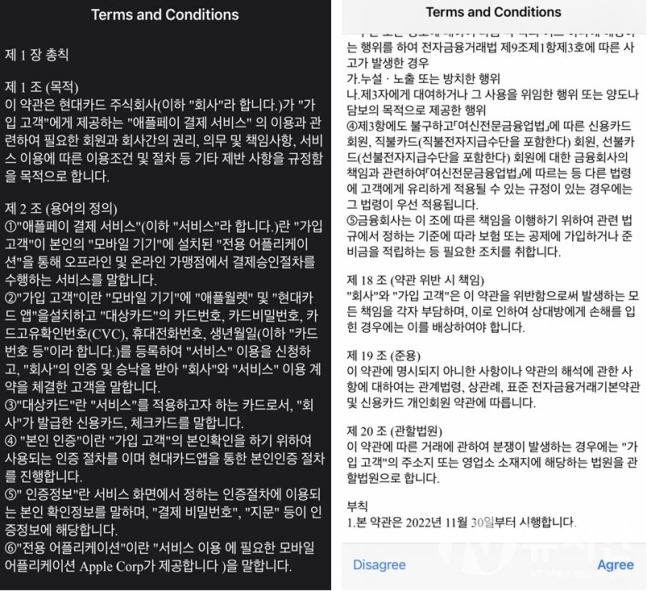 The screen captures of digital documents labeled “terms and conditions” in Korean said that “the purpose of this document is to regulate the conditions and procedures of the rights between our customers and the company, obligations and responsibility and more for the usage of Apple Pay services provided by Hyundai Card Corporation for our registered customers.”

“The terms and conditions will officially become effective from Nov. 30, 2022,” it added.

The official documents have yet to be officially released by Hyundai Card – which reportedly have an exclusive partnership with Apple Pay for its local release -- and the screen captures were anonymously uploaded on a local online community. The leaked documents were shared on social media on Thursday.

The leaked terms and conditions also stated that some of credit card lines issued by Hyundai Card will be available to be stored in Apple Wallet, an app where users can register their credit or debit cards so it can be used with Apple Pay.

Onlookers see the documents to be have been released by an American Express user, as a screen capture showed a representation of a Hyundai Card's Amex card.

Hyundai Card remained tight-lipped about the possible exclusive partnership and the timeframe concerning the launch of Apple Pay.

“We have nothing to say on the matter for the moment,” a Hyundai Card spokesperson said.

Rumors of Apply Pay launching its Korean services have circulated since 2020, but the payment firm has struggled to enter Korea mainly due to a lack of technological infrastructure here.

Most local retailers use the magnetic secure transmission technology, in which devices such as smartphones emit a signal that mimics the magnetic stripe on a traditional payment card. But Apple Pay works with the near-field communication technology, which is a short-range wireless technology.

Apple’s digital payments service, launched in 2014, has since expanded its Asian reach, including into China, Japan, Singapore and Hong Kong.