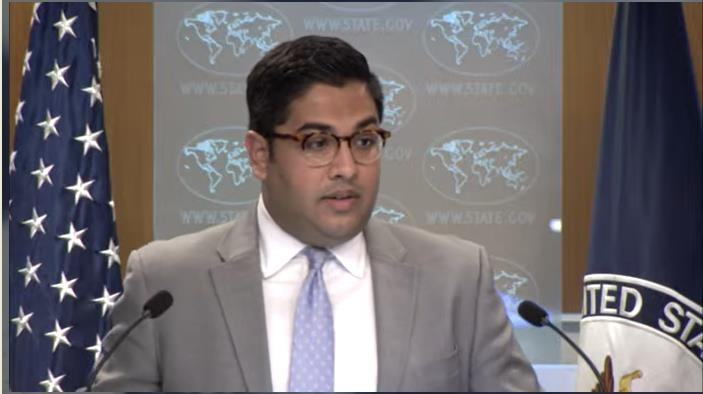 Vedant Patel, principal deputy spokesperson for the state department, is seen answering questions during a daily press briefing in Washington on Thursday in this image captured from the department's website. (US State Department)

WASHINGTON -- The United States has a range of ways to hold North Korea accountable for its provocative actions, a state department spokesperson said Thursday, one day after China and Russia blocked a US-led move to put UN Security Council sanctions on Pyongyang.

Vedant Patel, principal deputy spokesperson for the state department, also said the US continues to closely monitor North Korea and will take additional action if necessary.

"We continue to have a number of tools in our tool belt -- sanctions, other things -- to continue to hold the regime accountable," the spokesperson said in a press briefing.

"I don't have any specific actions to preview," he said when asked if the US is taking any concrete steps to punish North Korea for its recent missile launches. "But the United States is monitoring and watching closely and ready to take additional action as well."

Pyongyang also flew a group of eight fighter jets and four bombers near the inter-Korean border on Thursday in apparent protest against joint military exercises between South Korea and the US that it claims provoked its recent missile launches.

"Us participating in exercises in the region or engaging in bilateral or trilateral exercises is not something new," he said of the North Korean claim in a department press briefing.

"We have a long standing defense relationship with both South Korea and with Japan, and these are defensive exercises that are focused on how we would defend ourselves and how we would deter and they are not a threat at all to the region, unlike the provocative activities coming from North Korea," he added.

In response to North Korea's continued missile launches, the US has redeployed its aircraft carrier, USS Ronald Reagan, to the East Sea on Wednesday, nearly a week after the carrier left South Korean waters following a joint naval exercise with South Korea.

"These exercises send a clear message of allied unity between our nations and enhance the interoperability of our collective forces. The exercises also demonstrate the deep strength of our trilateral relationship with Japan and the Republic of Korea, which is resolute against those who challenge regional stability," he said, referring to South Korea by its official name. (Yonhap)