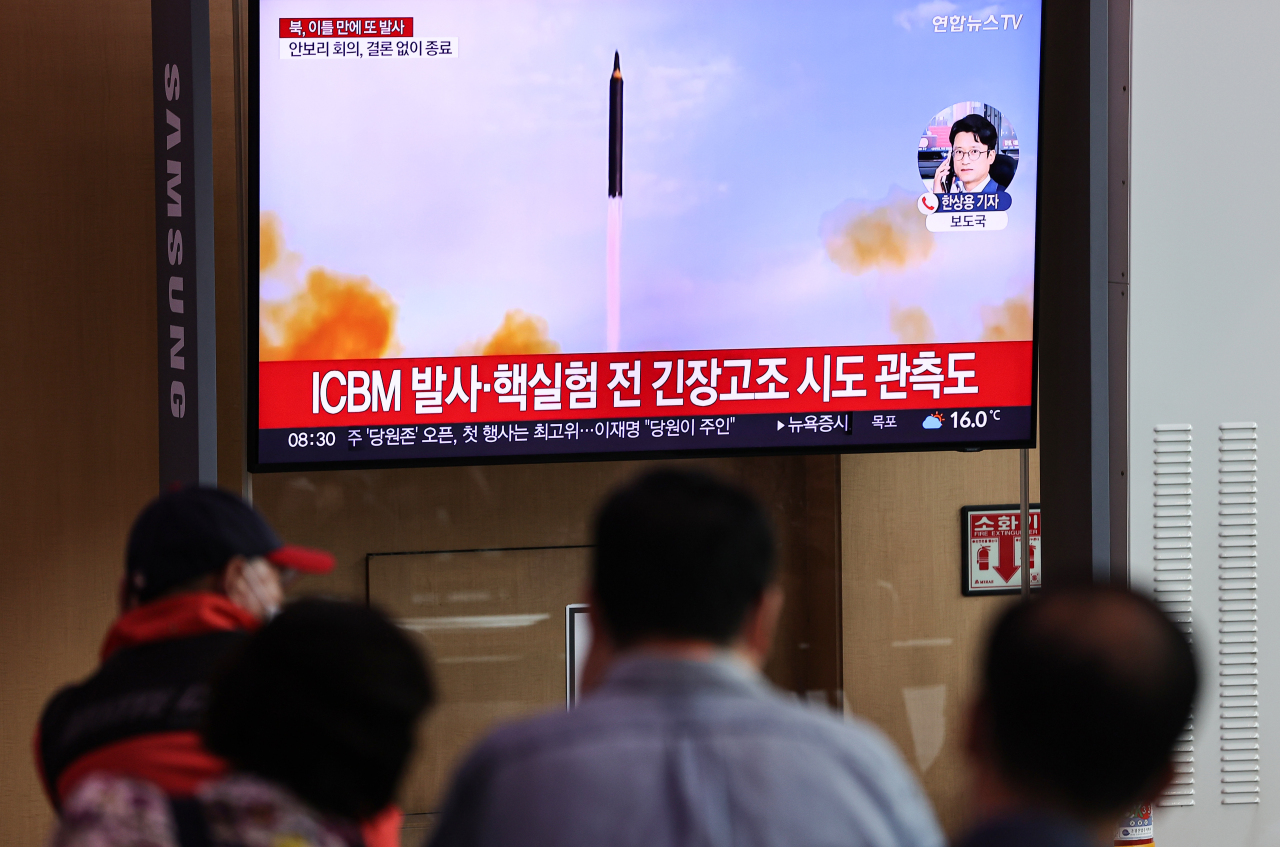 The latest missile launches have come as an apparent tit-for-tat military action against the redeployment of a US aircraft carrier near the Korean Peninsula on Wednesday.

In violation of multiple UN Security Council resolutions, the two ballistic missiles were fired a few hours after the UNSC convened an emergency meeting about North Korea’s Tuesday launch of a suspected intermediate-range ballistic missile.

The South Korean military detected the two short-range missiles being fired from the Samsuk area in the city of Pyongyang toward the East Sea between 6:01 a.m. and 6:23 a.m. Thursday, according to the Joint Chiefs of Staff.

The South Korean military has braced for North Korea firing a relatively newly developed KN-25 “super large-caliber” multiple-rocket launcher and a KN-23 solid-propellant short-range ballistic missile, in that order, according to a military source.

North Korea’s tit-for-tat strategy
Seoul-based experts view that North Korea’s recent spate of missile launches demonstrates the country’s resolve to take tit-for-tat military actions to counter moves by South Korea and the US to reinforce the alliance’s readiness and deterrence against mounting threats from North Korea.

North Korean leader Kim Jong-un has repeatedly warned of his country’s tit-for-tat strategy against the “US hostile policy,” expressing his intent to take corresponding measures against the US and South Korea.

Kim reaffirmed the “principle of strength-for-strength and head-on confrontation” at the party plenum in June, urging the country to press ahead with its weapons development and military buildup to defend the country’s right to self-defense and sovereignty.

In September, the North Korean leader also underscored that North Korea’s strength is bound to be reinforced in direct proportion to the level of the US “hostile policy” in his policy speech.

“The missile launches show North Korea’s intent to gain the upper hand (over the US and South Korea) based on its pronounced principle of strength-for-strength and head-on confrontation by taking counteraction against the deployment of the US strategic asset,” Lim told The Korea Herald.

“North Korea is also positioned to confront the move by the US and South Korea to step up their military response to (North Korean missile launches).” 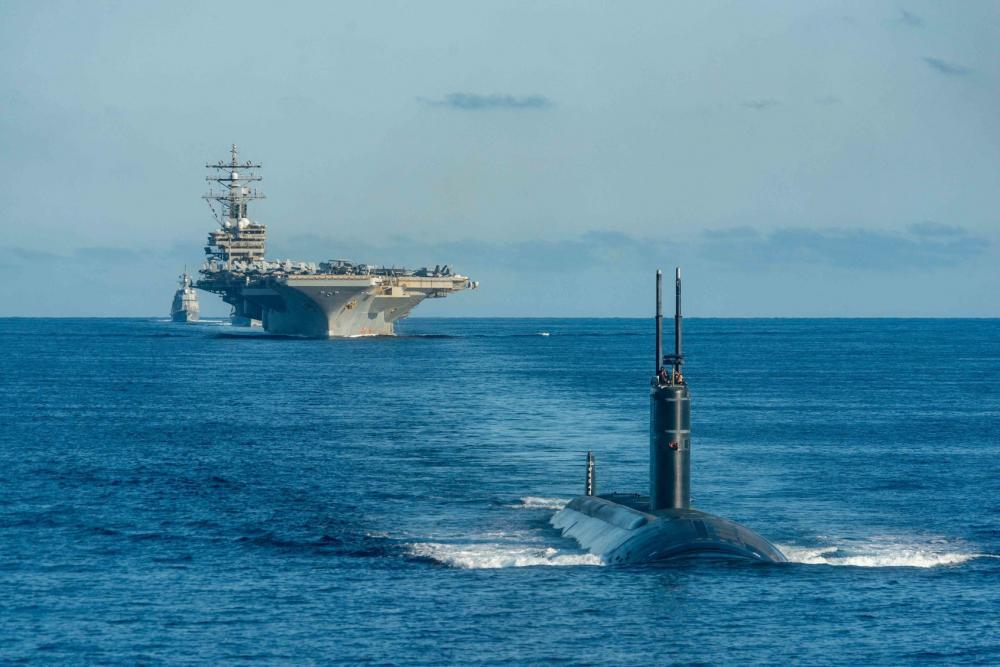 The US Navy’s Ronald Reagan aircraft carrier and the USS nuclear-powered submarine USS Annapolis participates in a trilateral anti-submarine warfare exercise between South Korea, the United States and Japan in the East Sea on Sept. 30, 2022. (US Navy)
Vicious cycle of provocations and deterrence
Echoing the view, Yang Moo-jin, a professor at the University of North Korean Studies in Seoul, said North Korea’s recent ballistic missile launches show its intention to “continue to take corresponding measures” against South Korea and the US, pursuing the principle of “strength-for-strength.”

“The Korean Peninsula will be locked in a vicious cycle of provocations and deterrence for a while,” Yang said.

In a nutshell, North Korea’s military tit-for-tat actions will lead to the allies’ measures to reinforce the US extended deterrence and improve the combined defense posture. And then, North Korea will take countermeasures against South Korea and the US.

In addition, complexity and uncertainty on the Korean Peninsula have been compounded by North Korea’s advancement of nuclear capabilities and the following move by South Korea, Japan and the US to reinforce military cooperation, among others, Yang said.

South Korea, Japan, and the US naval forces conducted two trilateral drills in a week with the participation of the Ronald Reagan Carrier Strike Group, for instance.

The three navy forces on Wednesday staged a ballistic missile defense exercise -- that aims to improve interoperability and coordination among participants in detecting, tracking and intercepting ballistic targets -- in the international waters of the East Sea.

A trilateral anti-submarine warfare exercise was conducted on Sept. 30 in the international waters of the East Sea, which are the first of its kind since 2017.

Yang also pointed out the “new Cold War” battle line in the region -- referring to trilateral cooperation among South Korea, Japan and the US against China, Russia and North Korea -- will further complicate regional security dynamics.

The ministry said the recent missile launches are the “just counteraction measures of the Korean People’s Army against South Korea-US joint drills escalating the military tensions on the Korean Peninsula,” referring to bilateral naval exercises from Sept. 26-29.

The USS Ronald Reagan Carrier Strike Group conducted exercises with the South Korean Navy’s fleet from Sept. 26 to 29 in the East Sea operational area, called the Korea Theater of Operations, after they entered a naval base in Busan on Sept. 23 for the first time since 2017.

Pyongyang’s Foreign Ministry also denounced the US for “unwarrantedly referring to the UNSC the just counteraction measures,” warning of consequences for the repositioning of the USS Ronald Reagan aircraft carrier.

The US Navy’s USS Ronald Reagan, a 100,000-metric ton nuclear-powered supercarrier, and its strike group were re-deployed in the international waters of the East Sea as of Wednesday in a very rare countermove to North Korea’s launch of a suspected intermediate-range ballistic missile the previous day.

But North Korea’s Foreign Ministry accused the US of “posing a serious threat to the stability of the situation on the Korean Peninsula and in its vicinity” by repositioning the strike carrier group in waters off the peninsula.

Aggressive nuclear doctrine
North Korea’s recent military actions also mark the first time it has fired ballistic missiles at a time when a US nuclear-powered aircraft was deployed near the Korean Peninsula.

“North Korea has adopted a very aggressive and radical nuclear doctrine -- which is reflected in a new nuclear law -- based on its confidence in nuclear capabilities,” said Park Won-gon, a professor in the department of North Korean studies at Ewha Womans University.

“Unlike in the past, North Korea seeks to demonstrate its nuclear capabilities despite the deployment of a US aircraft carrier -- which is the US strategic asset of the greatest significance -- in the region.”

How to break vicious circle?
Park viewed that the allies’ efforts will not be able to stop North Korea from advancing diverse missiles and nuclear weapons under its five-year defense development plan and to cut off the vicious cycle of provocations and deterrence

“There is little way to deter such provocations by North Korea until the country tips the balance by itself after driving the situation (of the Korean Peninsula) to the brink,” Park said. “North Korea might conduct a seventh nuclear test just before ending its brinkmanship.”

Yang forecast that North Korea will push forward with more intense weapons in a tug-of-war with South Korea and the US.

Lim said that it is important to keep in mind that “North Korea’s advanced missile and nuclear capabilities have enabled the country to take tit-for-tat action” against the US and South Korea, raising doubt on the allies’ approach to deter North Korea by enhancing the viability of the US extended deterrence and reinforce the deployment of the US strategic assets.

Earlier this week, North Korea’s propaganda outlets published articles dismissing South Korea and the US’ move to reinforce their deterrence and military readiness as “bravado” against a “nuclear weapons state.”

The North Korean state-controlled news website Uriminzokkiri claimed Wednesday that the US nuclear umbrella is no longer an “omnipotent shield” to protect South Korea from North Korea's “extremely strong self-defense military power”, denouncing the Yoon Suk-yeol government’s initiative to enhance the viability of the US extended deterrence.

“We should not simply take an approach ... just to deter North Korea, especially at a time when the country flexes its nuclear muscle,” Lim said. “We must come up with a sophisticated and comprehensive strategy to definitely gain the upper hand over North Korea. But for right now, our priority should be to seek fresh ways to wisely manage North Korea’s nuclear issues.”