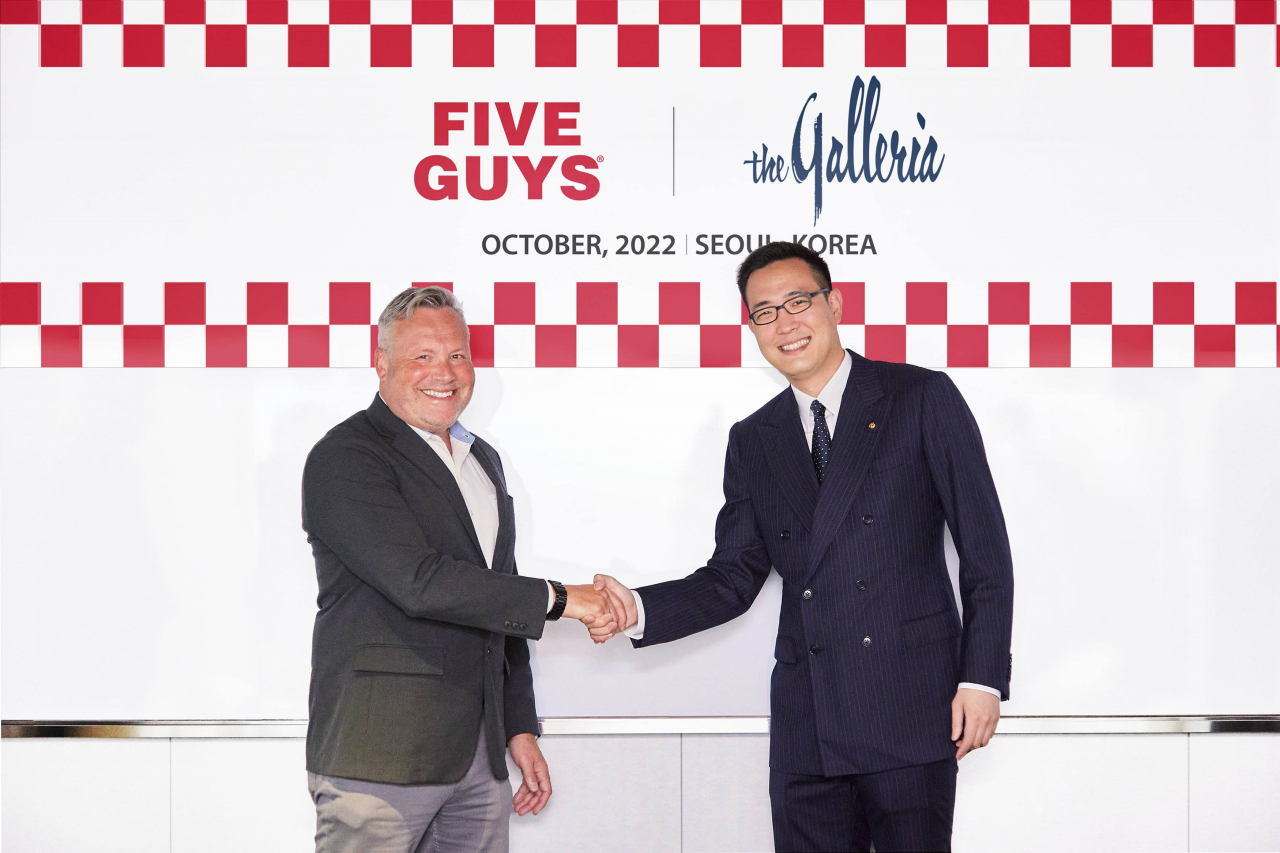 Kim Dong-sun (right), head of strategic management at Hanwha Galleria and director at Hanwha Hotel and Resorts, shakes hands with William Fisher, director of international expansion at Five Guys Enterprise, for a photo at The Plaza Seoul in Jung-gu central Seoul on Wednesday. (Hanwha Galleria)

Hanwha Galleria, the retail arm of Hanwha Solutions, will open the first branch of US fast food chain Five Guys in Seoul early next year, the company said Thursday, a day after its executive publicized it through his personal social media account.

On Wednesday, Kim Dong-sun, head of strategic management at Hanwha Galleria, uploaded a photo of himself on Instagram shaking hands with William Peecher, director of international expansion at Five Guys Enterprise, with a hashtag that translates to “(Five Guys) finally landed in Korea.” The 33-year-old executive is the youngest son of Kim Seung-yeon, chairman of the defense-to-chemicals conglomerate Hanwha Group.

The company said Kim has played a vital and proactive role in the whole business process with the Five Guys Enterprise since February, when he was appointed as head of the strategic management department.

“Since Five Guys considers delivering the authentic taste of their burgers as the top priority, Kim has made efforts to visit the US several times to pitch our business plan and successfully closed the deal,” a Hanwha official said.

The company said it is poised to open more than 15 stores within the country over the next five years, without disclosing details of the contract between the two.

Founded in 1986, Five Guys is a fast food chain based in Virginia. Operating around 1,700 stores in 23 countries, South Korea will be the fifth country in Asia where the chain operates.

The quick-service burger chain has topped the list for one of the best burgers in the US in 2020 and 2021, according to a survey conducted by Market Force Information. It is also known as a burger joint frequented by the former US President Barack Obama.