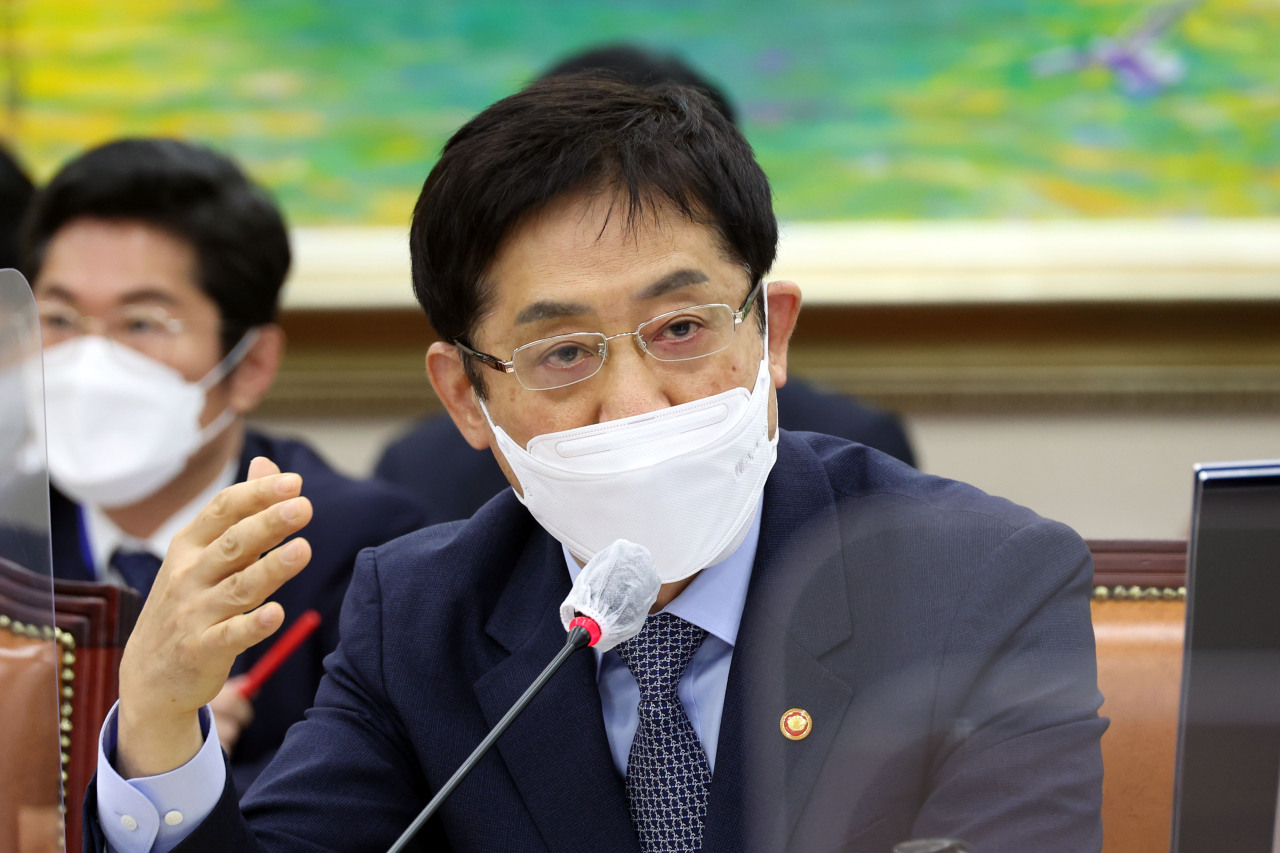 FSC Chairman Kim Joo-hyeon talks to lawmakers at a parliamentary audit held at the National Assembly in Seoul on Thursday. (Yonhap)
South Korea’s top financial regulator said Thursday that it is actively considering to disclose the identity of illegal short sellers amid growing criticism that the practice has been disrupting the local stock market.

The remark comes amid growing anger from retail investors that have been witnessing the value of their stock investments dropping sharply in recent months. Many are blaming illegal short selling, claiming that they are the victims in a market vulnerable to such practices by large institutional investors, onlookers say.

"We are almost finished with our internal reviews regarding disclosure of the names of the entities behind illegal short selling," Financial Services Commission Chairman Kim Joo-hyeon told lawmakers in a parliamentary audit.

"If necessary, we will actively push for the disclosure, even if it requires revisions to the law."

To bolster transparency in the nation’s short-selling practice, FSC would have to revise the Act on Real Name Financial Transactions and Confidentiality, which bans financial institutions from disclosing information or data related to their customers unless they receive permission to do so.

Rep. Yu Eui-dong of the ruling People Power Party pointed out during the audit that overseas investors were behind 94 percent of the 127 cases of illegal short selling that were found after the 2009 implementation of the Financial Investment Services and Capital Markets Act. Yu added that the FSC's earlier response regarding the large share of foreign investors in illegal short selling was due to the “foreigners’ lack of understanding of the Korean market.”

Last month’s data released Yu showed that the businesses and individuals accused of a total 127 cases of illegal short selling were let off the hook with only “light punishments” such as fines, ignited strong criticism from retail investors here. Of the 127 cases, 71 cases were slapped with fines each worth an average 160 million won ($114,000) and 56 cases were brushed off with only warnings, the watchdog Financial Supervisory Service data released via the lawmaker showed.

Short selling, a globally used risk-hedging strategy, is meant to help the market by adding liquidity and blocking price bubble creations. However, its critics say it can intensify market volatility and could be abused to manipulate price.

On the possibility of temporarily halting all short selling here, Kim refused to give a direct answer, hinting that the FSC is not considering the option for the moment. Financial authorities had temporarily banned short selling in 2008, 2012 and 2020 to stabilize the stock market from global risks.

Korea's benchmark stock index Kospi has dropped nearly 27 percent since the beginning of the year to close at 2,237.86 on Thursday, disappointing investors.

“We agree that closing the information from the public will only fuel further distrust,” Kim said, pledging to bolster transparency.