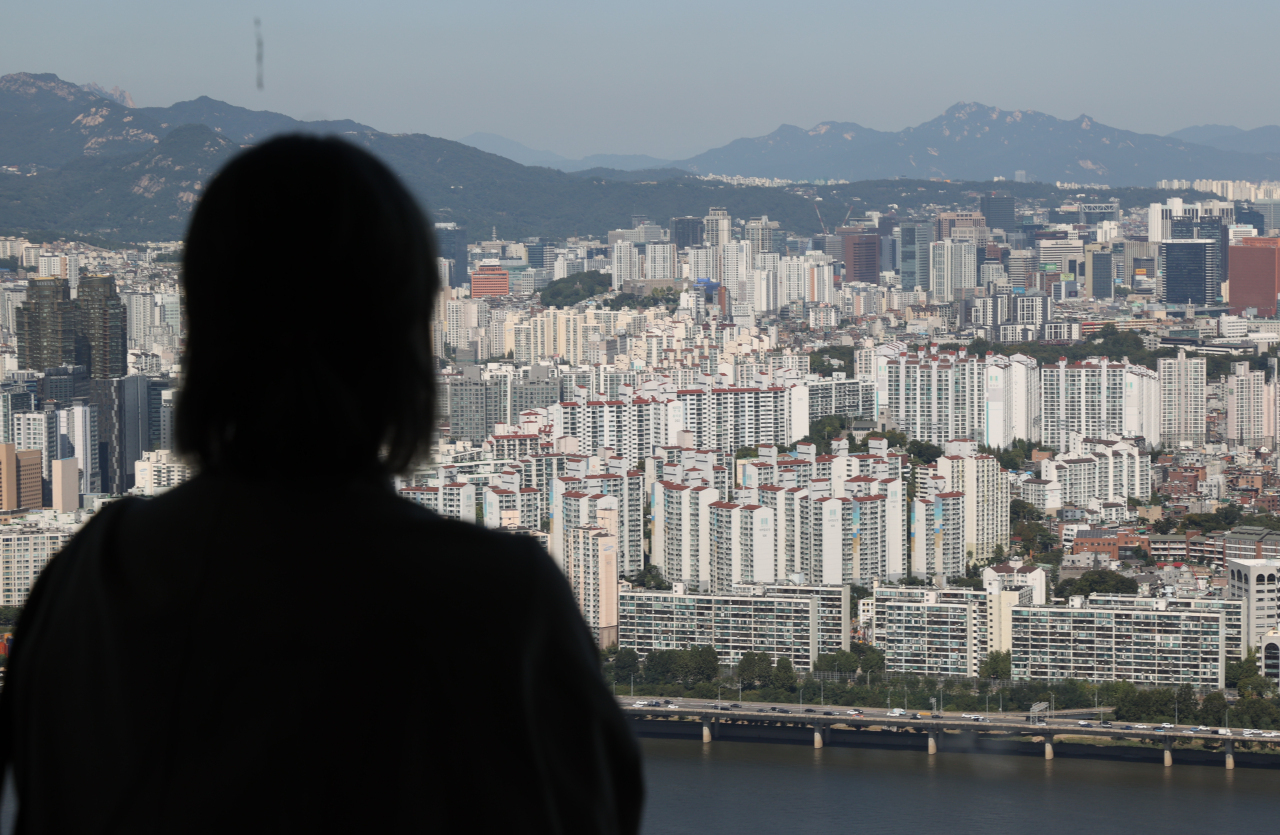 Aerial view of apartment complexes in western Seoul (Yonhap)
진행자: 최정윤, Brolley Genster
[1] Four out of 10 households in South Korea are projected to be single-person by 2040, with the portion of families of four or more – once the most common form of family here – shrinking to 10 percent, a report showed Monday.
*portion: (더 큰 것의) 부분[일부]
*shrink: (규모양이) 줄어들다 /줄어들게 하다

[2] According to a report compiled by KB Financial Group, the number of single-person households was 7.1 million, or 33.4 percent of the total, last year. And the figure is expected to reach some 9 million by 2040, taking up 37.9 percent of the total households here. On the other hand, households of four or more are mired in constant decline. Last year, they made up 18.8 percent, or 4 million households, but the portion is expected to be reduced almost in half to 10.1 percent by 2040.
*mired in: ~의 수렁에 빠지다
*make up: 차지하다/ ~를 이루다, 형성하다

[3] Apartments were the most popular choice of residence type among single-person households, with 36.2 percent of the respondents living in them, compared with 33 percent in 2020. Those living in single private houses or villas -- a building with fewer than four floors and with small, low-priced apartments -- came to 35.3 percent, declining from 39.6 percent in 2020.
*residence: 거주지
*villa: 빌라

[4] “Defying the myth that one-person households spend more than they save with their ‘you only live once’ mindset, they have become smarter with managing their money by increasing their savings,” the report noted.
*defy: 반항, 저항, 거역하다
*myth: 신화, 근거 없는 믿음
원문 보기: https://www.koreaherald.com/view.php?ud=20221003000130

2. ‘Leeds era’: How one English city's name became a buzzword in Korea

[1] Buzzwords come and go in Korea after a few years. But one has stood the test of time -- “Leeds era,” which is read as “lijeu sijeol” in Korean. The term, believed to have originated from online football communities around 2005, is used to refer to a period of one’s greatest success or popularity, similar to a heyday or a golden era. It is used in various contexts including the appearance of celebrities to the performance of athletes.
*buzzword: 유행어
*stand: 이겨내다
*heyday: 전성기, 한창때, 최고 잘 나갈때

[2] According to the Open Korean Knowledge Dictionary, run by the National Institute of Korean Language, Leeds in the term refers to the city of the same name in northern England. The expression is linked to the city’s professional football club Leeds United and its now-retired player Alan Smith.

[3] In 2005, Park Ji-sung joined Manchester United and this made Korean football fans become more familiar with other players at the club. Among them was Smith.The now 41-year-old used to play for Leeds United before moving to Manchester a year before Park did. During the Leeds era, Smith had pulled off outstanding performances. His move to Man United, however, was marred with controversies and injuries.
*pull sth off: 성공하다, 해내다
*mar: 손상시키다, 망치다 (ruin)

[4] Some Korean fans began to compare his performances at Manchester and Leeds in online spaces. What began as references to his days at Leeds United as the Leeds era soon became a term to describe footballers in their prime in general. Now the phrase is used more commonly outside online football communities.
*in one’s prime: 전성기