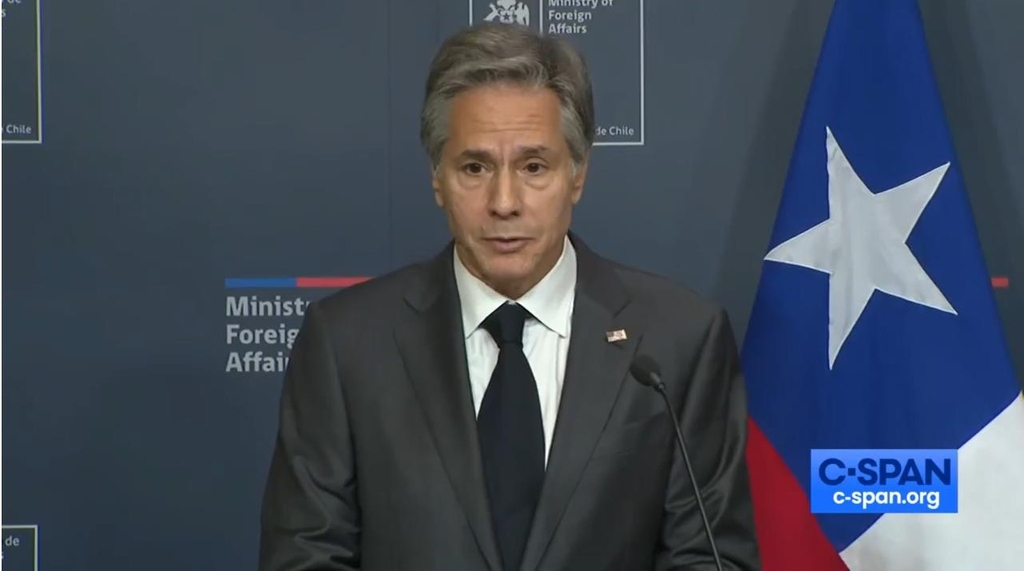 US Secretary of State Antony Blinken is seen speaking in a joint press briefing with his Chilean counterpart in Santiago on Wednesday in this image captured from the website of US news network C-Span. (Yonhap)

WASHINGTON -- US Secretary of State Antony Blinken urged North Korea to engage in dialogue on Wednesday, saying its provocative actions will only lead to increased condemnation and isolation.

The top US diplomat said the North will also face increased repercussions from the international community if they continue to take such actions.

"We believe that North Korea would be much better served by not only refraining from these actions, but actually engaging in dialogue," Blinken said in a joint press briefing with his Chilean counterpart in Santiago.

The North fired an intermediate-range ballistic missile on Tuesday (Seoul time), marking its fifth missile test in just over a week.

Blinken said the US has called for a meeting of the UN Security Council, adding, "and we are consulting with our partners on next steps."

"We called on the DPRK to refrain from further provocations and engage in a sustained substantive dialogue," he said of his calls with his South Korean and Japanese counterparts held immediately after the North's missile launch this week.

"This is something that we have proposed going back many months. Unfortunately, the DPRK's response has been to launch more missiles, but we are taking appropriate defense and deterrence steps with allies and partners," he added.

"I also want to make very clear that our commitment to the defense of our allies and partners -- ROK and Japan -- is ironclad," said Blinken, referring to South Korea by its official name, the Republic of Korea. (Yonhap)