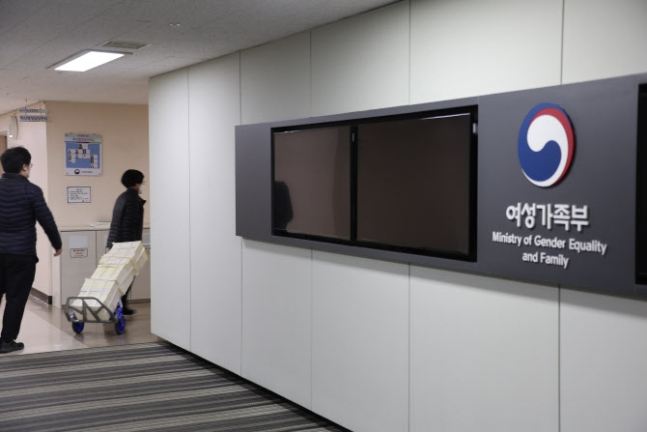 The government is speeding up the abolition of the Ministry of Gender Equality and Family, a pledge made by President Yoon Suk-yeol when he was a presidential candidate.

The ruling People Power Party and the government have been considering transferring the main roles and functions played by the Gender Ministry to the Health and Welfare Ministry’s new headquarters since Yoon took office.

The Democratic Party, however, remains cautious.

Democratic Party spokesperson Oh Young-hwan told reporters after the report, "We clearly conveyed serious concerns that its bargaining power with other ministries could be weaker when (the Gender Minister) was demoted to the vice minister-level, because the minister is not a member of the State Council."

The spokesperson added that while his party “does not necessarily insist” on keeping the ministry’s name, “crimes against women, such as the stalking murder at Sindang Station, are still repeating, and the United Nations also recommends that there be an independent ministry related to gender equality."

Gender Equality Minister Kim Hyun-sook confirmed the abolition of the ministry and said that it was coordinating details with the Ministry of the Interior and Safety in a local radio interview on Wednesday morning.

When asked about the discussion within the government about the abolition, Minister Kim said, "It is not completely over yet," adding that ministry was “fine-tuning with the Interior Ministry."

To the question of whether the core functions of the Gender Ministry would be transferred entirely to the Health and Welfare Ministry, rather than several bodies, Minister Kim replied, “In general, it is possible to do so.”

It was not specified what the core functions were, but the ministry has some roles that do not directly relate to gender equality, such as refugee assistance and specific areas of support for foreign residents

Regarding the reason for abolishing the ministry, she said, “I have been working as a minister for four months and (I found) that there are very few things that the ministry can do in its current form.” She added that she thought it’d be better to change the ministry “to a bigger frame.”