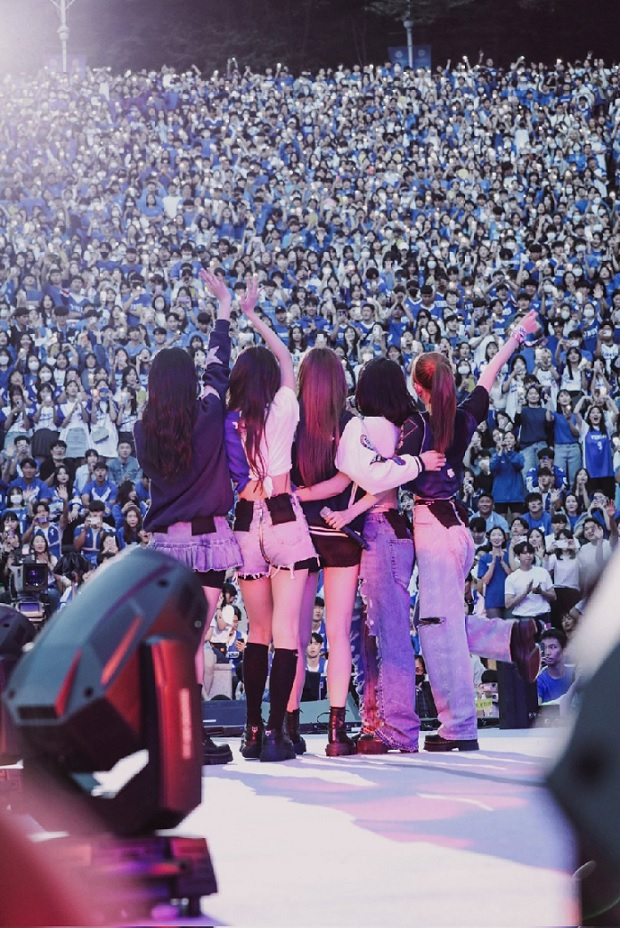 Members of rookie girl group Le Sserafim pose for a photo during their performance at Yonsei University's "Akaraka" festival, held on Sept. 24. (Twitter)

With cooler and crisp air, the season of university fall festivals has arrived.

Since mid-September, major universities across the country are holding their biggest and most exciting campus event of the year.

During the past two years of the pandemic, university festivals had faced a hiatus, like many other in-person events. But with social distancing rules and the outdoor mask mandate lifted, the festivals are back in all their glory, with their typical elements of K-pop, student-run food stalls and a whole lot of fun.

Here are some of the characteristics of Korean university fall festivals.

The highlight of a university festival here is undoubtedly a megamusic concert featuring professional acts.

Yonsei University’s annual “Akaraka” festival held on Sept. 24 -- arguably among the best in Seoul -- was just like a major K-pop festival, with some of the hottest acts taking the stage. They included NewJeans, Ive, Le Sserafim, Zico, and Winner.

K-pop music is a must for other college festivals. 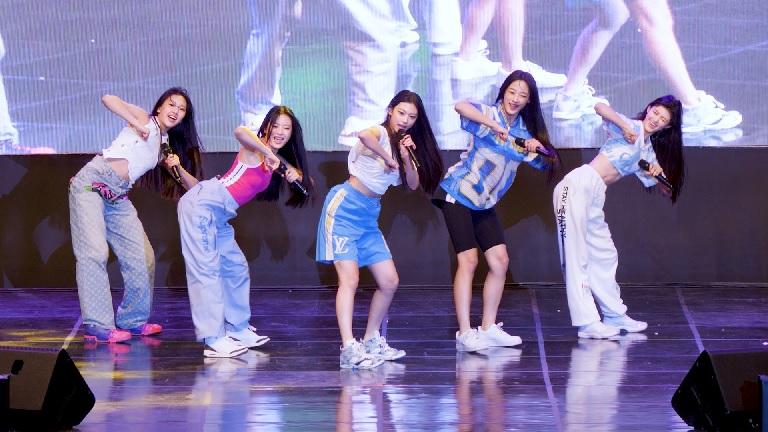 Just like other music festivals, student councils compete with each other to enlist the most sought-after acts to please the festival crowd. They usually unveil the concert’s lineup just a few days before the event, drumming up anticipation and excitement for the day.

While most concerts are open to the public and free to enter, some festivals -- including Yonsei University’s “Akaraka” and Korea University’s “Ipselenti” -- require tickets for entry, which cost 15,000 won ($10) per person.

These universities usually open websites for reservations on a certain date, and the tickets are sold on a first-come, first-served basis.

For some festivals, you might not need to purchase the tickets if you are invited by a friend who attends the host university.

K-pop is a relatively new addition to the fun of university festivals. What they are most known for are the food stalls set up and run by students.

During the festivals, dozens of food and drink booths pop up, inviting students and visitors to chill out anywhere on the green lawn of the campus. 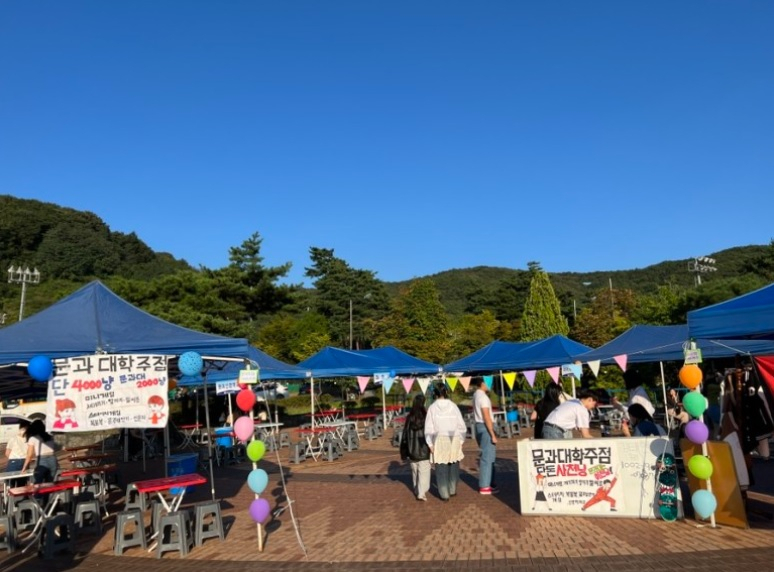 At Dankook University on Sept. 21, members from the student council, school clubs, and different departments set up their own stalls, where members -- most of them with very little experience in cooking -- prepare popular street snacks like tteokbokki (spicy rice cake), instant noodles or anju (side dishes usually paired with alcohol) like savory pancakes. These food stalls are a typical way of raising funds for the associated organizations.

“Last year, I didn’t have enough opportunities to participate in gatherings or interact with university friends on campus due to COVID-19 and strict social distancing rules. Eating outdoors with friends without masks on, I truly feel like I’m enjoying campus life,” said Kim Ji-ah, a 22-year-old student at Dankook University who majors in political science and diplomacy.

The food stalls resemble “pojangmacha,” tented outdoor food stalls offering booze and food, usually on sidewalks. These vendors, however, only sell soft drinks or fruit juice, as the sale of alcoholic beverages by students on campus has been banned since 2018 due to concerns over underage drinking and alcohol-related accidents.

But that doesn’t mean school festivals are alcohol-free.

By forming partnerships with local liquor manufacturers and breweries, many universities have been launching separate booths where students can grab a drink.

School festivals open up the stage for student clubs, inviting them to perform or participate in singing or dancing contests.

During such events, extracurricular clubs such as dance crews and rock bands showcase performances that they have been practicing for months. Crowds and loud music fill areas around campus, and sing-alongs among spectators fire up the festive mood.

Lee Seo-jung, a student at Ewha Womans University, was surprised when students from other universities came over to see dance performances at her school’s fall festival held on Sept. 14.

“I heard many dance clubs at my university had been anticipating this year’s fall festival because the festival had been halted for almost three years due to the COVID-19 pandemic. I think campus festivals are the best place for students to express their talents and enjoy their youthful spirit,” she said.

During university festivals, one can easily find outdoor recreation stations where various entertainment facilities are set up.

On a recent Friday afternoon at Seoul National University of Science and Technology’s fall festival, a group of students crowded a dart shooting gallery featuring a bunch of colorful balloons worth various points. A variety of stuffed dolls for prizes were laid out on a picnic mat. 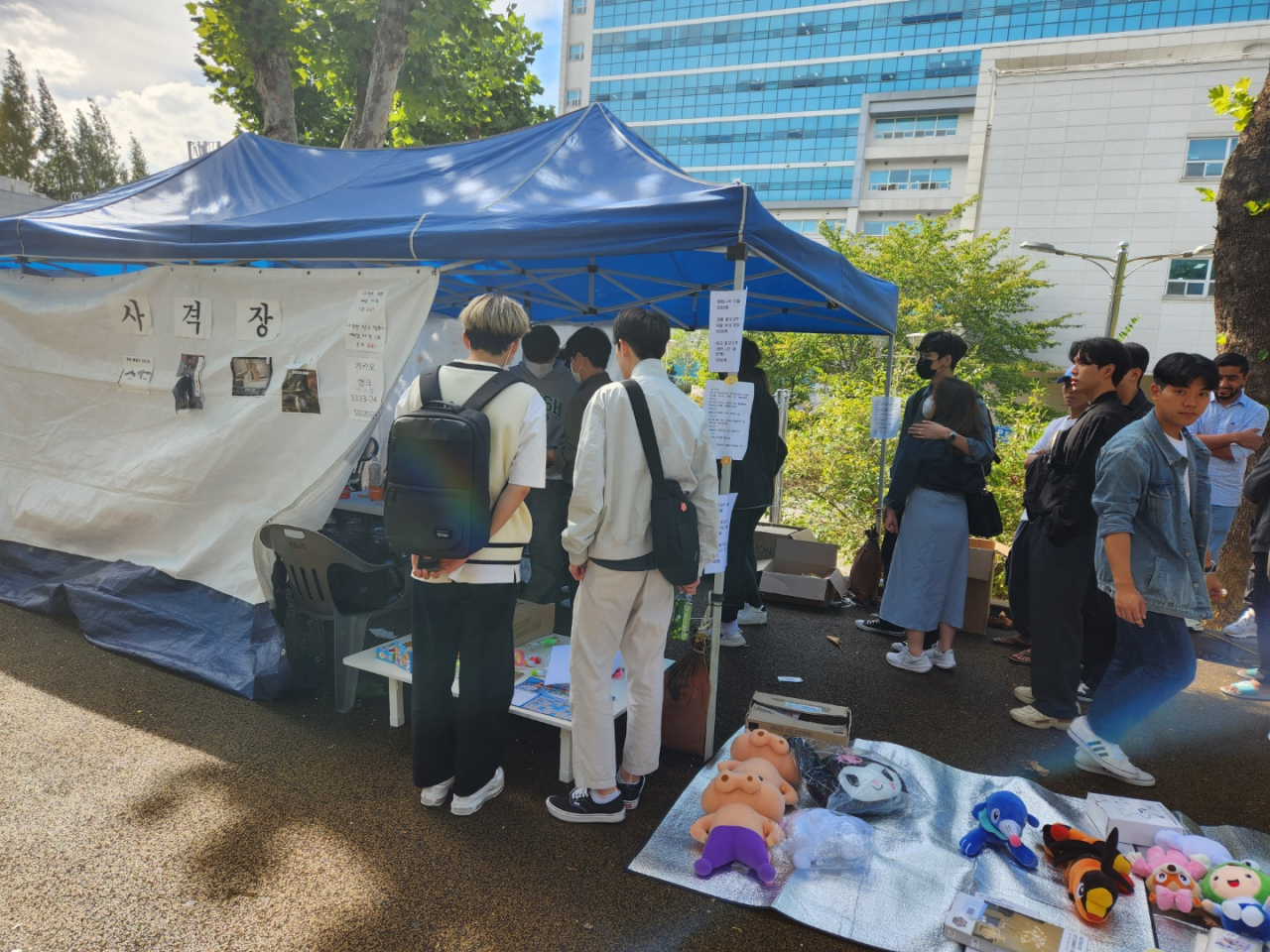 The main festival street, stretching from the open grass area to the school’s main gate, was bustling with a host of flea market booths where young merchants sold handmade accessories and vintage clothes. The merchants were those who partnered with the university's student council in advance, organizers said.

The festive mood heightened when a student-run singing contest started. The contestants sang their hearts out, surrounded by peers sitting on the grass and clapping.

Students play on a Pump It Up dance machine at Seoul National University of Science and Technology's fall festival held on Sept. 23. (Choi Jae-hee / The Korea Herald) 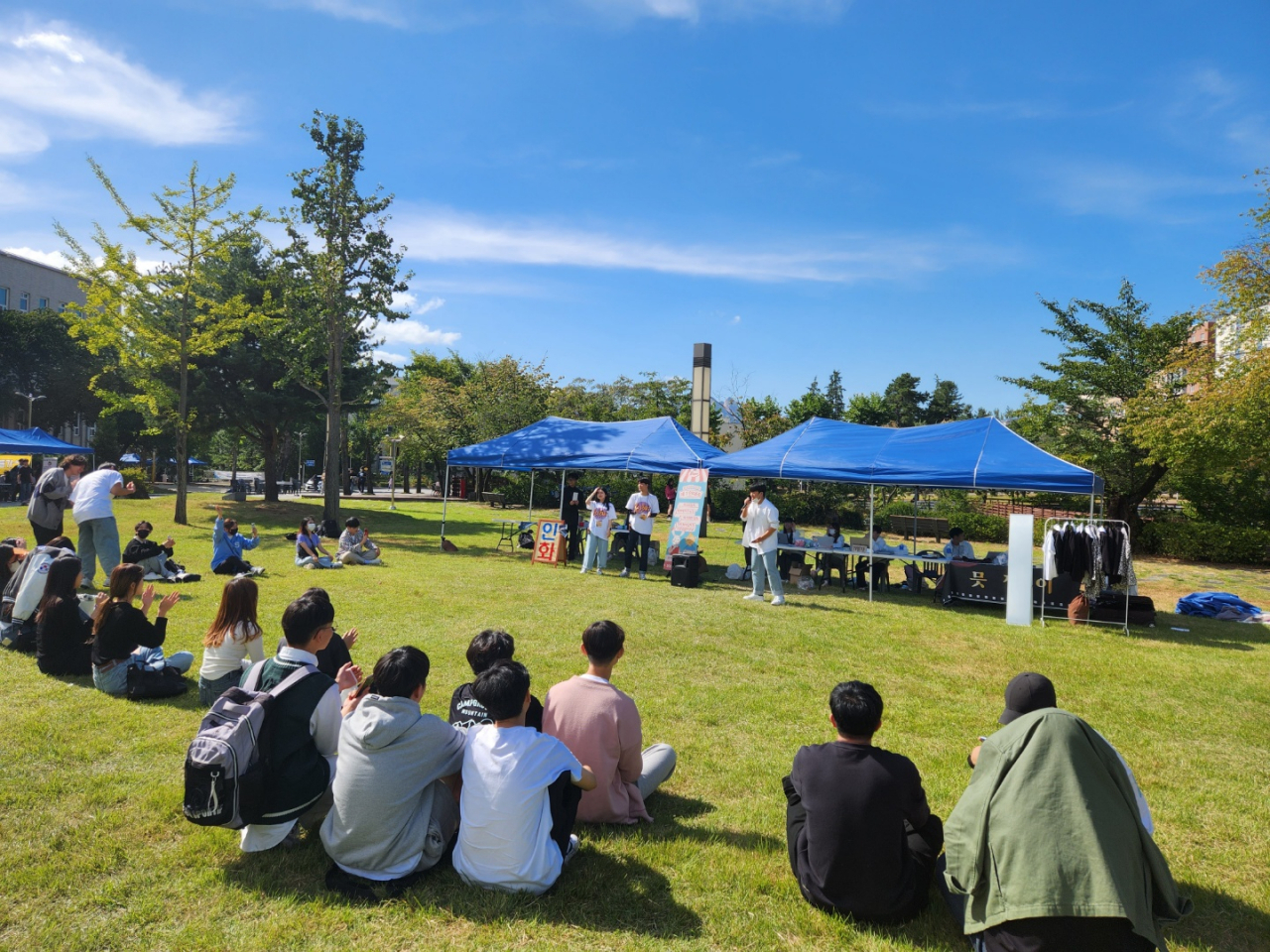 A student sings in front of peers and passers-by at Seoul National University of Science and Technology’s fall festival, held on Sept. 23. (Choi Jae-hee / The Korea Herald)