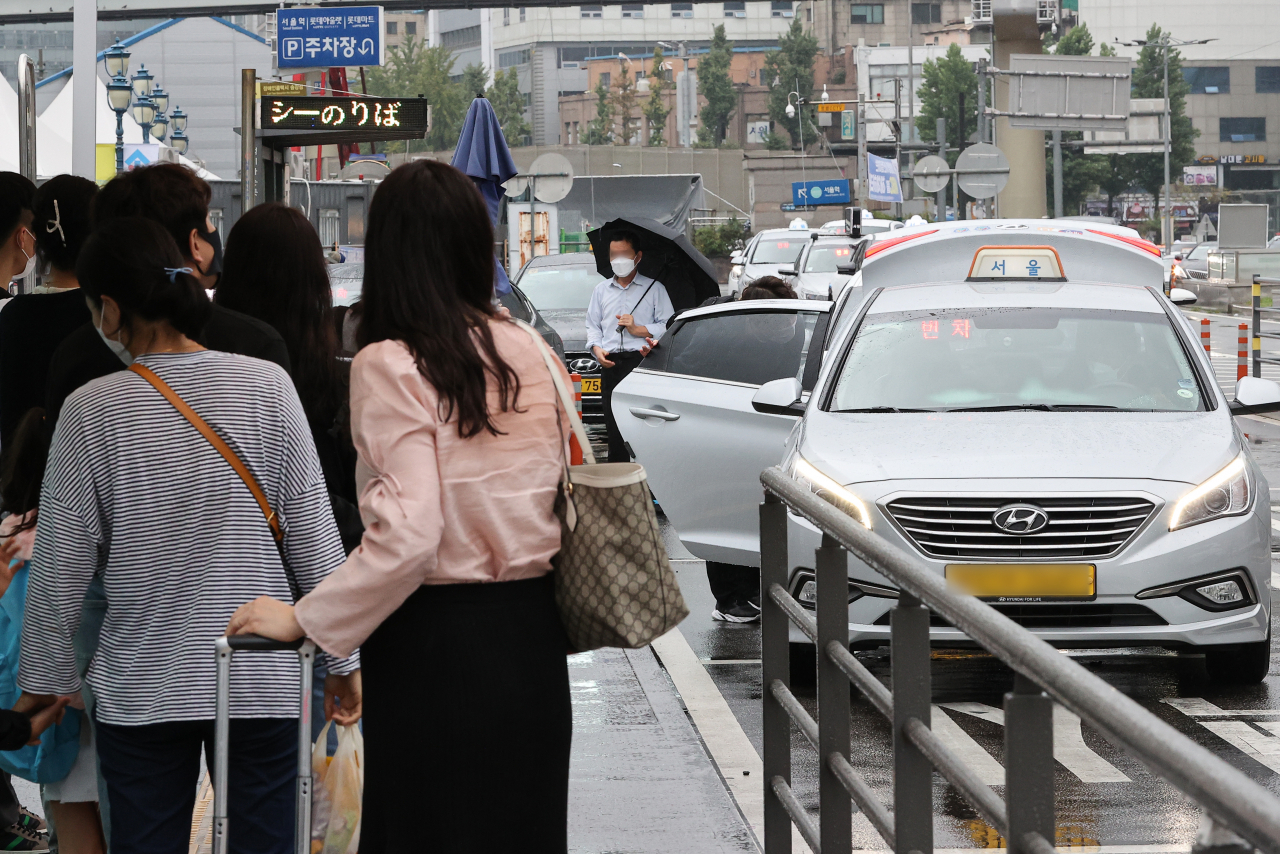 People waiting in line at a taxi stand in Seoul Station during rush hour on Tuesday. (Yonhap)

The government will raise late-night taxi-hailing fees to 5,000 won ($3.49) which will go into the pockets of taxi drivers, not platform companies, to bring back drivers who left the industry during the pandemic curfew, the transport ministry said Tuesday.

According to the plan devised to resolve the nighttime taxi shortage, taxis operating from 10 p.m. to 3 a.m. will receive up to 5,000 won as hailing fee. When the midnight basic fare is added, passengers in Seoul are likely to pay more than 10,000 won for taking cabs late in the evening. The Seoul metropolitan government has been mulling a raise in the taxi basic fare to 4,800 won from the current 3,800 won starting next February. A 20 to 40 percent premium in fares is also being considered to taxis operating from 10 p.m to 4 a.m.

The plan came after the government's analysis on the ongoing taxi shortage that found that an insufficient number of drivers to operate taxis as the main cause. Many taxi drivers left in the past three years when the country implemented a series of social distancing measures including a taxi curfew.

In the case of Chuncheon, Gangwon Province, where the system was lifted in April, the number of taxis operating at night increased by 30 percent.

Corporate taxi drivers will also be able to work part-time, including during Friday and Saturday nights only.

They will also be allowed to park the cabs at their residence or directly hand over the cab to the next driver once their shift is over to relieve them from the burden of having to return the cabs back to the company’s parking lot after nighttime shifts.

Transport minister Won Hee-ryong said that the government will consider allowing midnight operations of taxi hailing businesses such as Uber and Tada that have been banned for years amid strong resistance from taxi operators.

“There has been disputes over the past few years regarding services provided by Tada and Uber but we will no longer compromise on the vested interests that stand in the way of innovation. We will allow new platform services that operate during nighttime or rush hours,” he said.