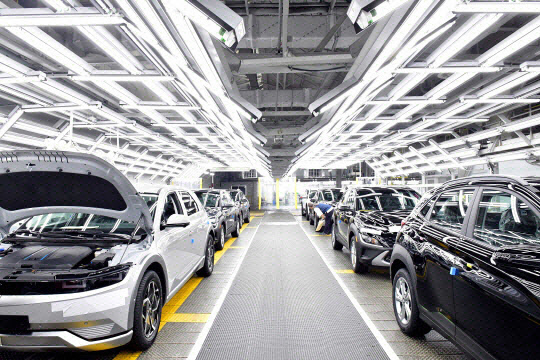 Hyundai Motor Group’s electric vehicle sales in the United States dropped significantly last month after a new US act that excludes tax benefits on vehicles produced outside of the US took effect, data showed on Tuesday.

The drops in South Korean EV sales were widely seen as the result of the Biden administration’s Inflation Reduction Act which took effect on Aug. 16. The bill allows up to $7,500 in tax credits for EVs made in the US, leaving out major Korean EV makers like Hyundai and Kia. All EV models by Hyundai and Kia are manufactured in Korea and exported to the US.

But an industry insider close to the matter said it is difficult to say that such a drop in US sales reflects the immediate effect of the EV tax credit act.

“September is normally the time when consumer demands wane, so it is natural to see that the sales of new EV models introduced earlier this year are diminishing,” said an industry insider, adding that unstable supply of automotive chips has attributed to the sales fall last month.

Although Hyundai Motor Group is seeking to manufacture EV models at its US plants including the one in Alabama starting with electrified GV70, industry experts said the carmaker would have to wait until the construction of its Georgia plant is completed. The Georgia plant is Hyundai Motor Group’s $5.5 billion EV-dedicated plant targeting for mass production of some 300,000 cars annually from the first half of 2025.

Meanwhile, Hyundai Motor’s overall sales in the US inched up by 11 percent on-year in September, recording a total of 59,465 units sold. Kia sold a record-high 56,270 units in the US last month, led by popularity of its SUV models, the Sportage and Telluride.