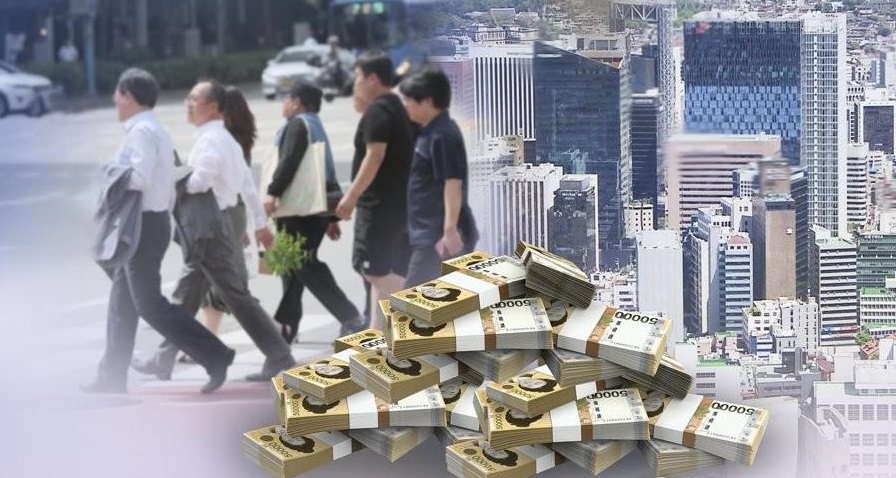 Representations of South Korea`s national debt is shown in this illustration. (Yonhap)
Countries with high income inequality and national debt have reported more COVID-related deaths in the first year of the pandemic, a report showed Tuesday.

Of the 38 Organization for Economic Cooperation and Development member nations, those with a high Gini coefficient -- a gauge of economic inequality such as levels of income -- and high national debt saw the most deaths from COVID-19 in 2020, a report released by the Korea Institute of Public Finance said.

“Our research showed that if a country has a long life expectancy, relatively low government debt and relatively less polarized income system, its COVID-related deaths were overall low in 2020,” the report said.

Though the report didn’t name the countries with the highest Gini coefficients, World Bank has listed South Africa, Namibia, Brazil and Honduras as those with the highest income inequality in its 2020 Gini Index.

South Africa, notorious for having the lowest level of income equality in the world, reported some 25,000 COVID-related deaths until end-2020 following its first outbreak in March 2020, data from the country's health authorities showed. South Africa's total population amounts to some 59 million.

On the other hand, Belarus -- a central European country of 9.3 million named by World Bank as a country with one of narrowest income gaps -- reported some 1,300 COVID-related deaths since the first outbreak in March 2020 to end-2020, according to its health authorities.

Meanwhile, data from the International Monetary Fund released in 2021 showed Venezuela, Japan, Greece, Italy and Portugal as the countries with the largest national debt burdens as of 2020.

The report also analyzed correlations between the size of the governments’ COVID-19 financial programs and their economic growth.

At the time, the size of Korea’s emergency financial program was 13 percent of gross domestic product, while Germany’s was 39 percent and Japan’s was 44 percent.

“The analysis showed that the correlations between the size of the financial program and the economic growth was not simple and affected by various external factors,” the report said.

“Government spending, debt management and polarization in the society work as crucial factors when a country is handling a crisis.”