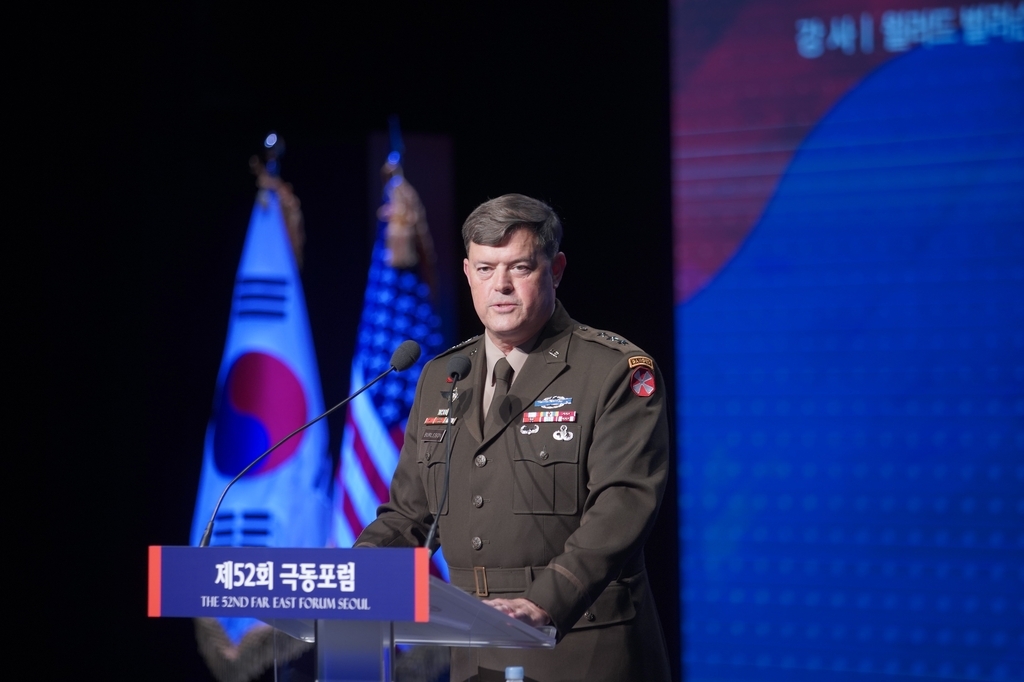 Lt. Gen. Willard M. Burleson, the commander of the Eighth US Army, speaks during the Far East Forum hosted by the Far East Broadcasting Co. in Seoul on Sept. 30, 2022, in this photo provided by the broadcaster.(Yonhap)

A top US military officer in South Korea stressed the importance of maintaining the "ironclad" alliance between the two countries Friday, as he decried North Korea, China and Russia as a threat to peace in Northeast Asia and beyond.

Lt. Gen. Willard M. Burleson, the commander of the Eighth US Army, delivered a lecture on the alliance as Seoul and Washington are moving to deepen and broaden the alliance amid Pyongyang's evolving military threats and Beijing's growing assertiveness.

"Both the United States and the Republic of Korea are confronted by more than one country that seeks to compete with our values and our way of life," the commander said during the Far East Forum hosted by the Far East Broadcasting Co. in Seoul.

"We have stood shoulder to shoulder here for years as a promise to this region that freedom and democracy are not going anywhere without a fight. And it's not just North Korea, but China and Russia also threaten peace both in Northeast Asia and the world," he added.

Noting the allies are in an "era of persistent conflict," Burleson highlighted the need for the alliance to remain robust.

"The commitment to our ROK-US alliance must remain ironclad," the general said, referring to South Korea by its official name, Republic of Korea. "It may be more important now than any time since the end of the Korean War."

"I find that (motto) to be very appropriate in the discussion and the time that we're in today," he said. "Freedom and democracy come with a cost and that cost is a commitment to ensure that our militaries deter our adversaries from undermining our values and the international rules-based order."

The commander then cited a famous quote from the movie, "Top Gun: Maverick," to underscore the importance of service members' roles for peace.

"It's not the plane, it's the pilot," he said. "That's a strong reminder ... that is the soldiers, sailors, airmen and marines that make a difference and are prepared to sacrifice for our freedom and values." (Yonhap)