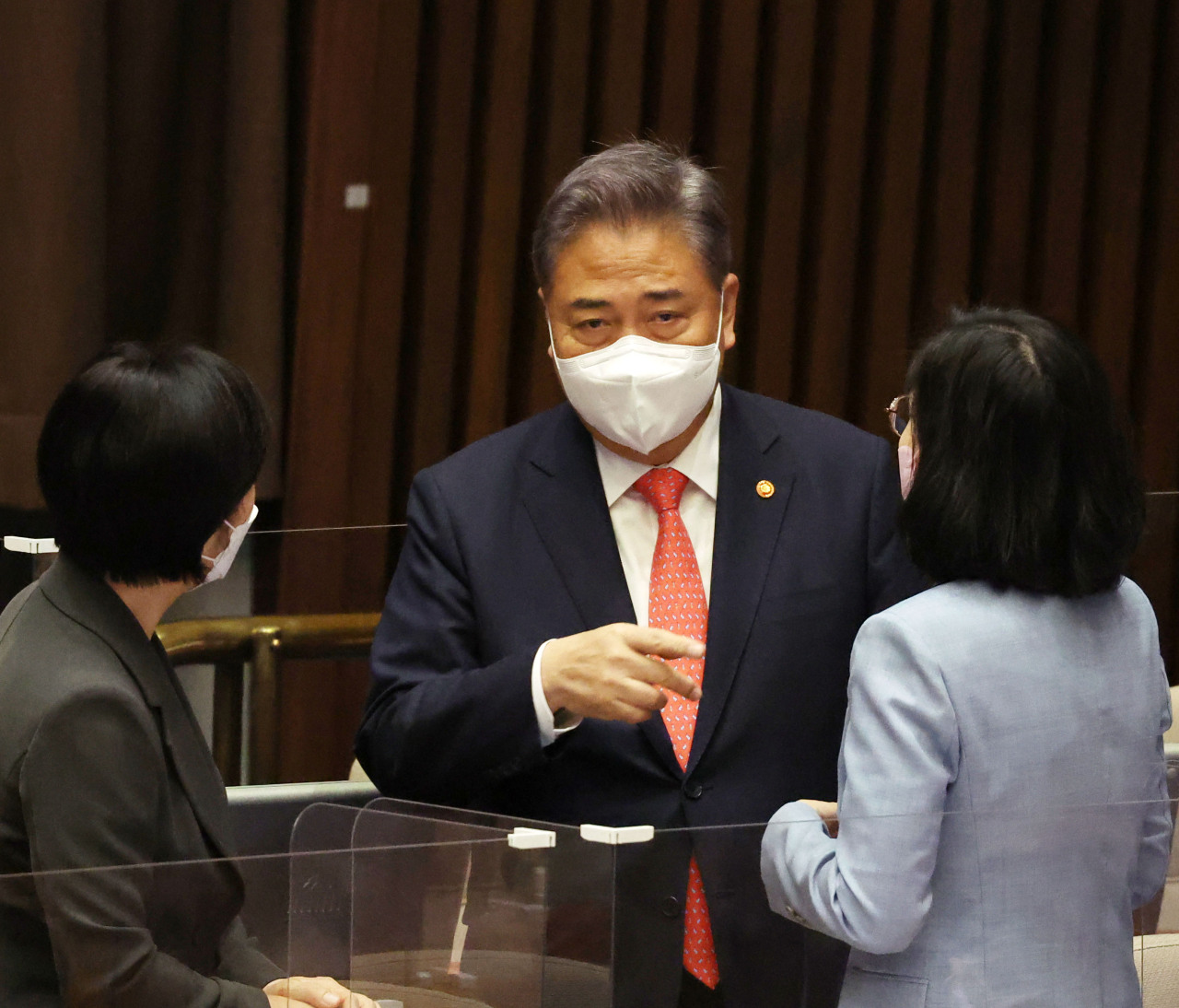 The motion was put to a vote in a National Assembly plenary session, which resumed at 6 p.m. The motion it was passed with 168 votes, mainly from the main opposition party, which holds a majority -- 169 out of 299 seats -- in the National Assembly.

The session had been delayed as the rival parties struggled to come to terms on the motion.

Despite the no-confidence motion, it appears unlikely that Park will be replaced now, as the request is nonbinding and the president has the right to dismiss it.

Yoon and the ruling People Power Party have dismissed the opposition’s accusations of diplomatic mishaps.

During a session with media on Thursday, Yoon defended Park.

“Foreign Minister Park is a remarkably capable person and is constantly on the move around the world for the sake of the national interest to the point that I‘m worried about his health,” Yoon told reporters. “I think the public is clearly aware of what is right and wrong.”

Yoon’s remark suggested that he is unlikely to dismiss Park or hold him responsible for the developments during Yoon’s overseas trip.

Park himself also said Thursday that he would not step down unless Yoon ordered him to do so and that he would follow the wishes of the president.

The presidential office and ruling party have been feeling the pressure over Yoon’s troubled overseas trip last week, in which he visited the UK, US and Canada. The opposition party has labeled it a diplomatic fiasco, blaming the administration for the lack of tangible diplomatic outcomes, as well as Yoon’s use of foul language caught on a hot mic during a trip to New York.

During a speech at the National Assembly, Rep. Chung Jin-suk, interim leader of the ruling People Power Party, called the Democratic Party‘s attempt to pass the motion “an act of self-harm to national interests and irresponsible account that does not care for the future of the country, which cannot be found even in third world countries.” Chung also raised his voice, saying that the Democratic Party is going beyond making “dirty tricks” and now “sowing hatred and curses on the president.”

The ruling party attempted to hold off the motion to the last minute, with its leaders appealing to National Assembly Speaker Kim Jin-pyo earlier in the day.

During his meeting with Kim, People Power Party Floor Leader Joo Ho-young insisted that the motion not be put to a vote without consent from the ruling party.

Kim, in response, told the People Power Party and the Democratic Party to hand in their final opinions relating to the motion before the National Assembly resumed its plenary session in the early afternoon.

The ruling party's lawmakers refused to attend the vote, and protested the move as Democratic Party lawmakers entered the main hall to vote on the bill.

Joo continued to insist that the National Assembly should not pass the motion while Foreign Minister Park is carrying out his duties with the vice president of the US, who was visiting Seoul on Thursday. Joo said, “(The National Assembly) should not stab him (Park) in the back, who is on the diplomatic front.“