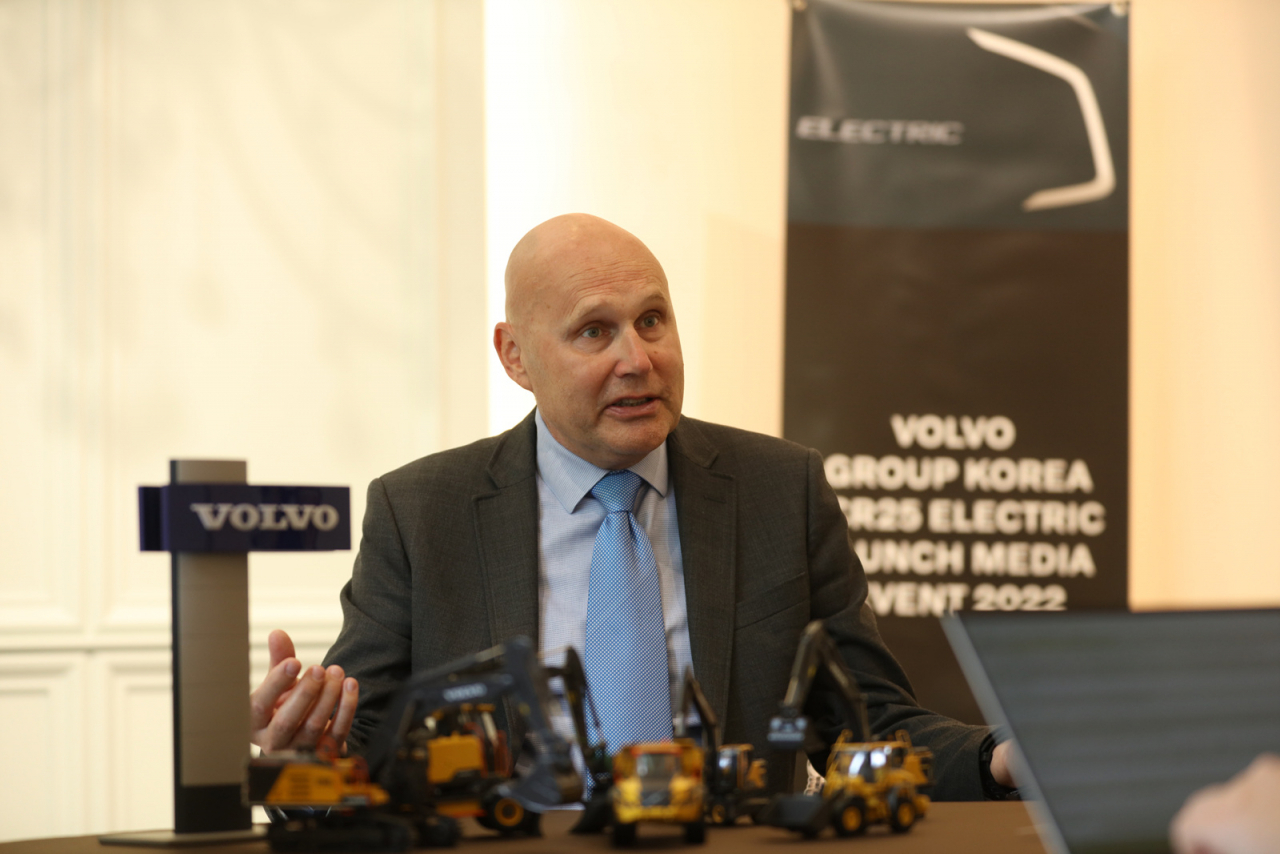 Tomas Kuta, Volvo CE's president of Asian region, speaks during an interview with The Korea Herald in Seoul on Wednesday. (Volvo Group Korea)

Volvo Construction Equipment is betting big on its first full-electric excavator ECR25 Electric to take the lead in the construction equipment industry’s nascent but promising transition toward electromobility, according to its Asian chief on Wednesday.

“The Korean market already has developed telecommunications infrastructure, and rapidly accepted electric private vehicles during the last few years, so the market also seems to have great potential in case the government strongly supports the transition of the market.” Volvo CE President of Region of Asia Tomas Kuta told The Korea Herald as he was visiting Seoul for the Asian debut of the ECR25.

Due to supply chain disruptions and inflation concerns, Volvo Group Korea said, the Korean market is expected to suffer an estimated 15 percent decline in demand. But the company said it is ready to face up these challenges to meet its sustainability goals as the world’s leading manufacturing.

“Volvo CE has ambitious goals of building 100 percent fossil fuel-free product portfolio by 2040, and aims to achieve 35 percent of its sales through electric equipment by 2030. We will continue on considerable investment and support expecting to discover a new electric CE market opportunity in Korea,” explained Kuta.

The ECR25 is a 2.5-ton all-electric compact excavator equipped with a 20 kilowatt-per-hour battery pack that is supplied by South Korean battery maker Samsung SDI. The vehicle can be operated for four hours on a single charge. Using an optional fast charger, it takes only one hour to charge up to 80 percent of the battery.

South Korea is home to Volvo CE’s biggest production plant and one of the four research and development centers. Even though the Changwon plant in South Gyeongsang Province is responsible for more than half the excavator production globally, the latest electric model is being developed and produced at its French factory.

Earlier this year, the company announced plans to develop and build a larger electric excavator, called EC230, at the Changwon plant, with the test-production already underway.

“We recently shipped 35 of these (EC320 excavators) to Norway and we’ve already got very high demand. We will continue to invest and be ready to increase production in Changwon,” Kuta said.

Depending on the market reaction, he added, the company could consider producing the smaller ECR25 in Korea, one of the company’s top five markets.

Kuta took office as the head of Volvo CE’s Asia operations in January 2021. Prior to that, the Czech Republic-born executive used to be in charge of global sales and retail network management and played a key role in increasing the company’s market share globally.