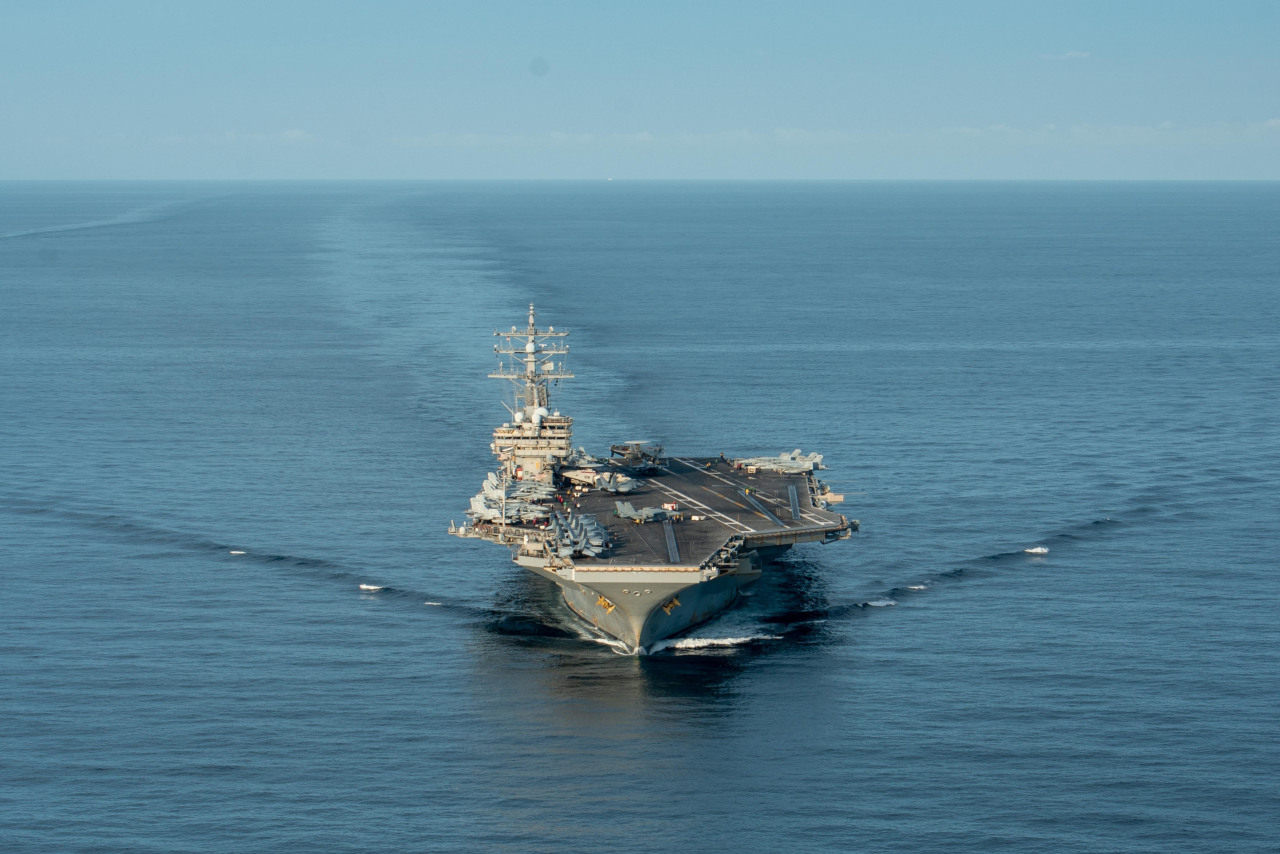 The US Navy’s only forward-deployed aircraft carrier, USS Ronald Reagan (CVN 76), steams in waters east of the Korean peninsula, Sept. 28. The Ronald Reagan Carrier Strike Group (CSG) is participating with the ROK Navy in Maritime Counter Special Operations Exercise (MCSOFEX) to strengthen interoperability and training. (Photo - US Navy)
South Korea, the United States and Japan will conduct an anti-submarine warfare exercise near the Korean Peninsula for the first time in five years to enhance combined capabilities and interoperability against escalating threats from North Korea.

The South Korean and US navies and the Japan Maritime Self-Defense Force are set to stage trilateral drills on Friday in international waters of the East Sea, South Korea and the US announced on Thursday.

South Korea’s Navy underscored that the three countries plan to stage the anti-submarine warfare exercise in light of North Korea’s continuing nuclear and missile threats, including a series of ballistic missile launches.

North Korea launched a total of three short-range ballistic missiles toward the East Sea in two discrete launches, on Sunday and Wednesday, in an apparent tit-for-tat action against the alliance’s move. The South Korean and US navies were to complete its four-day large-scale naval drills, which involve the Ronald Reagan Carrier Strike Group, in the East Sea on Thursday.

The US nuclear-powered fast attack submarine USS Annapolis will also join the naval drills, The Korea Herald has learned. South Korea’s Navy and Japan Maritime Self-Defense Force will respectively dispatch the 4,400-ton Munmu the Great destroyer and the Asahi-class destroyer.

The three navy forces will search, detect and track submarines and exchange information during the anti-submarine warfare exercise in a bid to promote interoperability, tactical and technical coordination and efficient communications in anti-submarine warfare, according to the South Korean and US navies.

“We will continue such realistic high-intensity exercises so that we can react decisively and overwhelmingly against any form of provocations,” Cho was quoted by the US Navy as saying.

The first and last trilateral anti-submarine warfare exercise was conducted in April 2017 in international waters, south of Jeju island.

The Defense Ministry underlined that an anti-submarine warfare exercise is “defensive in nature” and aims to enhance combined readiness against North Korea’s missile and nuclear threats.

“The upcoming exercise is part of the Defense Ministry’s measures to restore military cooperation among South Korea, the US and Japan to a level that they had been before 2017 so as to counter North Korea’s nuclear and missile threats,” it said.

The three countries are pushing ahead with staging an anti-submarine warfare exercise with the goal to “improve capabilities to search, identify and track North Korean submarines which are capable of launching SLBMs.”

South Korea, the US and Japan have “chosen the international waters of the East Sea as the military exercise and training area in light of North Korea’s SLBM threats and expected sea area of major submarine activities,” according to the ministry.

Resumption implications
The resumption of the anti-submarine warfare exercise is in line with the joint move by South Korea, the US and Japan to restore and step up their military and security cooperation against escalating threats by North Korea.

Enhancing trilateral security cooperation is the key of the Biden administration’s Indo-Pacific engagement strategy. The Biden administration set the goal of aligning and coordinating the three countries’ regional strategies and handling North Korean threats and other regional issues through trilateral channels in its Indo-Pacific strategy announced in February this year.

The Yoon Suk-yeol government also sees it as necessary to expand trilateral military drills with the US and Japan in light of North Korea’s mounting threats. But South Korea’s Defense Ministry has said it will push forward the plan gradually with a cautious, case-by-case approach considering anti-Japanese public sentiment.

The Yoon government views that the resumption of trilateral nonmilitary and military exercises, that had been conducted before the Moon Jae-in government came into office, could be a starting point to step up trilateral security cooperation. An anti-submarine warfare exercise is one of the military exercises that had been suspended in the wake of the radar lock-on dispute between Seoul and Tokyo in 2018.