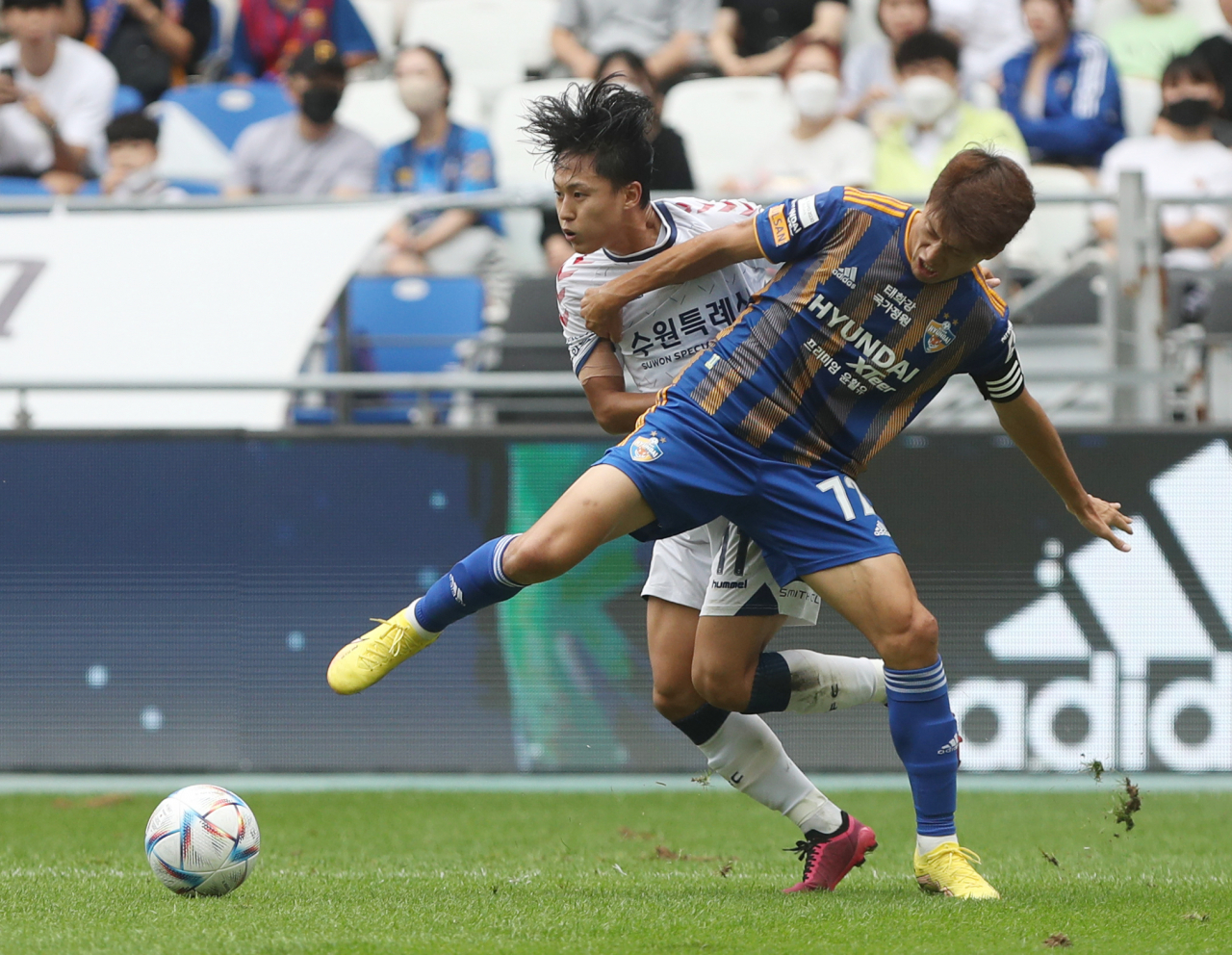 In this file photo from Sept. 18, Lee Chung-yong of Ulsan Hyundai FC (R) and Lee Seung-woo of Suwon FC battle for the ball during the clubs' K League 1 match at Munsu Football Stadium in Ulsan, 380 kilometers southeast of Seoul. (Yonhap)

The final stretch of the 2022 K League 1 football season will kick off this week, with six matches spread over the three-day National Foundation Day weekend.

After 33 matches, the six best teams in the top division were grouped into "Final A," while the rest were dropped into "Final B." They will now play five more games within their own groups to finish out the season.

Ulsan are trying to win their first title since 2005. They came close to ending that drought in each of the past three years, only to have those bids foiled by Jeonbuk in late days of those seasons.

Ulsan had recently enjoyed a double-digit lead over Jeonbuk but the league title now appears up for grabs. Jeonbuk went undefeated in September with three wins and two draws, while outscoring opponents 11-4. Ulsan had two wins, two losses and a draw last month and managed just four goals in that stretch.

And Incheon have given them trouble all season, holding Ulsan to three consecutive draws, including a scoreless affair on Sept. 14. Incheon are the only club that Ulsan have not defeated in 2022.

While Jeonbuk sit five points back of Ulsan, they are also just six points ahead of third-place Pohang. Jeonbuk and Pohang have been in dead heat this year, with each club recording a win, a draw and a loss in three meetings so far.

While the top dogs are chasing the trophy, the league's bottom feeders will look to avoid relegation to the K League 2 next year.

Seongnam and Suwon Samsung will collide for Monday's 2 p.m. matinee. Gimcheon will take on Suwon FC, who missed out on Final A by one point, at 4:30 p.m. Sunday.

The last place K League 1 club will be directly relegated to the K League 2 for 2023. The 11th- and 10th-ranked teams must survive playoffs against K League 2 contestants to stay in the top division next year. (Yonhap)