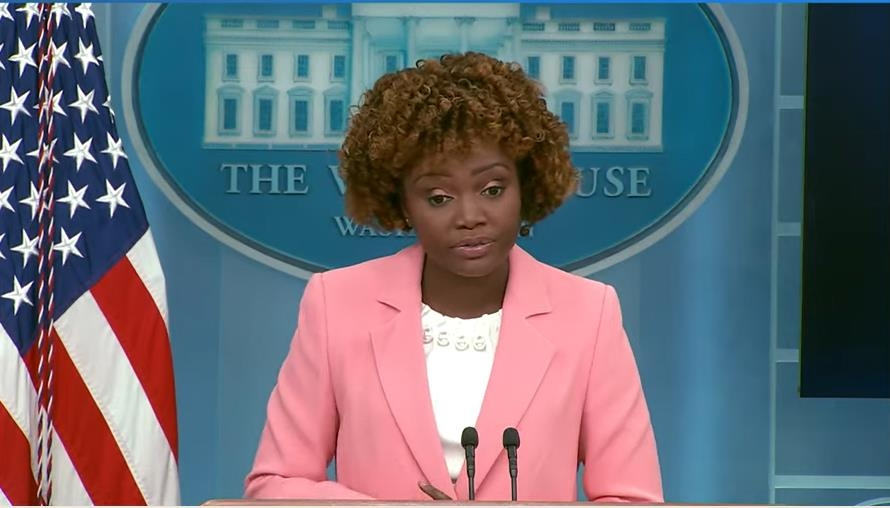 White House Press Secretary Karine Jean-Pierre is seen speaking during a daily press briefing in Washington on Wednesday in this image captured from the website of the White House. (White House website)

"The United States condemns the DPRK's ballistic missile launches," the spokesperson told Yonhap News Agency in an email, referring to North Korea by its official name, the Democratic People's Republic of Korea.

"These launches are in violation of multiple United Nations Security Council Resolutions and poses a threat to the DPRK's neighbors and the international community," the official added, speaking on condition of anonymity.

The department spokesperson urged the North to return to the dialogue table, saying, "We remain committed to a diplomatic approach to the DPRK and call on the DPRK to engage in dialogue."

"Our commitment to the defense of the Republic of Korea and Japan remains ironclad," the official added.

"As we have said many times when we have seen this behavior -- the DPRK's ballistic missile launches -- these launches are in violation of multiple United Nations Security Council resolutions and pose a threat to the DPRK's neighbors and the international community," White House Press Secretary Karine Jean-Pierre said in a press briefing.

The US vice president is currently on a visit to Japan where she attended the funeral of former Japanese Prime Minister Shinzo Abe. She is scheduled to travel to South Korea on Thursday (Seoul time), when she will also visit the Demilitarized Zone (DMZ).

Jean-Pierre said the North's missile launches will not affect the vice president's scheduled trip to the DMZ when asked.

"The vice president will tour sites at the DMZ, meet the service members and receive an operational briefing from US commanders," she told the press briefing.

"The vice president will reflect on the shared sacrifice of tens of thousands of American and Korean soldiers who fought and died together, and will reaffirm the US' commitment to the ROK's defense is ironclad," she added.