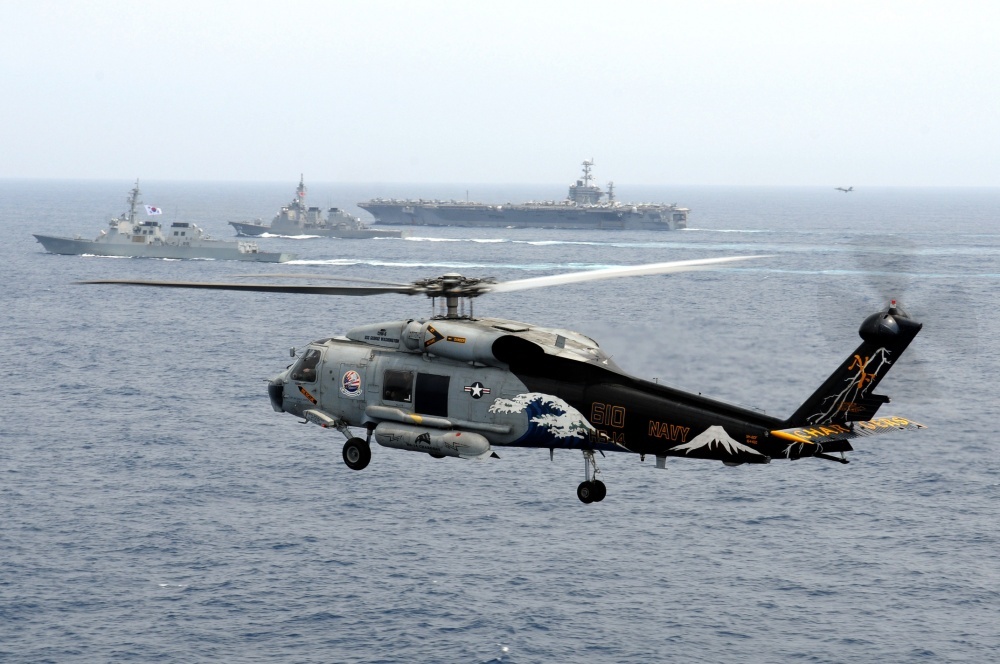 In this file photo, an SH-60F Seahawk helicopter, assigned to the Chargers of Helicopter Anti-Submarine Squadron (HS) 14, is airborne while the aircraft carrier USS George Washington (CVN 73), the Japan Maritime Self-Defense Force destroyer JS Kirishima (DD 174), and the Republic of Korea navy destroyer ROKS Sejong the Great (DDG 991) participate a trilateral event, June 22, 2012. (US Department of Defense)
South Korea, the United States and Japan will conduct a trilateral military exercise in waters off the Korean Peninsula, a South Korean lawmaker revealed Wednesday.

The South Korean, US navies and the Japan Maritime Self-Defense Force are set to stage an anti-submarine warfare exercise on Friday in international waters of the East Sea, Rep. Ahn Gyu-back of the opposition Democratic Party of Korea said on Facebook.

Ahn said the trilateral exercise will be staged outside of the Korean Theater of Operations, or KTO.

But Ahn pointed out that the place where the exercise is expected to be conducted is only 150 kilometers away from South Korea's easternmost Dokdo islets which Japan has claimed as its own territory.

The South Korean Navy has not yet confirmed the upcoming trilateral exercise.

The exercise aims to enhance tactical maritime capabilities and to promote communications, interoperability and partnership in the 7th Fleet area of operations.

In 2017, the exercise consisted of submarine search, fix, and tracking; high-value unit protection and anti-submarine defense maneuver, according to the US Indo-Pacific Command.

The resumption of the anti-submarine warfare exercise is in line with the joint move by South Korea, the US and Japan to restore and step up their security cooperation against growing threats by North Korea.

Seoul sees it as necessary to expand trilateral military drills with Japan and the US in light of North Korea’s mounting threats, but will push forward the plan gradually with a cautious, case-by-case approach.

South Korea's Defense Ministry views that the resumption of trilateral nonmilitary and military exercises, that had been conducted before the Moon Jae-in government came into office, could be a starting point to step up the security cooperation.

Counterterrorism exercises, Search and Rescue Exercises and anti-submarine warfare exercises have been suspended in the wake of the military dispute between Seoul and Tokyo since 2018. At the time, Japan accused a South Korean Navy destroyer of directing its fire-control radar at a Japanese military surveillance aircraft.

The trilateral exercise will also come one day after the four-day bilateral maritime exercises between the South Korean and US navies.

The South Korean and US navies have mobilized more than 20 warships for their military exercises staged in South Korea’s East Sea.

The US Navy’s nuclear-powered aircraft carrier, USS Ronald Reagan, and its carrier strike group, as well as the US nuclear-powered fast attack submarine USS Annapolis, have also joined the bilateral maritime exercises.