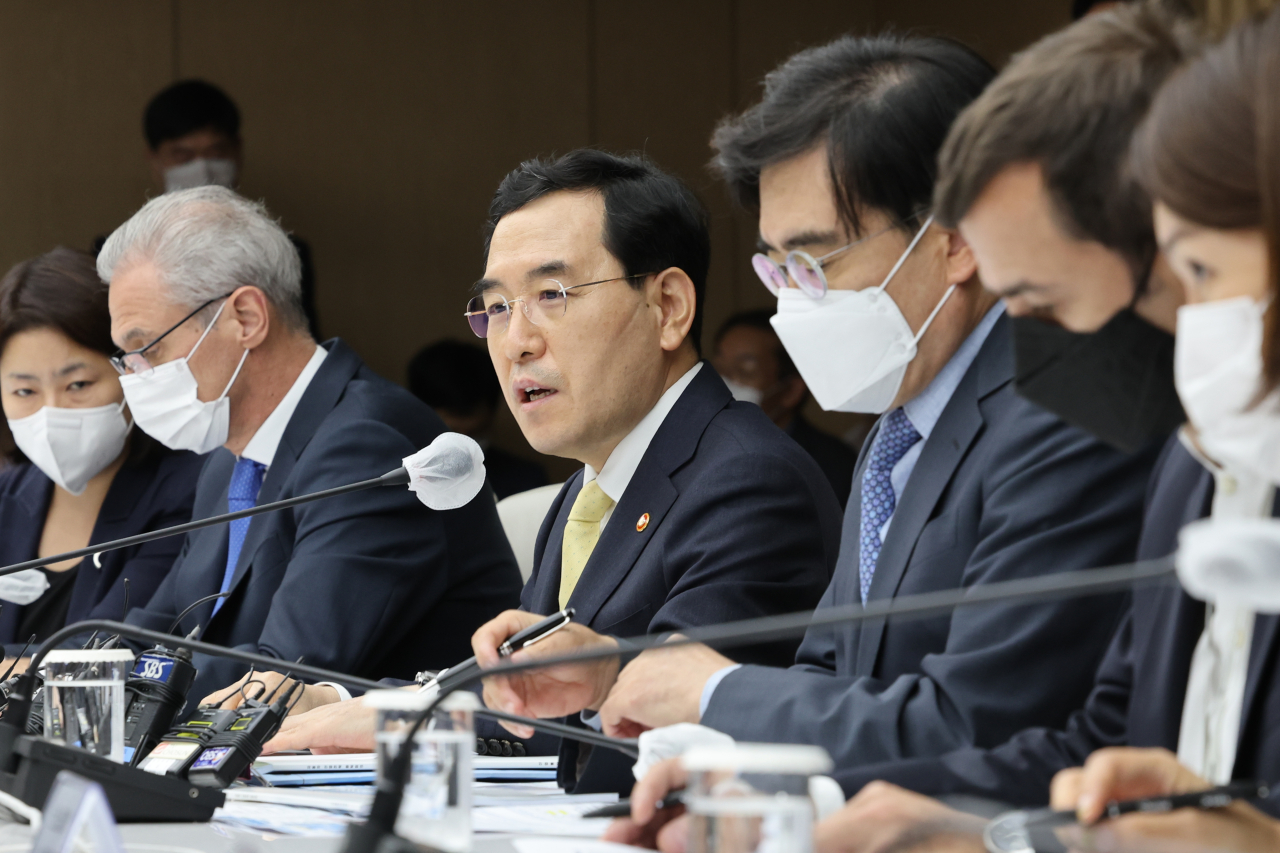 Industry Minister Lee Chang-yang (third from left) speaks during his meeting with chief executives from local carmakers at the Korea Chamber of Commerce and Industry in Seoul, Wednesday. (Yonhap)
SEJONG -- South Korea’s policymakers on Wednesday unveiled their goal of taking up 12 percent of the global auto market and expanding the country's capacity in manufacturing electric vehicles with 3.3 million units a year, expressing its confidence in tackling concerns over US' inflation reduction bill.

Setting a target of becoming the world's third-largest automaker, the government will “resolve regulatory barriers” and “offer tax benefits" to help local carmakers smoothly carry out investment projects worth 95 trillion won ($66 billion) between 2022 and 2026, the Ministry of Trade Industry and Energy said in a statement.

“The local industry has been facing difficulties, including the US Inflation Reduction Act. It is time for the private sector and government to collaborate,” said Industry Minister Lee Chang-yang, adding that strategies suggest directions where Korean carmakers are headed.

The plan was addressed at a meeting attended by the minister and chief executives from carmakers, including Hyundai Motor, Kia Motors, GM Korea and Renault Korea, in Seoul.

The key plan is to expand Korea's manufacturing capacity in EVs.

In 2021, the local automobile industry produced 254,000 EVs, taking only 5 percent in the global market of the green cars.

Other plans include fostering 30,000 engineers specialized in next-generation automobile technologies which would bolster the country's competitiveness in vehicle software.

The government plans to expand the global market share in chips for vehicles from 3.3 percent in 2021 to 6.6 percent in 2030 by developing 16 core items such as processors, sensors and power semiconductors.

Fuel efficiency of hydrogen-powered vehicles will also be raised from 13 kilometers per kilogram in 2021 to 17 kilometers in 2030.

Autonomous cars are set to start commercial operation from 2027 by pushing up carmakers' competitiveness level on par with developed countries.