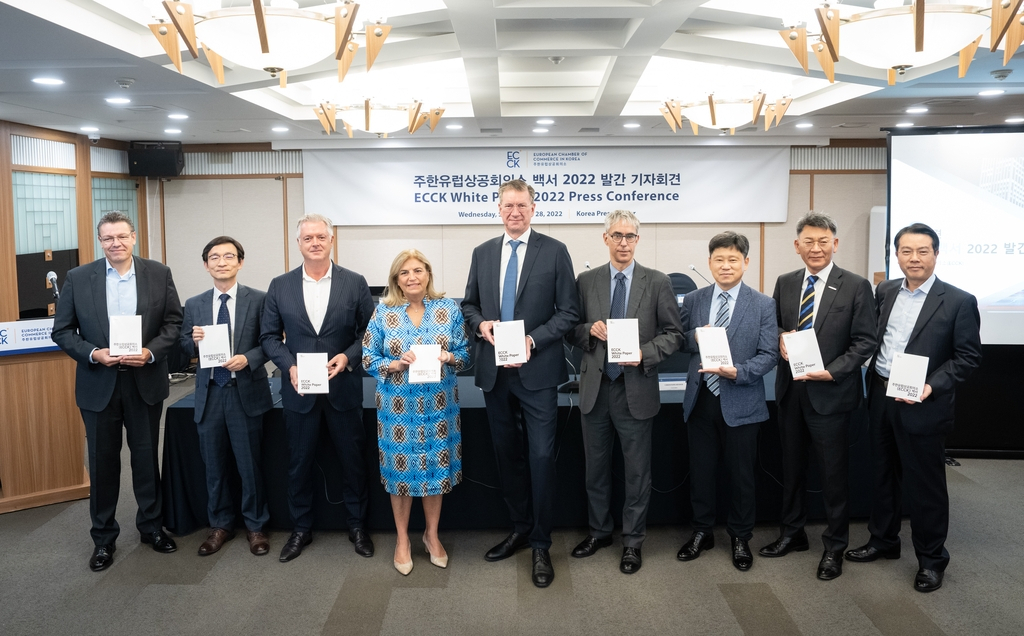 European Chamber of Commerce in Korea (ECCK) Chairperson Dirk Lukat (5th from L), Maria Castillo-Fernandez (4th from L), ambassador of the European Union to the Republic of Korea, and other ECCK representatives hold up the 2022 white paper in their hands as they pose for a photo at a press conference on the annual publication in Seoul on Wednesday. (Yonhap)

The European Chamber of Commerce in Korea (ECCK) on Wednesday called for South Korea to consider revising regulations on electric vehicles and several other key sectors to provide more procedural clarity and flexibility in line with international standards.

The ECCK made the recommendations to the South Korean government in its latest annual white paper for this year, which contains a total of 96 comments on the regulatory issues across 18 industries, including automotive, energy and environment, chemicals, food and others.

The recommendations were made based on the conclusion of the discussions among the 21 ECCK committees that represent the industries by sector.

Its automotive committees proposed the government announce its supply target of EVs and other eco-friendly vehicles to Korea in advance, at least two years before the implementation, to ensure a stable supply of green cars.

They called for the EV certification procedures to be amended in a way that fits the specific needs of EVs, as the current procedures remain based on internal combustion engine cars.

The white paper noted the need to ease rules on the width of commercial vehicles from the current limit of 2.5 meters, as opposed to the 2.55 meters in Europe, since it remains an obstacle to expediting the introduction of eco-friendly vehicles, such as electric trucks and buses, into Korea.

"The intention of our recommendations is to improve the overall efficiency and effectiveness of the market," ECCK President Christoph Heider said at a press conference.

"I hope that we will see the Korean administration take a greater leadership role in the implementation of international standards, or full adherence to them, something which is of key importance to all our member companies," he said.

For the energy sector, the ECCK addressed offshore wind power as one of the most promising renewable energy sources due to Korea's geographical characteristics, suggesting more clear guidelines and unified licensing processes be established to boost the sector.

Flexibility in new substance registration standards for chemical manufacturing imports, and the need for more sufficient time for grace periods or gathering industries' comments prior to any law amendments were also included in the recommendations.

The ECCK also called for an easing of retail licensing rules for food importers and e-commerce regulations for liquor vendors.

According to the ECCK, the total amount of trade between South Korea and the economic bloc grew notably in the past decade, from 61 billion euros (US$58.5 billion) in 2010 to 107 billion euros in 2021.

The ECCK was established in 2012 as an advocacy group for promoting trade and business relationships between Europe and South Korea. As of 2021, the ECCK had 370 member companies and represented about 50,000 employees working in Korea. (Yonhap)