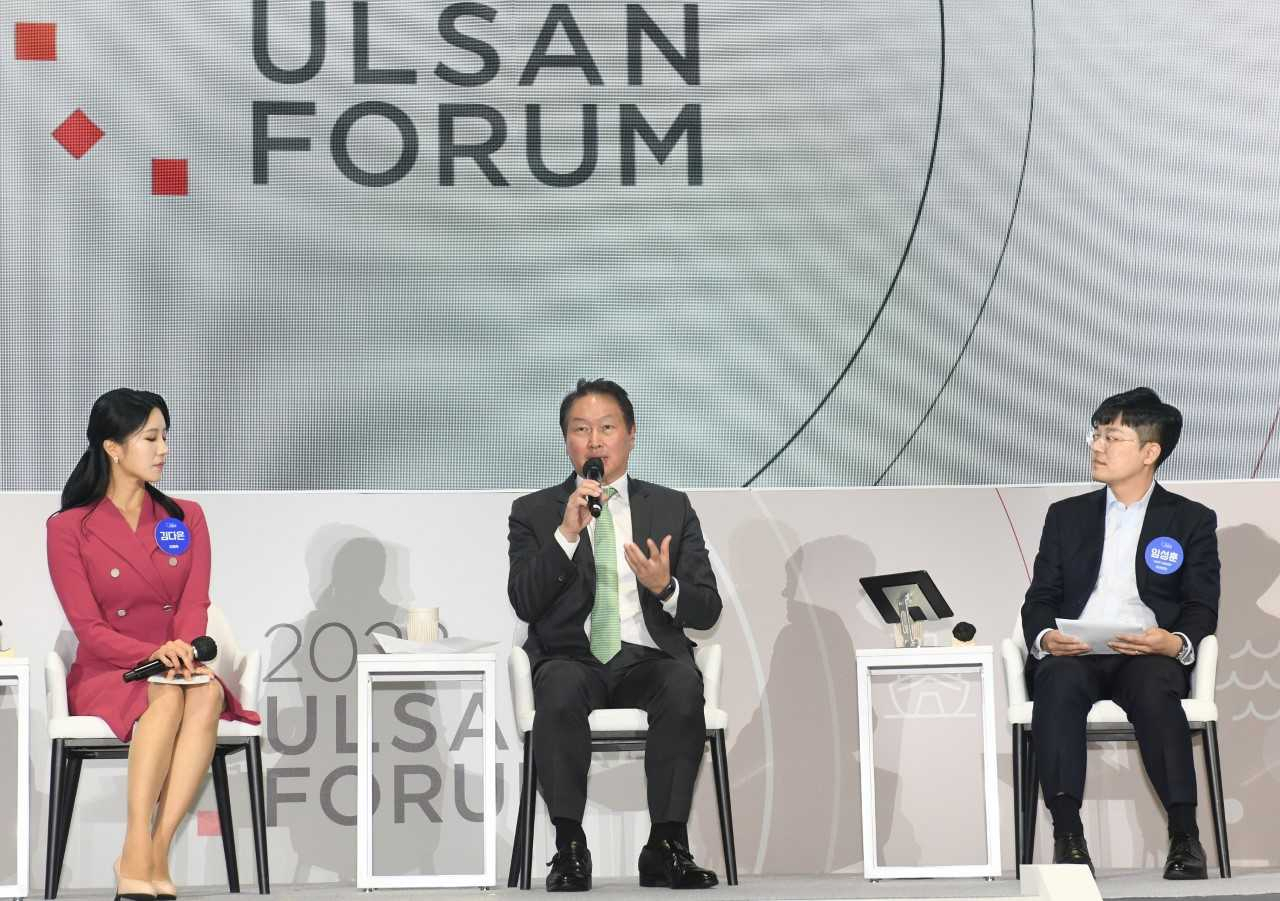 SK Group Chairman Chey Tae-won (center) talks during the Ulsan Forum held in the southeastern city of Ulsan on Monday.

SK Group on Monday launched the Ulsan Forum, a regional communication channel where SK companies, experts, academics and the local community talk about the future growth direction of the city and the provincial economy.

The launch comes as SK Innovation marked the 60th anniversary of its Ulsan CLX, the nation’s first oil refinery built in the industrial city, some 300 kilometers southeast of Seoul, back in 1962.

Succeeding the annual Icheon Forum launched in 2017 in Icheon, Gyeonggi Province, home to SK hynix, the Ulsan Forum aims to better communicate with the local community, which is considered crucial for SK’s sustainable growth, officials said.

“While the Icheon Forum marked the beginning of a grand transition at SK, the Ulsan Forum will pave the way to find solutions for the transition,” SK Group Chairman Chey Tae-won said during the forum.

Instead of delivering a closing message, Chey received questions from the audience during the day.

Asked about the future direction of the city’s manufacturing industry in an era of carbon neutrality, he stressed three aspects of the issue – time constraints, costs and opportunities.

“Emissions reduction goals have already been set in accordance with time frames like the 2030 and 2050 targets. And as times goes by, the costs are also growing rapidly, possibly to exceed $1 million per ton soon,” he said.

“But if we come up with solutions as a ‘first mover,’ we can apply the measures to other countries and create new business opportunities.”

Regarding the growing gap between metropolitan and other provincial areas, he said “First of all, we should decide what to earn and what to give up. There should be a program that works on a new social consensus.”

“For SK Group’s sustainable growth, it is crucial to earn trust from all stake-holder groups, including the local community,” said an SK official. “We will continue to nurture ways to prepare for the future of Ulsan based on discussions during the Ulsan Forum.”