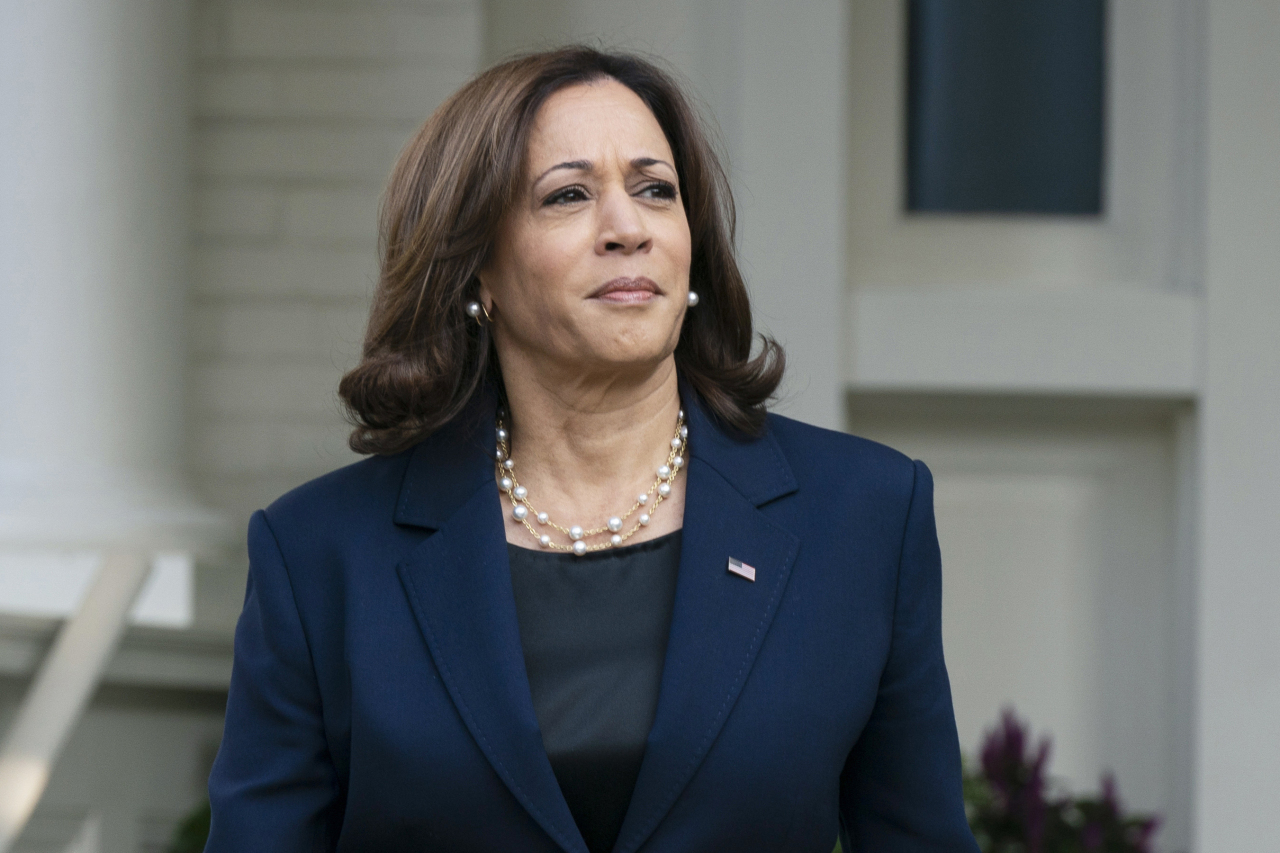 US Vice President Kamala Harris waits outside the Vice President's official residence Sept. 16, 2022, in Washington. Harris is leading a US delegation to Tokyo for the funeral of former Japanese prime minister Shinzo Abe, who was assassinated in July. (AP-Yonhap)
A number of top-level discussions on alliance, security and the economy are expected to take place this week, as top officials, including US Vice President Kamala Harris, are set to visit Seoul. The meetings will be follow-ups to the talks South Korean President Yoon Suk-yeol had with world leaders during his seven-day trip to Britain, the US and Canada last week.

Seoul’s Ministry of Foreign Affairs confirmed Monday that Prime Minister Han Duk-soo will be traveling to Japan on Tuesday to lead the country’s delegation to attend a state funeral for former Japanese Prime Minister Shinzo Abe.

There, Han will hold a bilateral meeting with Japanese Prime Minister Fumio Kishida, and is expected to discuss pending issues, including Korea’s top court’s rulings on Japan’s wartime forced labor that has become the major sticking point between the two countries.

Han’s meeting with Kishida comes after South Korean President Yoon Suk-yeol held his first in-person meeting with his Japanese counterpart on Wednesday, on the sidelines of the UN General Assembly in New York.

In Tokyo, Han will also hold a meeting with the US vice president who is also attending Abe’s state funeral on Tuesday.

After her trip in Tokyo, Harris will head to Seoul on Thursday to meet with President Yoon, according to the White House. In their first face-to-face meeting, Yoon and Harris are expected to discuss on their alliance, and address the escalating nuclear threats by North Korea.

Pyongyang launched a short-range ballistic missile on Sunday in an apparent protest of the arrival of the US Navy's nuclear-powered aircraft carrier, USS Ronald Reagan, last week.

The US carrier strike group entered the Korean naval base in Busan for first time in five years for a four-day combined maritime exercise, which kicked off on Monday.

The White House said Harris will also discuss on the importance of peace and stability across the Taiwan Strait, and also share their views on their economic and technology partnership.

Amid widespread concerns on US’ Inflation Reduction Act, which hit against Korean electric vehicle makers, the allies will also discuss ways to minimize the impact of the new law that was signed in August.

The IRA, which provides tax credits only to those who buy EVs produced in North America, immediately stripped up away the benefits for Korean EV makers, such as Hyundai Motor and Kia, that manufacture their flagship models in Korea.

During her visit to Seoul, Harris will also be holding a roundtable discussion called “Groundbreaking Korean Women,” to address gender equity issues with prominent women from different industries here, the White House said.

In Seoul, Cleverly will meet with the Korean president, who recently traveled to London to attend the state funeral of Britain’s Queen Elizabeth II. Cleverly will also hold a bilateral talk with South Korean Foreign Minister Park Jin on Wednesday, and visit the Demilitarized Zone that separates the two Koreas.