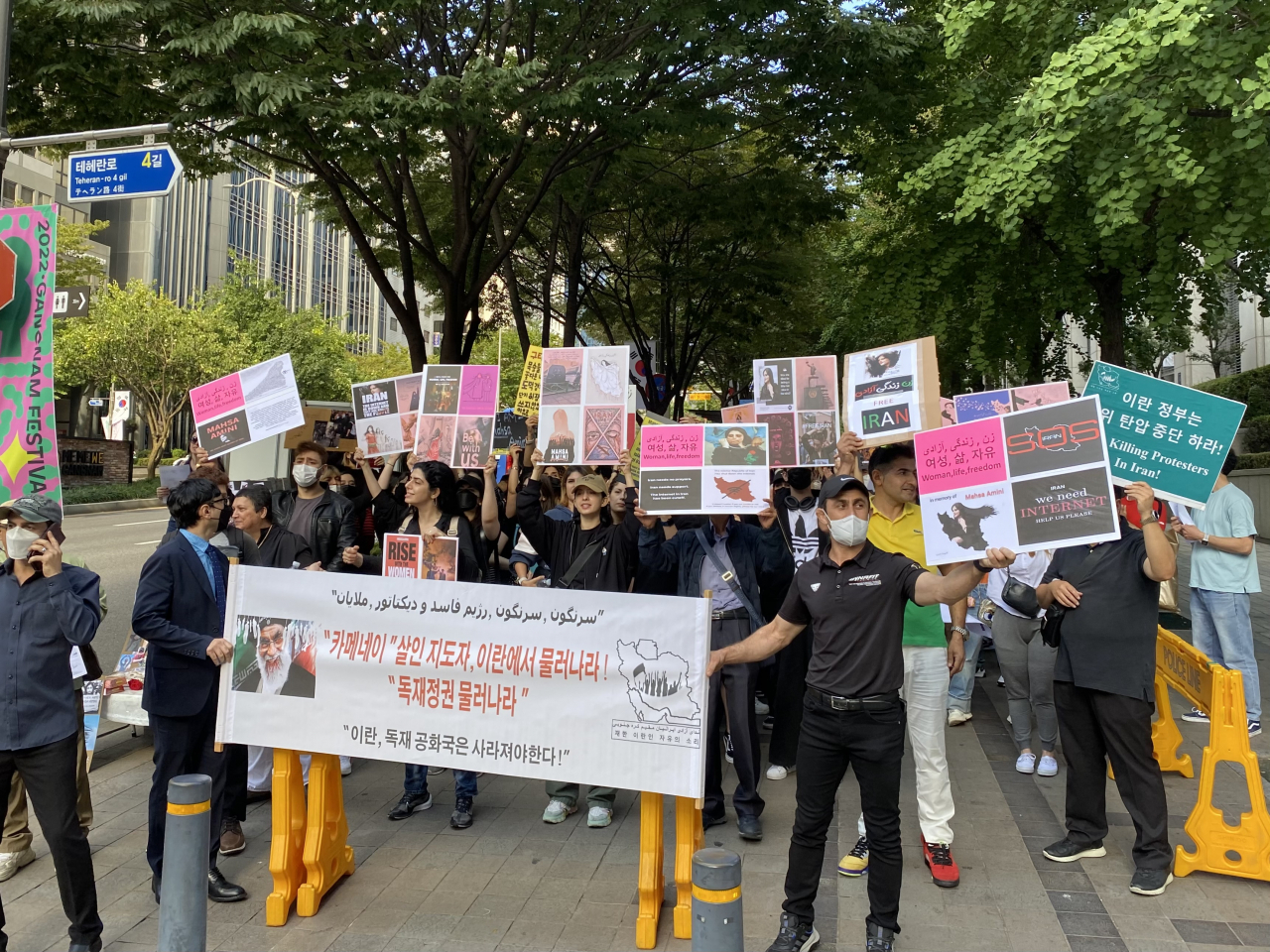 Some 150 Iranians and Koreans took to the streets on Sunday, in solidarity with the widespread protests in Iran sparked by the death of a young Kurdish woman while in Iranian police custody.

The protesters gathered at Teheran Street in southern Seoul, a road that was named after the Iranian capital to celebrate the two countries’ friendship.

Participants chanted the name of Mahsa Amini, the 22-year-old Kurdish woman who died in the custody of Iran's "morality police" for allegedly violating regulations regarding wearing a hijab. Her death has sparked protests in more than 80 cities across Iran, reportedly resulting in dozens of deaths, as well as in other countries. 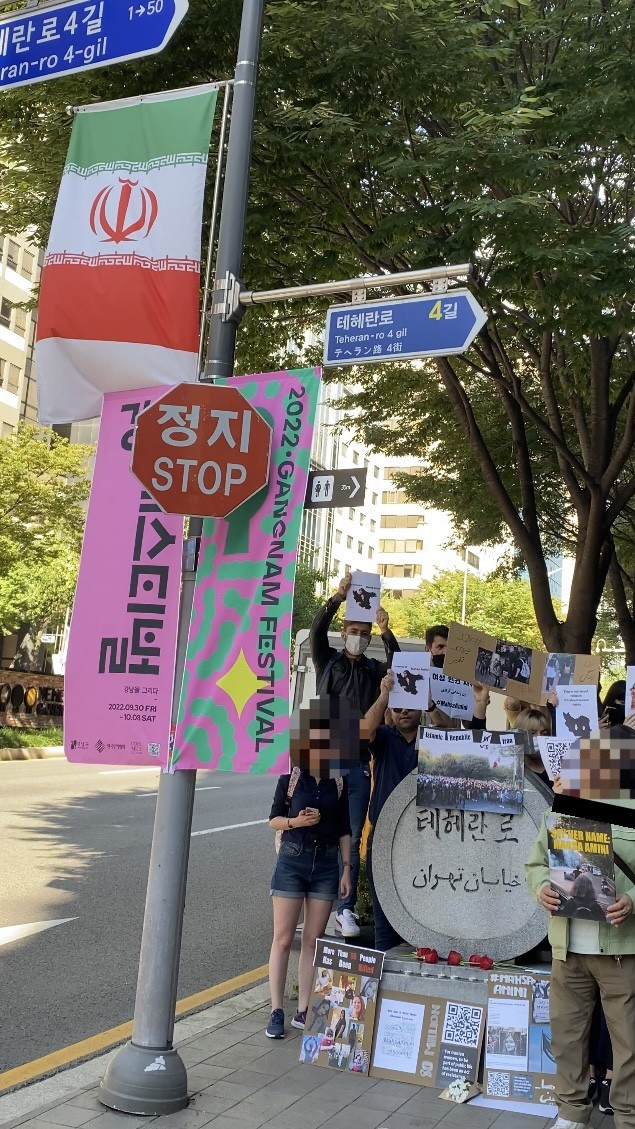 Iranian flag is hung by the side of the demonstrators on Sunday. (Lim Jae-seong/The Korea Herald)

The crowd shouted phrases like “women, rights and freedom” and “for our freedom” in Persian, Korean and English. Some also criticized Iran’s political and religious authorities.

“We want an Iran where people of all religions can live freely, just like before the Islamic Revolution (of Iran in 1979),” said Nikoo Mahadiyeh, a 37-year-old woman who led some of the chants.

“Iran can also be like South Korea and other countries, such as Indonesia, where many people believe in Islam. But why should people be detained or die by the morality police?” she said, angered by her home country’s recent internet blackout after the protests spread across Iran.

“Protests against the hijab obligation has lasted in Iran. There has been a ceremony called ‘White Wednesday,’ where Iranian women held their hijabs high in the public without wearing them,” said Sima Park, an Iranian-born pastor who naturalized in South Korea about 30 years ago.

“Men, not only women, are participating in the protest,” said Park and pointed to a man in the crowd, adding his friends also died during the protest in Iran. “It is the issue that is directly linked to all of us in this rally.”

During the event, Korean passersby encouraged the demonstrators, waving their hands or giving applause. 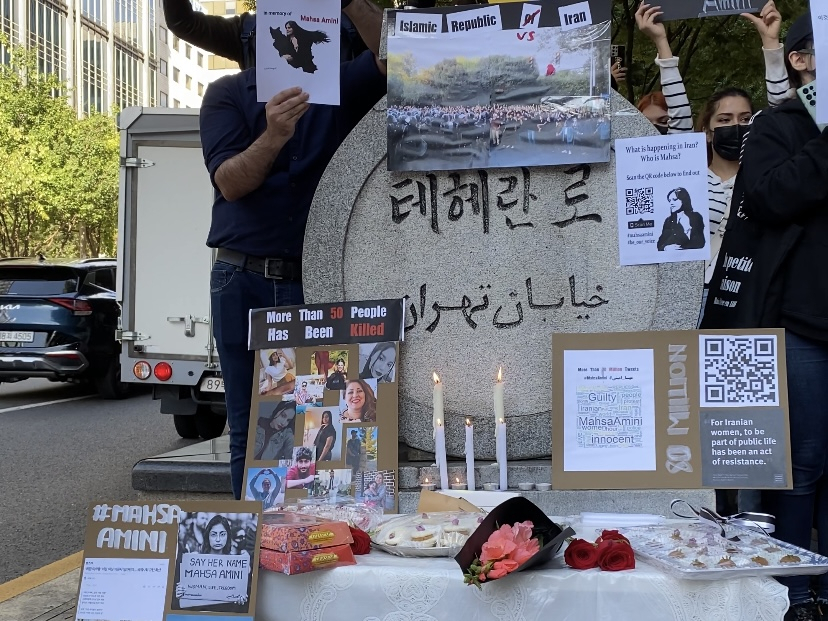 Pictures, flowers, and snacks are laid on the stone which indicates the name of the boulevard Teheran-ro (Lim Jae-seong/The Korea Herald)

Photos of protests taking place in Iran and those who died in the protests, along with Iranian snacks and flowers were arranged on the stone where the name of the street is written in Korean and Persian.

There were also Koreans among the participants.

“This is reminiscent of South Korea in the 1980s, especially after the 1980 Gwangju Uprising massacre happened,” said Kim Jung-mi, a 60-year-old Korean woman taking part in the protest.

She said that she was a college student while Korea was going through democratization, and that she held a one-person protest for human rights issues in Palestine several years ago.

“We want the South Korean government to complain about this issue to the Iranian government as other governments, celebrities and media do so,” Park added.