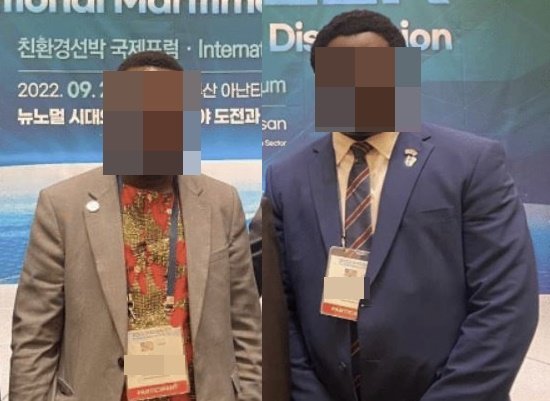 The Liberian government also has reportedly promised to cooperate with South Korea, which is investigating the two officials, according to the Liberian Daily Observer.

The report identified one of the two men as Liberia’s representative to the International Maritime Organization and the other as a high-ranking official at the Department of Marine Environmental Protection at the Liberia Maritime Authority. A picture that includes their faces was also included in the report.

The report quoted the Liberia Maritime Authority saying that it “will fully cooperate with the government of (South Korea) in the investigation of this incident and vows to take appropriate actions, under national and international law."

The Liberia Maritime Authority was also quoted in the report as saying it “unequivocally maintains a zero-tolerance stance on any type of sexual and gender-based offenses, and views these allegations of the conduct of its officials as most egregious, having no place in any civilized society.”

Currently, the two Liberian government officials are confined at a local police station in Busan.

The men had allegedly taken the two underage girls to a local hotel in Dong-gu, Busan, raped and detained them. The men were arrested at around 11 p.m. on Sept. 22 after a friend of the alleged victims reported the incident to the police.

The two officials from the Liberian government had reportedly claimed diplomatic immunity.

However, the police went ahead with requesting an official arrest warrant, saying that their case cannot be covered by diplomatic immunity as codified in the Vienna Convention on Diplomatic Relations.

The South Korean Ministry of Foreign Affairs is also looking into whether the two Liberians were entitled to diplomatic immunity, a ministry official said.