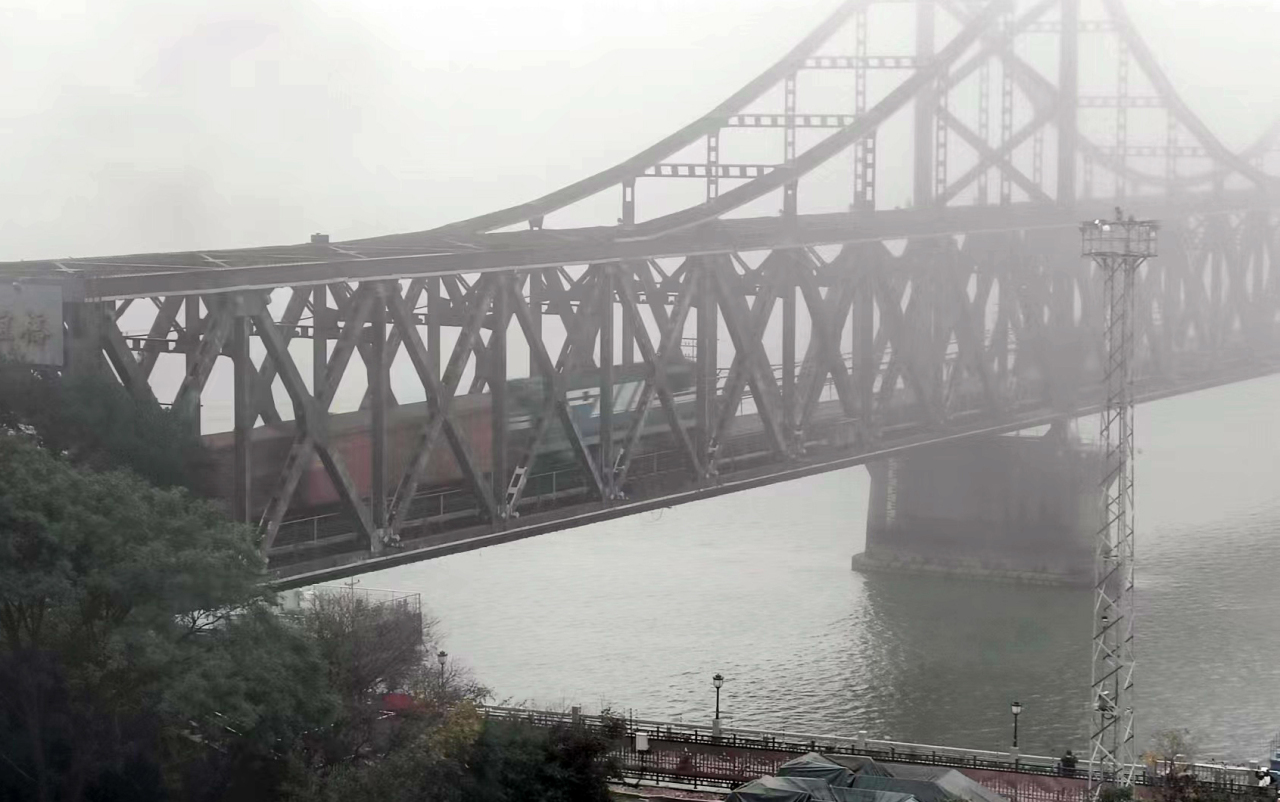 A freight train crosses the Sino-Korean Friendship Bridge, which links China`s Dandong and North Korea`s Sinuiju, from Dandong, China, on Sept. 26, 2022, following the suspension of freight train services between the two neighboring countries on April 29 due to the coronavirus pandemic. (Yonhap)
Cross-border cargo trains between North Korea and China have resumed operations after a five-month hiatus, China’s Foreign Ministry confirmed Monday.

The confirmation came after South Korea’s Yonhap News Agency reported that a freight train loaded with supplies was seen departing from the Chinese border city of Dandong and crossing the China-North Korea Friendship Bridge into Sinuiju in North Korea on Monday morning.

Wang Wenbin, a spokesman at the Chinese Foreign Ministry, said China and North Korea have reached an agreement on resuming freight train services during a regular press conference.

Wang said both sides will continue to step up coordination and ensure the safe and stable operation of freight transportation through trains.

South Korea’s Unification Ministry earlier in the day said that cargo service operations have resumed “based on the outcome of the agreement between North Korea and China.”

The resumption of freight train operations between North Korea and China is related to North Korea’s claimed victory over COVID-19, the ministry explained.

“The possibility of resuming train services between North Korea and China has been raised since the announcement on the shift from the maximum emergency anti-epidemic system to an intensified and reinforced normal anti-epidemic system,” Unification Ministry’s spokesperson Cho Joong-hoon told a televised regular briefing.

Yonhap reported that cross-border cargo trains will operate once or twice per day, citing an unnamed source in China. The source said freight train operations have been back to normal with the COVID-19 situation in Dandong and North Korea having stabilized.

Mondays resumption marked the first time in around five months, after China suspended cross-border train operations on April 29 due to widespread COVID-19 infections in the border city of Dandong followed by citywide lockdown measures. North Korea also officially acknowledged its first COVID-19 outbreak and imposed a nationwide lockdown in May.

The halt of train services came after freight trains between China and North Korea had been temporarily running for three months since this January. Before then, cross-border freight train operations had been suspended for a year and four months since August 2020, in the aftermath of North Korea’s draconian strict border lockdown.

Dandong is a key point of trade between China and North Korea. Around 90 percent of North Korea’s trade is conducted with China, and 70 percent of the trade went through Dandong prior to the pandemic. North Korea has largely relied on maritime transport in the wake of the COVID-19 pandemic.