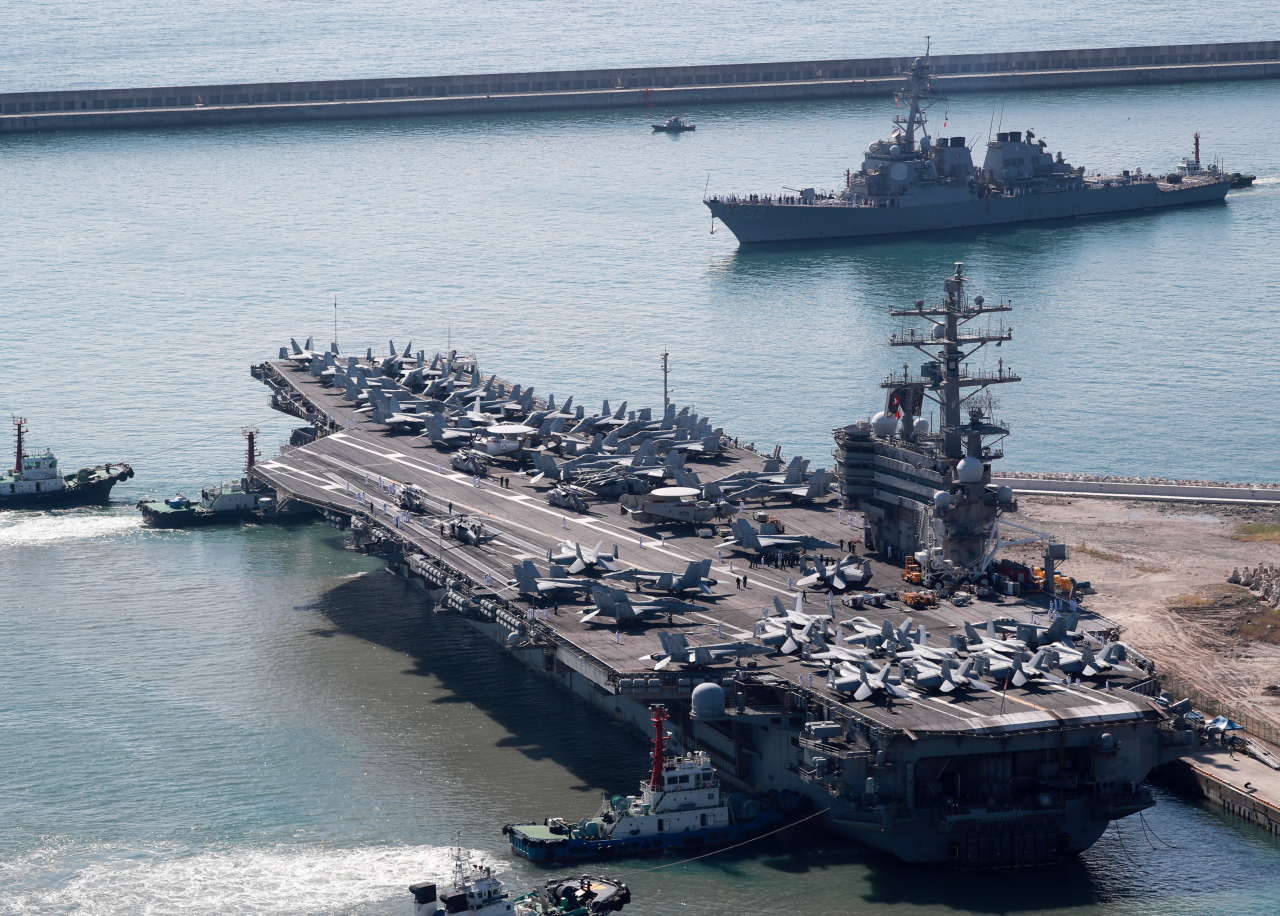 The US nuclear-powered aircraft carrier Ronald Reagan arrives at a naval base in Busan, southeastern South Korea, on Sept. 23, 2022, for its first combined drills with the South Korean Navy near the peninsula in five years, as the allies are striving to reinforce deterrence against evolving North Korean military threats. (Yonhap)
BUSAN – The US Navy’s nuclear-powered aircraft carrier USS Ronald Reagan arrived in South Korea on Friday morning as South Korea and the United States seek to improve the allies’ combat readiness and deterrence against mounting threats from North Korea and regional security challenges.

With a total of around 4,900 crew members and 90 aircraft, the USS Ronald Reagan, a 100,000-metric ton nuclear-powered supercarrier, and its carrier strike group docked at a naval base in the southern city of Busan at 9 a.m.

The visit comes amid growing concerns over North Korea’s relentless pursuit to develop missile and nuclear capabilities and marks the first time in five years that a US carrier strike group has entered the naval base for bilateral maritime exercises.

Commitment to face any challenge, threat
Rear Adm. Michael Donnelly, commander of the carrier strike group, on Friday underscored that the port visit of the USS Ronald Reagan is a “clear and visible presence and commitment” of the United States to the alliance.

“The presence and operations of the Ronald Reagan carrier strike group in and around the peninsula and Korea are essential to our interoperability with the ROK Navy and with the Combined Forces Command,” Rear Adm. Donnelly said during a news conference held at the flight deck of the USS Ronald Reagan docked at Busan Naval Base.

“What the commitment of the US carrier strike group operating in and around the peninsula illustrates is our commitment to stand together and our desire and our focus on ensuring that we are interoperable and integrated to face any challenge or any threat whenever we are required.”

But Donnelly elucidated that the visit is part of “ongoing and numerous combined operations” that the US and South Korean Navy conduct throughout the region and around the peninsula when asked if the US intends to send any message to North Korea through the deployment of the USS Ronald Reagan.

“We leave the messaging to diplomats,” he said. “Our interactions with the ROK Navy are tactically purposeful in developing interoperability to ensure credible combat power. And it’s an opportunity for us to practice our tactics and operations and demonstrate that we stand together.”

The USS Ronald Reagan Carrier Strike Group will conduct combined maritime exercises in the East Sea. The Korea Herald learned that the US nuclear-powered fast attack submarine USS Annapolis will join the bilateral maritime exercises which will be staged later this month.

The bilateral maritime exercises aim to “enhance preparedness for every scenario that could arise at sea to defend the Republic of Korea and the joint combat readiness of South Korean and US forces,” Kim told reporters in Busan. 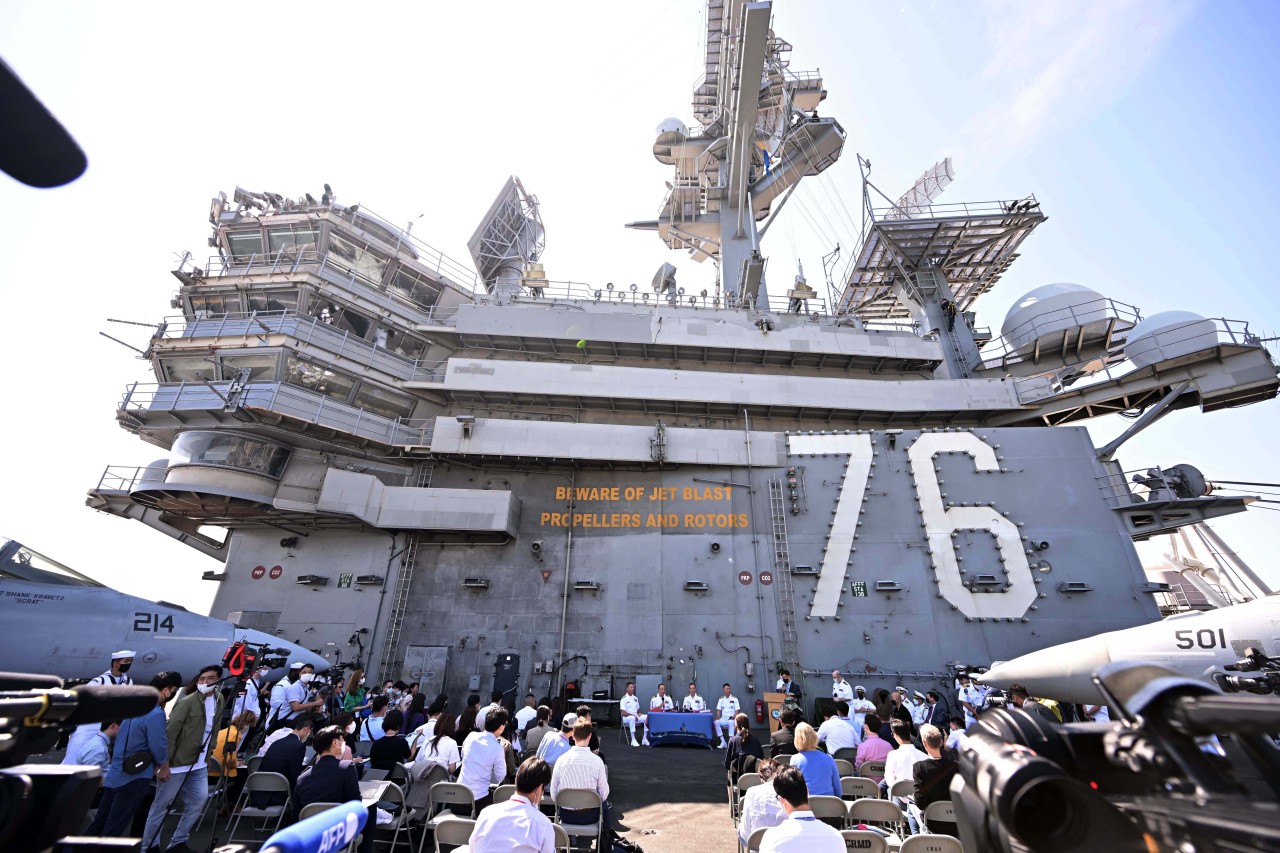 South Korean and US naval commanders hold a news conference at the naval operations headquarters in Busan, southeastern South Korea, on Sept. 23, 2022, on the USS aircraft carrier Ronald Reagan's entry into a naval base in the South Korean port city earlier in the day, From left are US Naval Forces Korea Rear Adm. Mark Schafer, the Ronald Reagan's Captain Fred Goldhammer and Commander Rear Adm. Michael Donnelly and South Korea's Rear Adm. Kim Kyung-cheol. The nuclear-powered aircraft carrier entered the country for its first combined drills with the South Korean Navy in five years. (Yonhap)
Effective, timely deployment
South Korea and Washington view the timely and effective deployment of the US strategic assets as a key means to strengthen the alliance’s deterrence and readiness against North Korea. A nuclear-powered aircraft carrier and submarine and a nuclear-capable bomber are among the US strategic assets.

The deployment of the USS Ronald Reagan came after South Korean President Yoon Suk-yeol and US President Joe Biden “reaffirmed the US’ commitment to deploying strategic US military assets in a timely and coordinated manner as necessary” at the May 21 summit. Both sides also committed to “enhance such measures and identify new or additional steps to reinforce deterrence in the face of DPRK destabilizing activities.”

Seoul and Washington notably agreed to strengthen coordination to continue to deploy and exercise the US strategic assets in the region “in a timely and effective manner” to counter and deter North Korea and enhance regional security at the meeting of the high-level Extended Deterrence Strategy and Consultation Group.

The two countries highlighted the deployment of the Ronald Reagan Carrier Strike Group on the Korean Peninsula as a “clear demonstration of such US commitment” in the joint statement on the outcome of the EDSCG meeting. 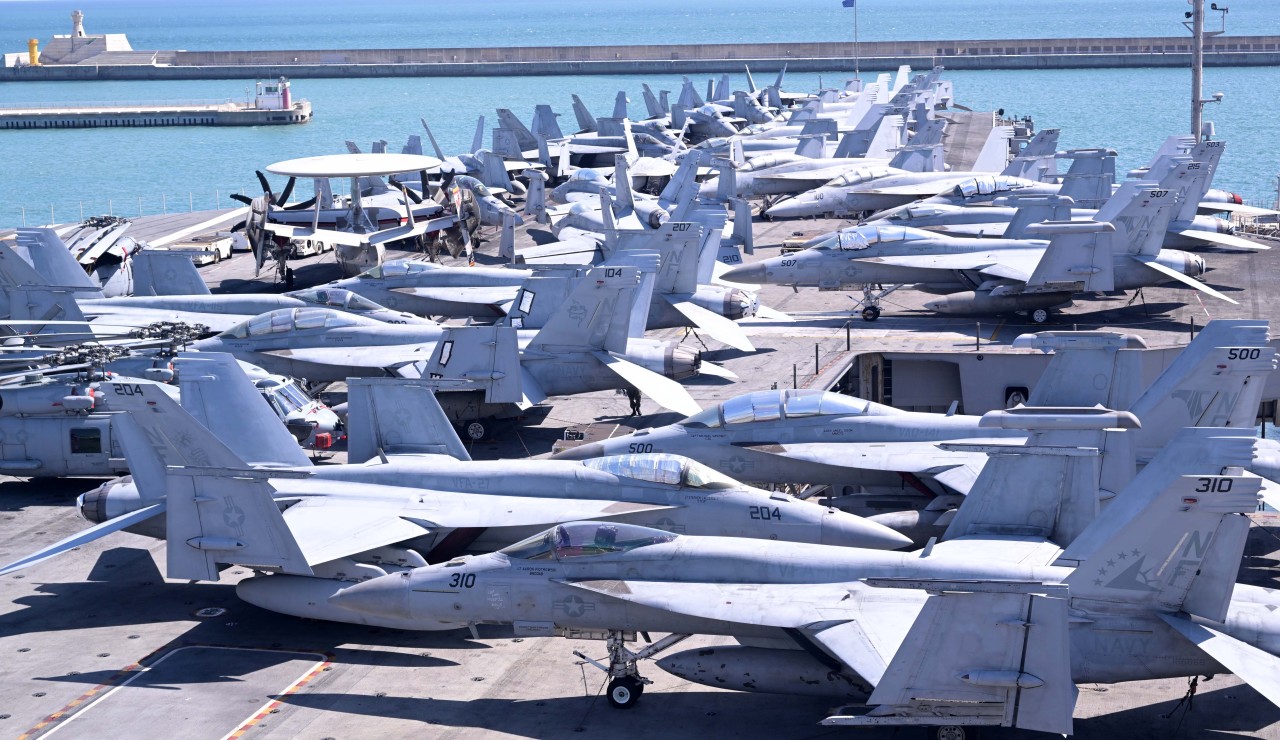 This photo taken Sept. 23, 2022, shows aircraft, including EA-18 G Growler and F/A-18 Super Hornet fighter jets, on the deck of the USS aircraft carrier Ronald Reagan in Busan, southeastern South Korea. The nuclear-powered aircraft carrier entered a naval base in the South Korean port city earlier in the day for its first combined drills with the South Korean Navy in five years.(Yonhap)
Peace through strength
The USS Ronald Reagan has been forward deployed to Yokoshuka in Japan, which is the US 7th Fleet area of operations in support of a free and open Indo-Pacific region since 2015.

Rear Adm. Donnelly also underscored the importance of the strong partnership between South Korea and the US in maintaining the security and stability in the Indo-Pacific region, when asked about how the allies can coordinate in the event of a Taiwan contingency

“What I can tell you is that the ROK Navy and the US Navy seek every opportunity to practice interoperability and to exercise our common tactics and operations where we operate anywhere throughout the Pacific,” Donnelly said.

“As common Pacific nations with a long history both in the alliance and as well as operating together, we share common security interests and we look to stand by each other wherever and whenever required and when those security interests are challenged.”

The mission of the Ronald Reagan supercarrier is to provide a “highly-visible deterrence to potential aggressors” during peacetime whereas its mission changes to launch air attacks on enemies and protect friendly forces,” according to the US 7th Fleet.

The USS Ronald Reagan has a flight deck that covers 4.5 acres or 1.8 hectares which is larger than three football fields and is capable of carrying around 90 aircraft.

The USS Ronald Reagan is named after the 40th US president and takes the motto, “Peace Through Strength.”