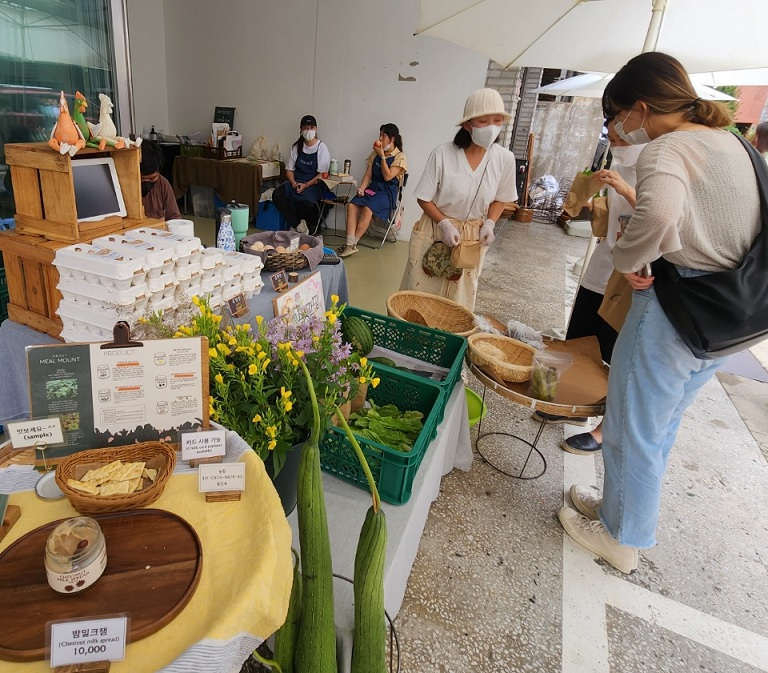 Green vegetables and other agricultural products are on display at a farmers' market hosted by Marche@ in Seoul's Seongsu-dong on Sept. 18. (Choi Jae-hee / The Korea Herald)

A farmers’ market popped up at a corner of a street in Seoul’s Seongsu-dong neighborhood on Sunday.

Among the vendors at the touring market dubbed Marche@ were Lee Ji-sun, 42, who brought herbs, vegetables, and eggs from her family’s farm in Gapyeong, Gyeonggi Province. “Our farm does not use any synthetic chemicals and we hatch chicken eggs naturally,” she said proudly. 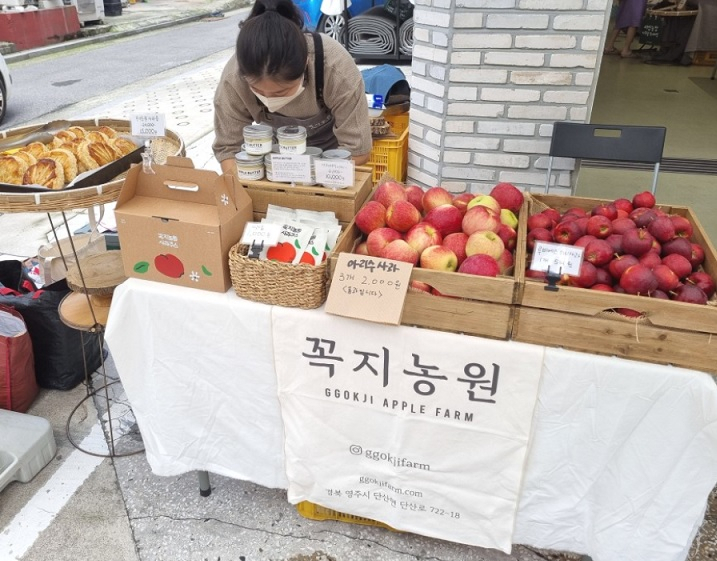 Marche@ is not an ordinary farmers’ market.

Started by a group of city farmers committed to producing organic and healthy foods, participating vendors are selected each week, based on their commitment toward the environment and ethical food production.

“When choosing which local farms and grocery stores to partner with, we consider how much they care about the environment,” said Lee Dan-bi, an official at the market’s organizer, stressing that sustainability is the organization’s core value.

The organizers ask shoppers to bring their own shopping bags or containers. No plastic bags or packaging are provided, except for fresh products. 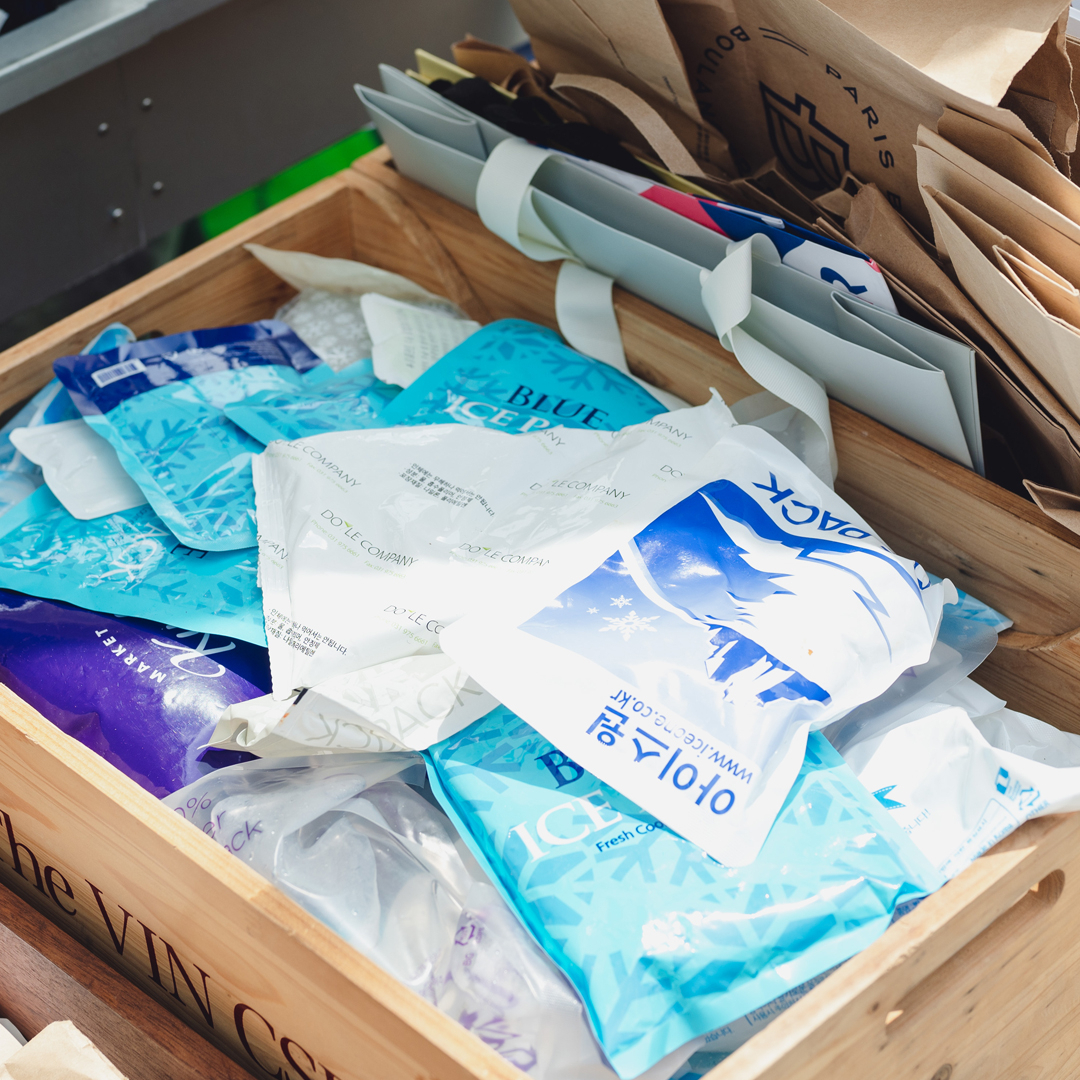 For food items that need to be refrigerated, freezer packs are provided.

Shoppers are encouraged to bring freezer packs or paper ice packs from home. The organizer gives them a 5 percent discount on purchases for doing so. 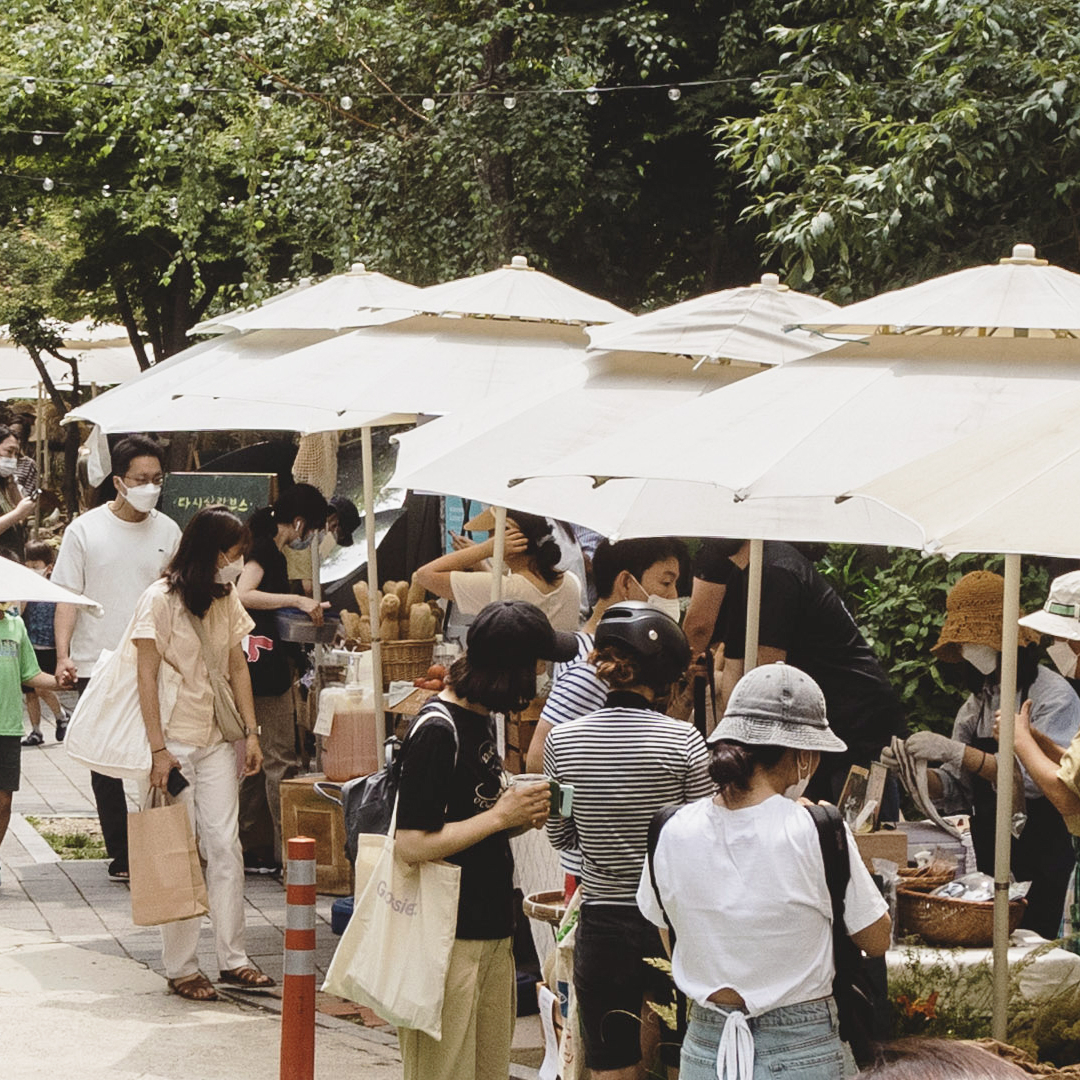 Visitors said a farmers’ market like Marche@ has a unique appeal, compared to shopping at discount stores and large retailers. You get to meet the people behind the products.

"It was interesting to know where and how the vegetables were grown. After hearing stories about the crops that I'm going to cook and eat, I felt somewhat relieved because the products I bought were naturally grown," said Ji Seung-un, a 27-year-old resident in Seongsu-dong. She bought some lettuce and zucchini to make a garnish for steaks.

Marche@ has partnered with more than 200 teams of farmers and merchants since its launch in October 2012.

Opening the first Monday, the second Sunday, and the fourth Saturday of each month, the market runs from 10:30 a.m. to 4 p.m. The location changes from Seongsu-dong to Hyehwa-dong and Seogyo-dong.

The exact time and venue of the upcoming event as well as the list of vendors participating in the events are available at www.marcheat.net.

Farmers’ markets, like outdoor festivals and events, were hit by the COVID-19 pandemic. But they are now coming back. A much larger market, organized by the Seoul Metropolitan Government, kicked off earlier this month, providing local farmers a channel to market their products directly to customers. 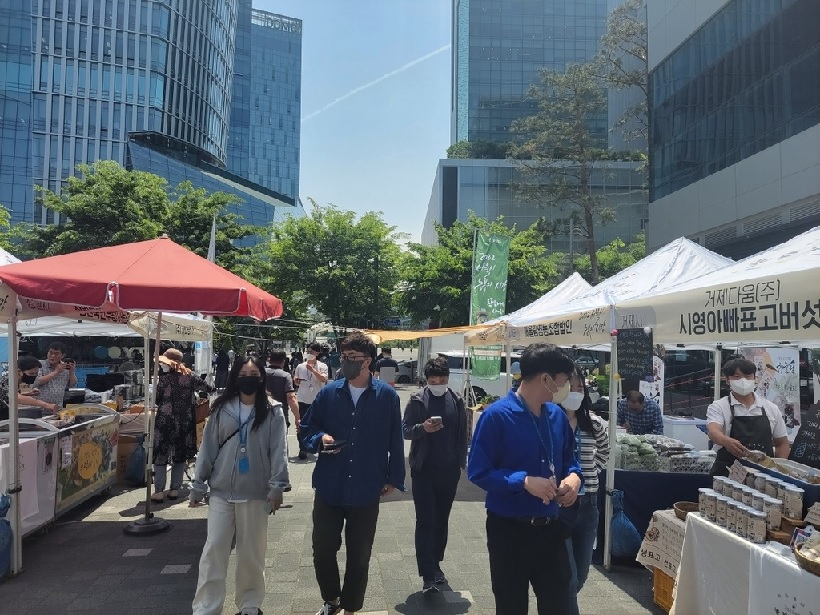 A farmer’s market at the Digital Media City in Mapo District, western Seoul, on Sept. 13. (Yonhap)

Nearly 100 groups of rural farmers from 60 cities across the nation are bringing a wide variety of farm produces to the market, which is held in three different areas, including the Malli-dong Square near Seoul Station, Digital Media City in Mapo-gu and Cheonggye Plaza, at the top of Cheonggyecheon Stream, from 10 a.m. to 6 p.m., until Nov. 25.

The city-run market is held twice a year in spring and autumn.