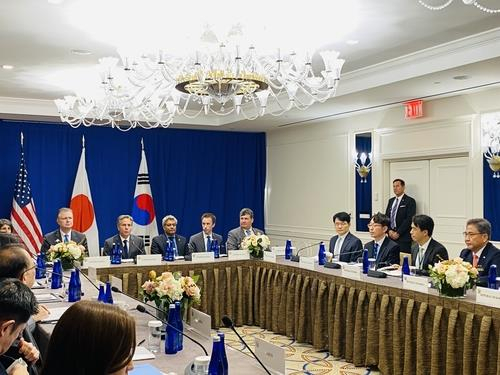 South Korean Foreign Minister Park Jin (right) takes part in a trilateral meeting with US Secretary of State Antony Blinken and Japanese Foreign Minister Hayashi Yoshimasa on the sidelines of the UN General Assembly in New York on Thursday. (Yonhap)

WASHINGTON -- US Secretary of State Antony Blinken on Thursday stressed the importance of trilateral cooperation between South Korea, Japan and the US, urging the countries to work together on regional and global issues.

"The United States, Japan, Korea -- we have the most vital bilateral relationships, but we also have this trilateral partnership," Blinken said at the top of the meeting, held on the sidelines of the UN General Assembly.

"And I think what we have seen over the years, including in recent months, is that when we are working together, we are even more effective. And we're more effective not only in dealing with any regional security issues that are before us, but with a whole series of global issues that are front and center here at the United Nations this week," he added, according to the state department.

"It makes a difference. And I think we can see that in the work that we're doing together," he said.

After the meeting, the South Korean foreign minister said the three also underscored the importance of trilateral cooperation in dealing with North Korea's nuclear ambition.

"We discussed the need to be prepared to closely work together and sternly react with regard to North Korea's threat to use nuclear weapons," Park told reporters.

North Korea said earlier this month that its parliament legislated a new law that allows Pyongyang to launch an "automatic nuclear strike" when the country is attacked.

The top diplomats of South Korea, Japan and the US expressed concerns over North Korea's destabilizing messaging related to the use of nuclear weapons, according to a joint statement released later.

"The secretary and foreign ministers urged the DPRK to abide by its obligations under relevant UN Security Council resolutions and called for full implementation of these by the international community," it said, referring to North Korea by its official name, the Democratic People's Republic of Korea.

"They reaffirmed that a DPRK nuclear test would be met with a strong and resolute response from the international community," it added.

The three ministers also called on North Korea to engage in dialogue.

"They stressed the importance of serious and sustained dialogue and urged the DPRK to return to negotiations," said the joint statement.

"To this end, Secretary Blinken and Minister Hayashi expressed support for the goal of the ROK's "Audacious Initiative," it said, referring to South Korea by its official name, the Republic of Korea.

The Audacious Initiative refers to a recent proposal by Seoul to launch economic aid programs for the impoverished North as long as Pyongyang shows its commitment to denuclearize.

North Korea has initially rejected the offer as it also remains unresponsive to other US and South Korean overtures for dialogue. (Yonhap)