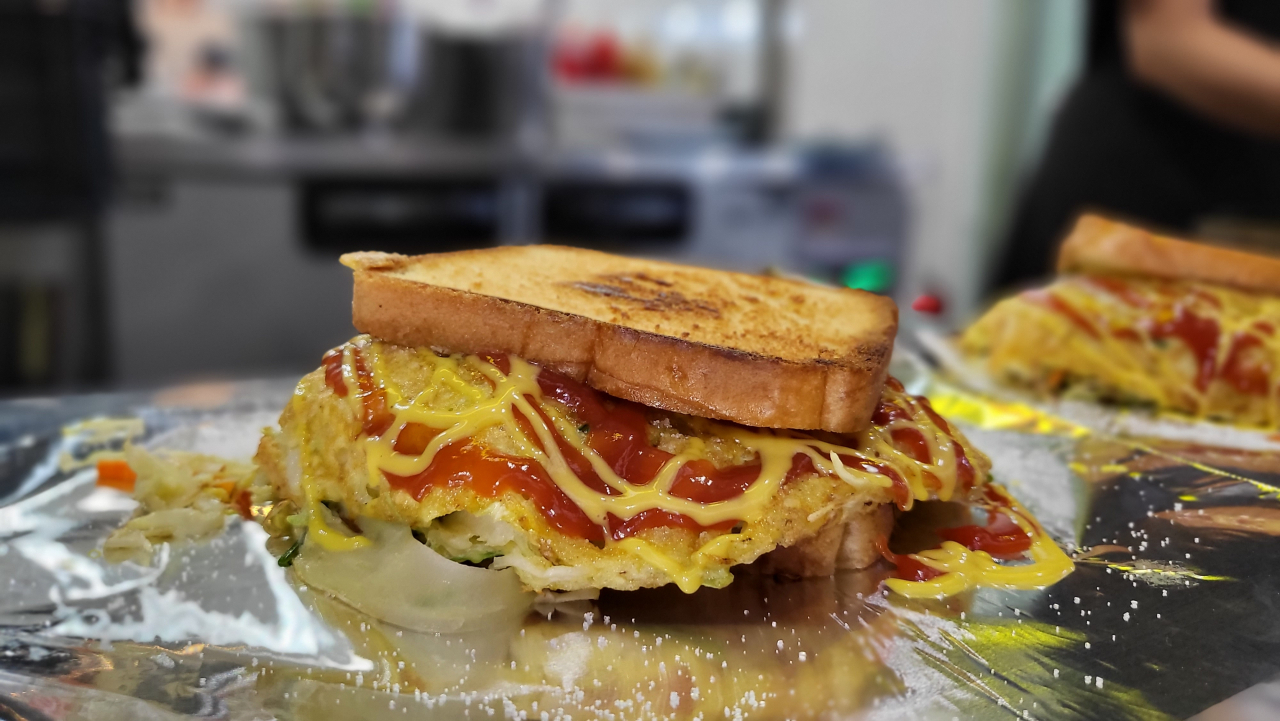 Most travelers seek out popular restaurants while visiting a foreign country. But spontaneous ventures to street vendors can leave a lasting impression, if one finds the right place.

From ordering food at crowded outdoor vendors to enjoying small talk with the staff before the menu is served, the unique cultural codes of the city are easily captured through the experience.

Gilgeori toast, or Korean street toast, is one of the main street food menus for commuters who want to grab a quick breakfast before heading into the office. It also is a popular after-school snack for kids.

Aside from the filling of pan-fried vegetables and eggs, what stands out in Korean street toasts is the sugar and ketchup. Although this might sound odd at first, once you take a bite, you'll find the ingredients go together surprisingly well. Koreans call this flavor "danjjan" style, meaning sweet and salty.

Earlier this year, popular British YouTubers Josh Carrott and Ollie Kendal opened a Korean street toast pop-up store in London King's Cross railway station. It soon became a sensation, and the two went on to open a small Korean toast restaurant. The toast there is priced at some 5.5 pounds ($6).

But in Seoul, a street toast can be had for half the price with many variations to choose from. 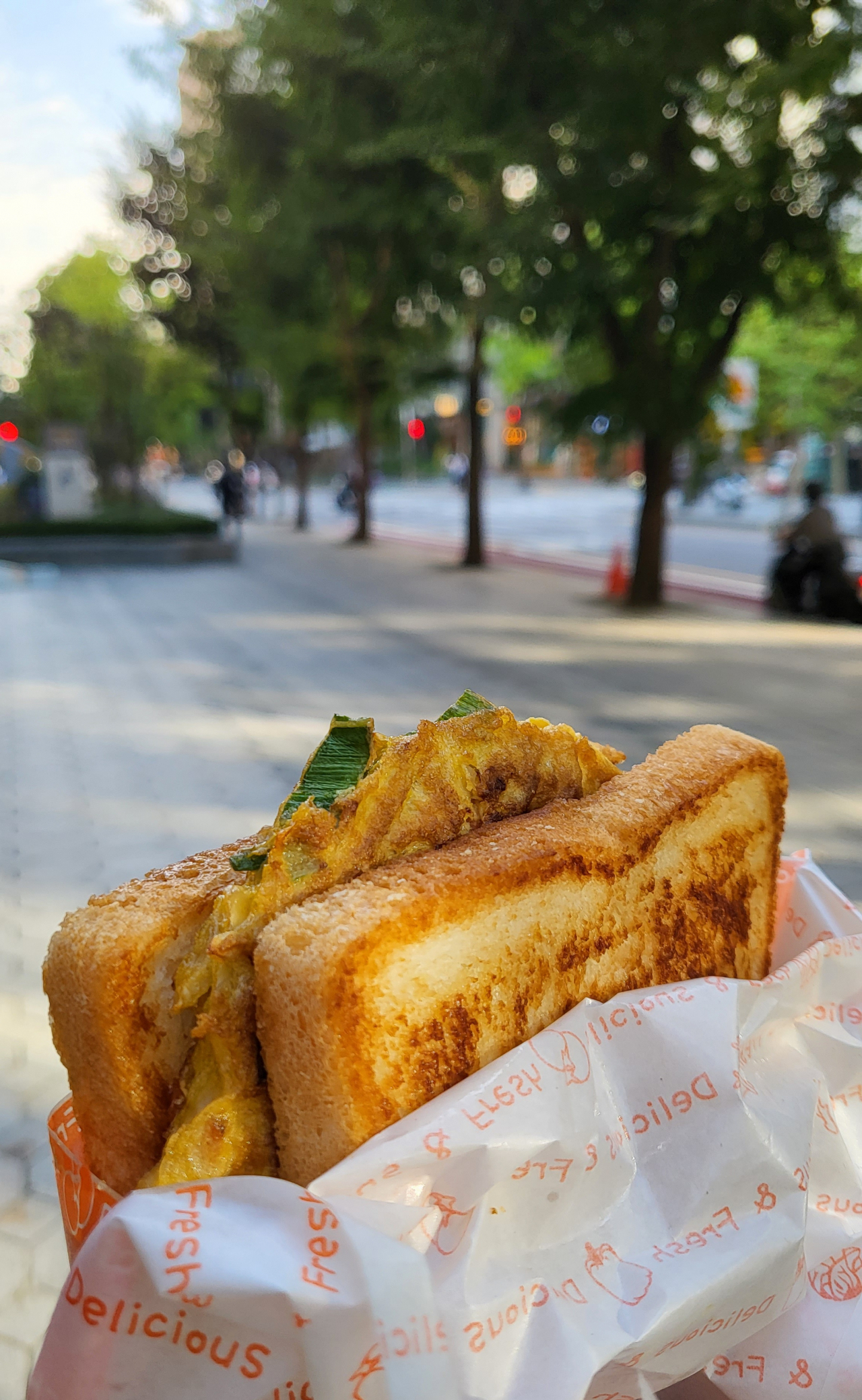 Toast served at a Yeouido toast stand, situated a block away from Yeouido Station (Kim Hae-yeon/ The Korea Herald)

- Yeouido toast stand near Exit No. 3

At 7:30 a.m. in Yeouido, Seoul's financial district, roads are already packed with cars, and office workers rush out of subways stations and buses.

Among the crowd, around one-third are seen heading to nearby cafes or street food carts for a quick morning bite.

Located in an alley on the right from Yeouido Station's Exit No. 1, an ivory-painted stand with handwritten menus, greets those with the familiar scent of toasted bread.

Morning egg toast is their specialty, and fish cakes are being sold as a side along with coffee. Upon ordering a toast, a complimentary cup of fish cake soup is offered while one waits.

"Just a decade ago, rivalry formed among toast-making carts here in Yeoeuido. These days, the jumeokbap (stuffed rice balls) stands have become popular, so I think I am the only one sticking to the toast menu around this complex," the owner of the food stand said.

The freshly made warm toast is not as buttery and has a light and clean finish. Two slices of crispy bread with chopped cabbages, onions, bell peppers, scallions and beaten eggs on the inside, makes it a filling meal.

Toast at the Yeouido stand is priced at 3,000 won. The stand closes before noon. 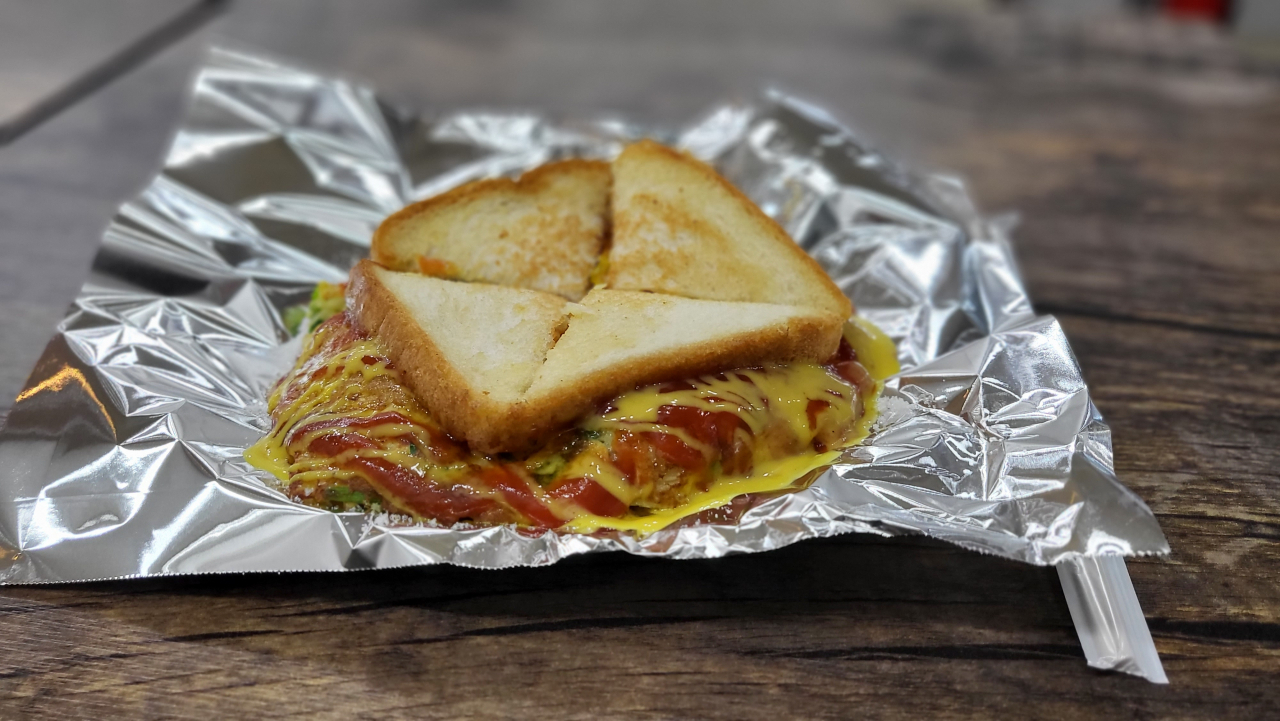 Changdong Halmeoni Toast, located inside Changdong Market, in between Ssangmun station and Suyu station, has been in the business for over 35 years.

The four toast menus are ham, cheese, ham and cheese and its signature, the halmeoni toast.

The "halmeoni," or "grandmother in Korean, owner of the toast vendor, passed away in 2020, and her daughter-in-law continues to serve guests.

"We come here after work, just in time for evening snacks for our kids after school," a couple in their 40s told The Korea Herald. "I sometimes feel jealous that my kids love halmeoni toast more than the dinner that I make," the woman said with a smile.

Known for its generous filling, frequenters have given the halmeoni toast a nickname, "Daewang Toast," meaning "jumbo toast."

The halmeoni toast is pretty much a giant omelette with assorted vegetables, almost bigger than the size of an adult's hand, sandwiched between two slices of bread.

You can also request to skip the sugar and ketchup. 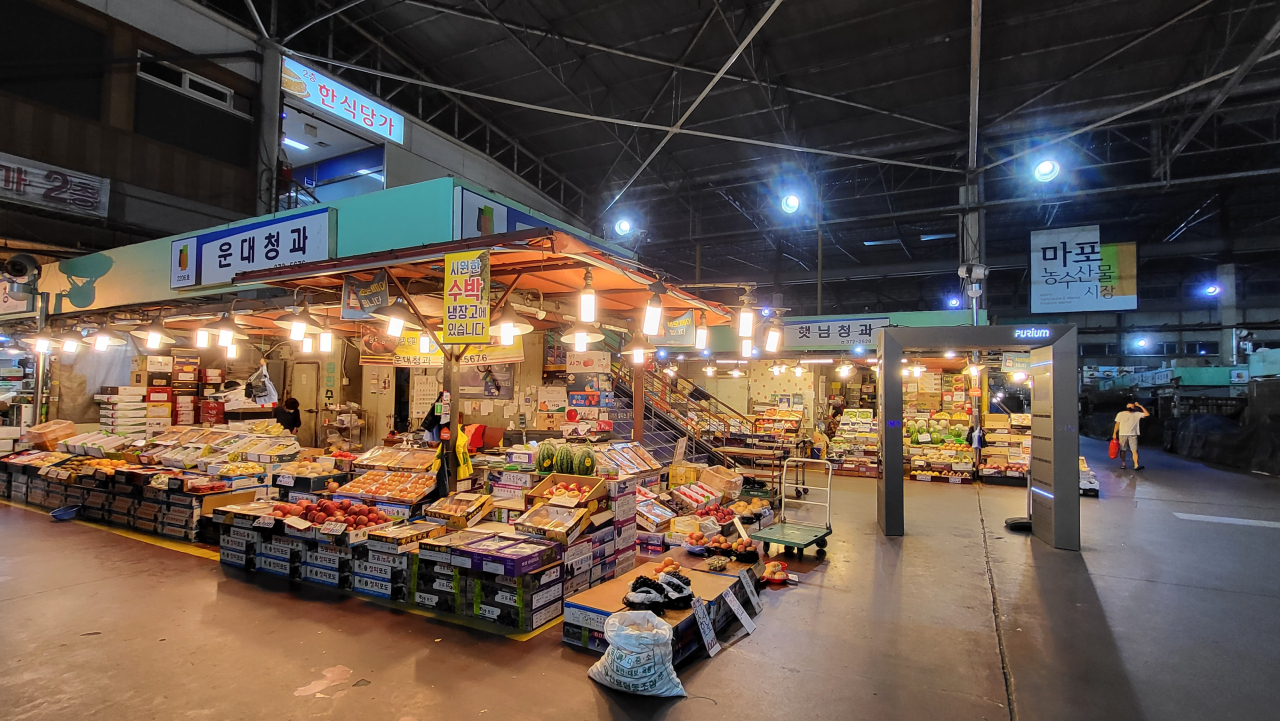 A view of the Mapo Agricultural and Marine Products Market in northern Seoul, on Monday (Kim Hae-yeon/The Korea Herald)

Located on the ground floor of the Mapo Agricultural and Marine Products Market, Teo-Sarang welcomes both customers and market staff from the break of dawn.

The toast vendor, located at the market's entrance No. 3, opens at 5 a.m. in the morning, along with most other market stalls.

The ingredients are kept simple, according to the manager -- ample margarine, chopped onions, green onions, carrots and eggs.

The toast at Teo-sarang is relatively less sweet, since the beverages on the menu make up for it.

A small cup of dabang coffee, an old-style coffee with creamer and sugar, or sikhye, a sweet Korean rice punch, can be enjoyed at the cost of 1,000 won each. 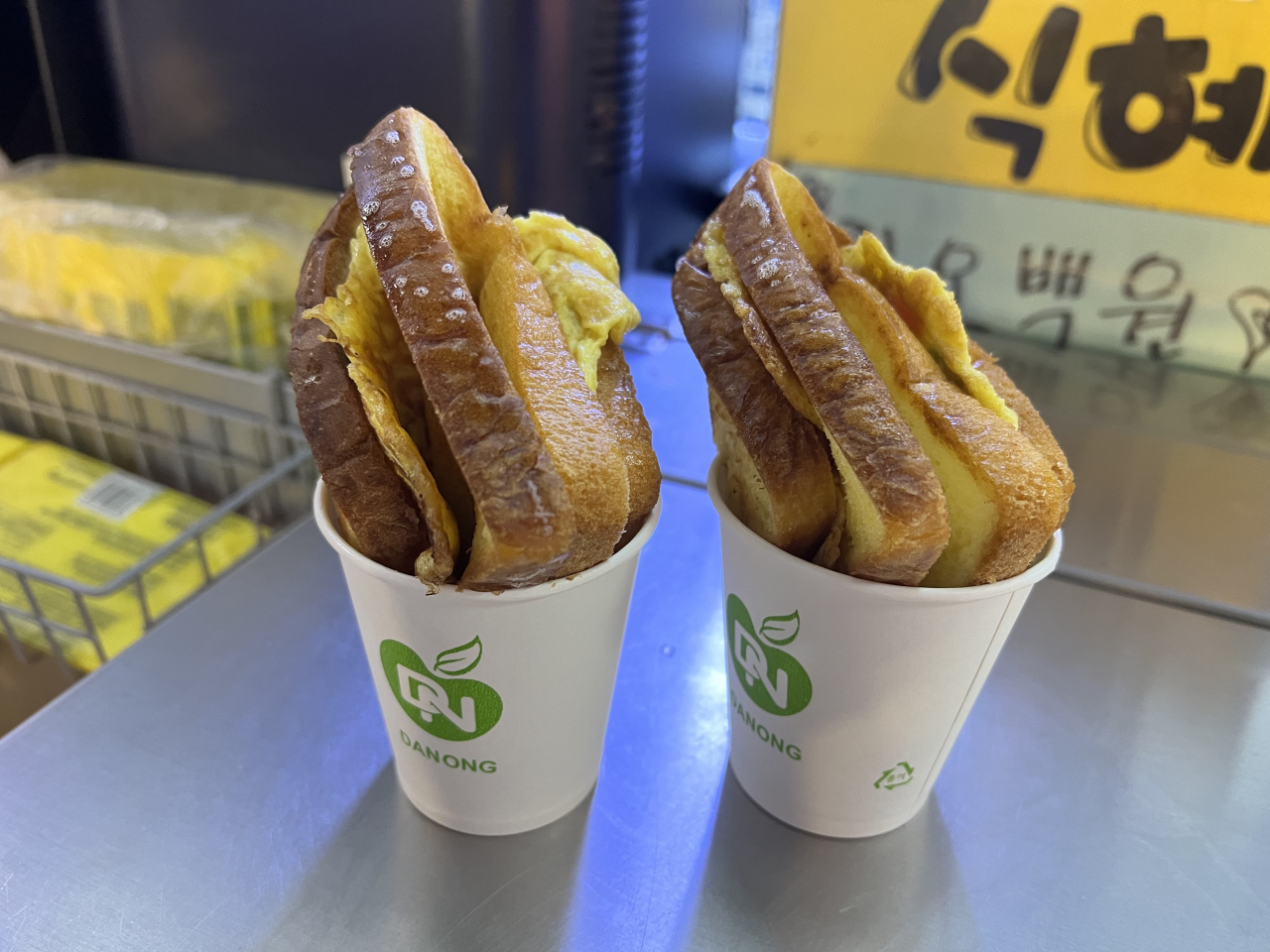 The manager flaunts her cooking skills to customers every once in a while, spreading margarine evenly on the grill and flips the toast with a swift flick of her wrist. The texture of the toasted bread is soft and moist, falling on the less crunchy side.

"We started our business at this stand selling gilgeori toasts, and now we have our own dessert cafe on the upper floor of the market, also named Teo-sarang. But they do not make toasts, so make sure to visit the ground floor if you are looking for a hearty snack," the manager said.