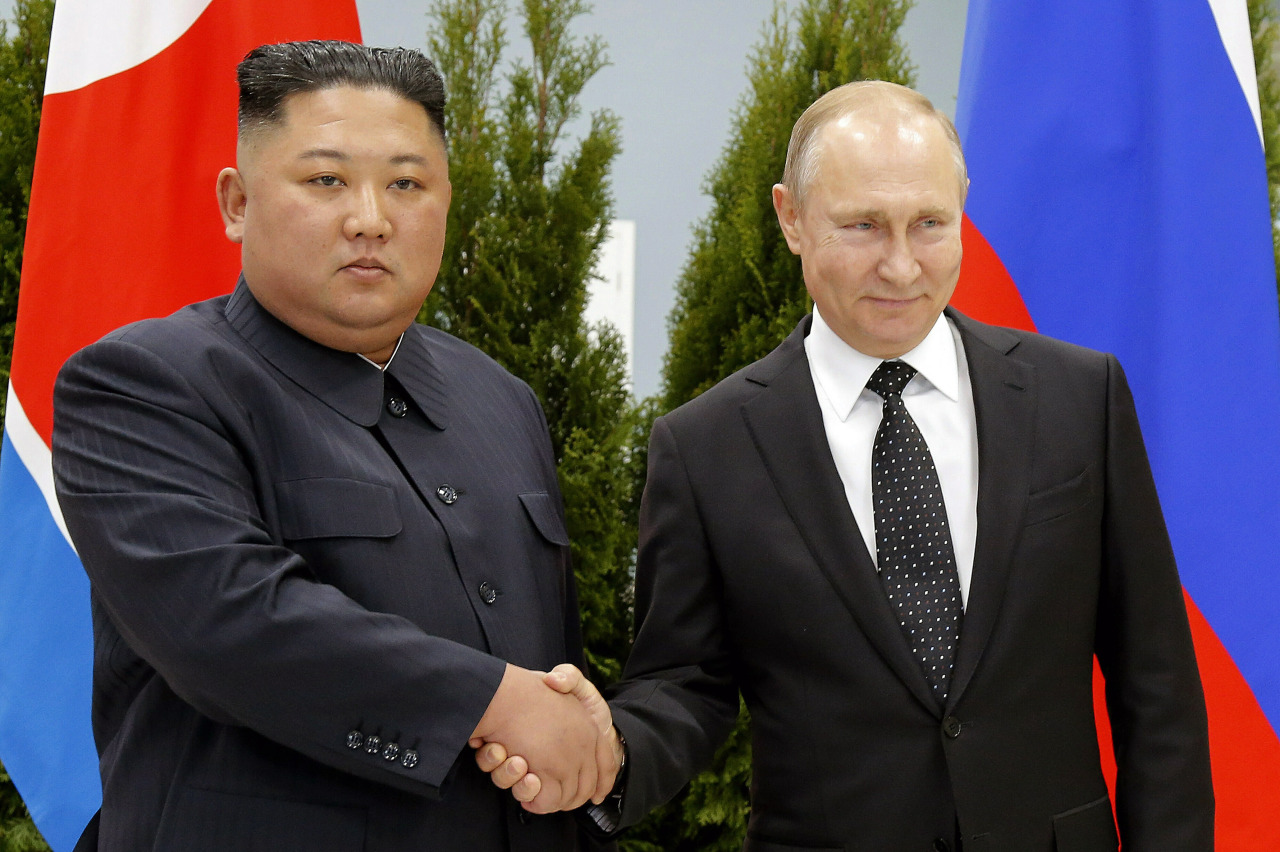 Russian President Vladimir Putin, right, and North Korea`s leader Kim Jong-un shake hands during their meeting in Vladivostok, Russia, April 25, 2019. North Korea says it has not exported any weapons to Russia during the war in Ukraine and has no plans to do so, and said U.S. intelligence reports of weapons transfers were an attempt to tarnish North Korea`s image. (FILE PHOTO - AP)
North Korea’s Defense Ministry said that the country has never supplied weapons to Russia and denounced the US for spreading “groundless” rumors, the state-run Korean Central News Agency reported Thursday.

An unnamed vice director general of the General Bureau of Equipment at North Korea’s Defense Ministry issued a pronouncement on Wednesday to refute the US’ recent public statements on Russia’s request for North Korea to provide rockets and artillery shells, according to KCNA.

“We have never exported weapons or ammunition to Russia in the past and we do not have any plans to do so in the future,” the military official said in the Korean-language press statement, adding that the US is setting “groundless” rumors afloat.

“The hostile forces, including the US, are clamoring about the violation of the UN Security Council resolutions while spreading rumors about the arms trade between our country and Russia.”

The military official underlined that North Korea has never recognized the “unlawful and atrocious UN Security Council sanctions resolutions on the DPRK, which have been fabricated by the US and its vassal forces.”

Earlier this month, the White House and the US Defense and State departments concurrently admitted that the US had indications of Russia approaching North Korea to request supply weapons to resupply its force fighting in Ukraine.

At that time, US State Department deputy spokesperson Vedant Patel said Russia’s Defense Ministry was “in the process of purchasing millions of rockets and artillery shells from North Korea for use in Ukraine.”

But in the statement, North Korea’s Defense Ministry argued that the “development, production and possession of military equipment, as well as imports and exports to and from other countries, are the inherent and legitimate right of a sovereign state.”

“No one is entitled to argue against it,” the statement read.

North Korea’s Defense Ministry claimed that the US’ goal is to “tarnish the image of the DPRK.”

“We strongly condemn the US for recklessly circulating rumors and slanders against the DPRK to pursue its heinous political and military goals, and we give a solemn warning,” the statement read. “It would be better for the US to stop blurting out ludicrous statements that preposterously pick on the DPRK and to hold its tongue.”

Neither the US State Department nor the Defense Department did not immediately respond to The Korea Herald’s request for comment on Thursday.

North Korea swiftly issued the statement after a senior official at the US Treasury Department elucidated that the US will respond to arms supplies by North Korea and Iran to Russia with further sanctions to block Russia’s efforts to replenish its depleted stocks of weapons by evading economic sanctions.

The Treasury Department will continue to levy sanctions against entities involved in prohibited arms supplies to Russia to hold them accountable, Elizabeth Rosenberg, Treasury assistant secretary for terrorist financing and financial crimes, said before the Senate Banking Committee hearing on Tuesday.

Yang Moo-jin, a professor at the University of North Korea Studies, said the Defense Ministry’s statement aims to “shed light on the problems of the US hostile policy toward North Korea during the UN General Assembly” rather than showing the North Korean military’s resistance.

In his speech at the UN General Assembly, US President Joe Biden said Wednesday that North Korea “continues to blatantly violate UN sanctions” despite the US efforts to “begin serious and sustained diplomacy.” Biden singled out North Korea, China, Iran and Russia as the countries showing “disturbing trends” that undermine the nuclear non-proliferation regime.