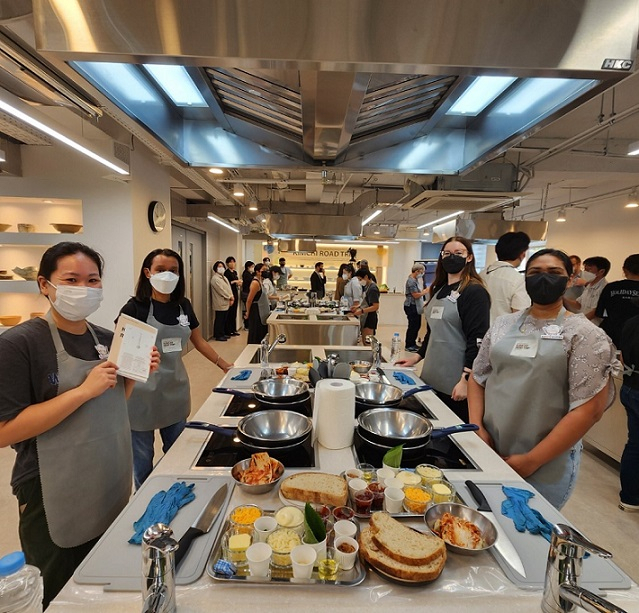 For those unacquainted with Korean cuisine, kimchi can taste and smell a bit strong.

But don’t let that first impression scare you off from the amazingly rich, versatile and savory world of kimchi, says Son Jong-won, executive chef of L’Amant Secret, a Michelin-star restaurant at L'Escape Hotel in Seoul.

At a cooking demonstration on Tuesday with 20 foreign guests, the chef showcased how the fermented cabbage, which has a varying mix of pungent, sour and spicy tastes, can take a surprisingly pleasant starring role in typical Western dishes, such as a grilled cheese sandwich. 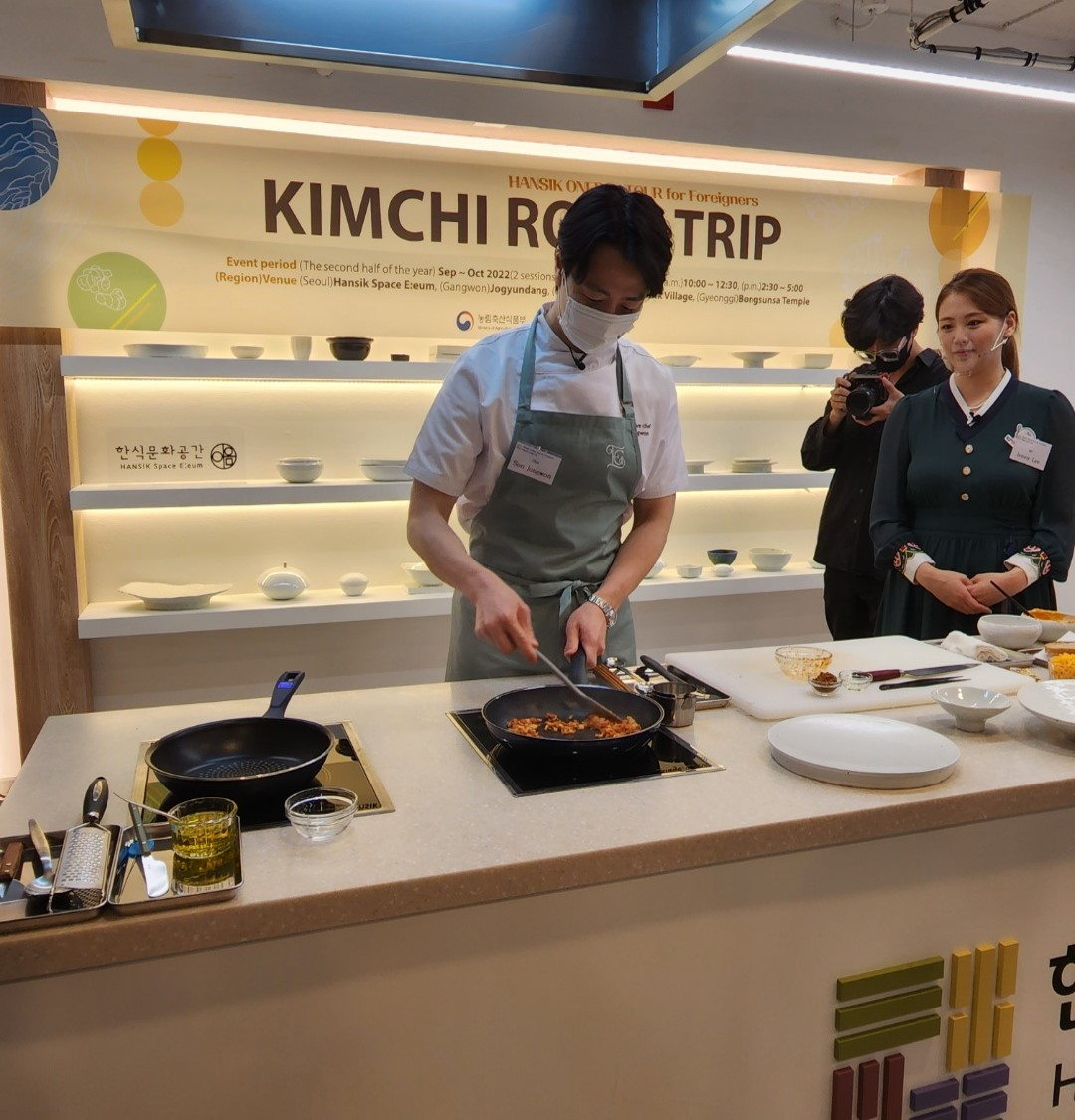 "I prepared easy recipes for kimchi that can be done with simple ingredients like cheese, butter and bread that foreigners are familiar with," said Son after the event, which was held Tuesday at Hansik Space E:eum in Seoul's Bukchon. The cooking class was organized by the Korean Food Promotion Institute as part of its “Kimchi Road Trip” program.

"Grilled cheese sandwich with Korea's napa cabbage kimchi is easy to cook and eat. Kimchi bites are fried because fresh kimchi's strong taste and smell are sometimes too much for some foreigners,” he added. 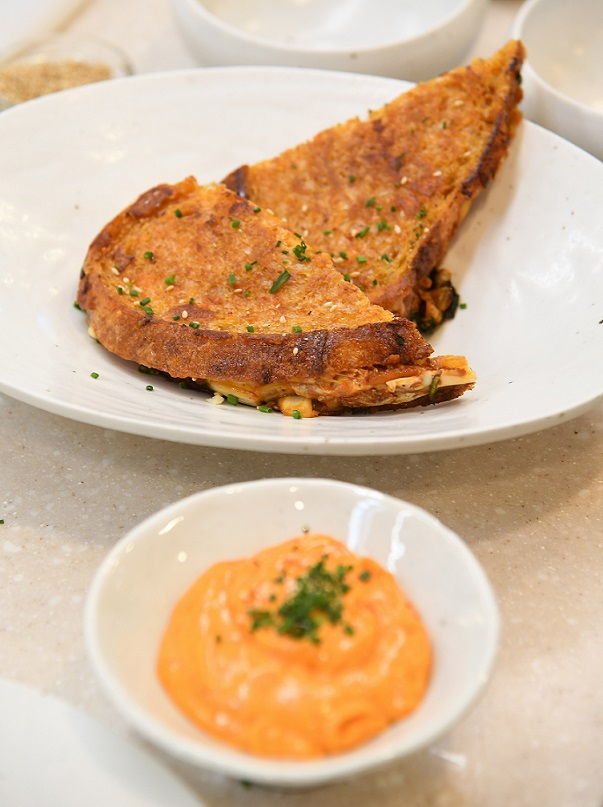 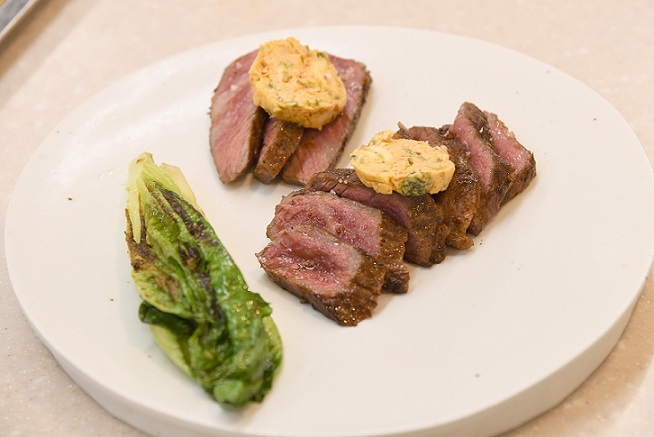 After the chef’s demonstrations, participants tried their hand at making the sandwich.

Nisha, a participant from the UK, said she much prefers kimchi when it is cooked rather than raw.

“I once tried to eat fresh kimchi with white rice, but it was a bit bitter and spicy,” she said. The chef’s recipe perfectly fits her taste and she plans to try it at home, she added.

Korean restaurants are popping up in London, where she came from, on the back of the growing influence of Korean culture, she said, buoyed by the success of K-pop band BTS, Netflix hit series “Squid Game” and the Oscar-winning “Parasite.”

"I found today’s one-day cooking class very informative and entertaining. It will give foreigners here better access to Korean food."

Another participant from Canada, Alice Hong, said her favorite Korean food is kimchi pancake, or kimchijeon.

“Fresh kimchi tastes sour to me, but it’s good when it’s cooked with other ingredients. I’d like to try today’s recipe again another time." 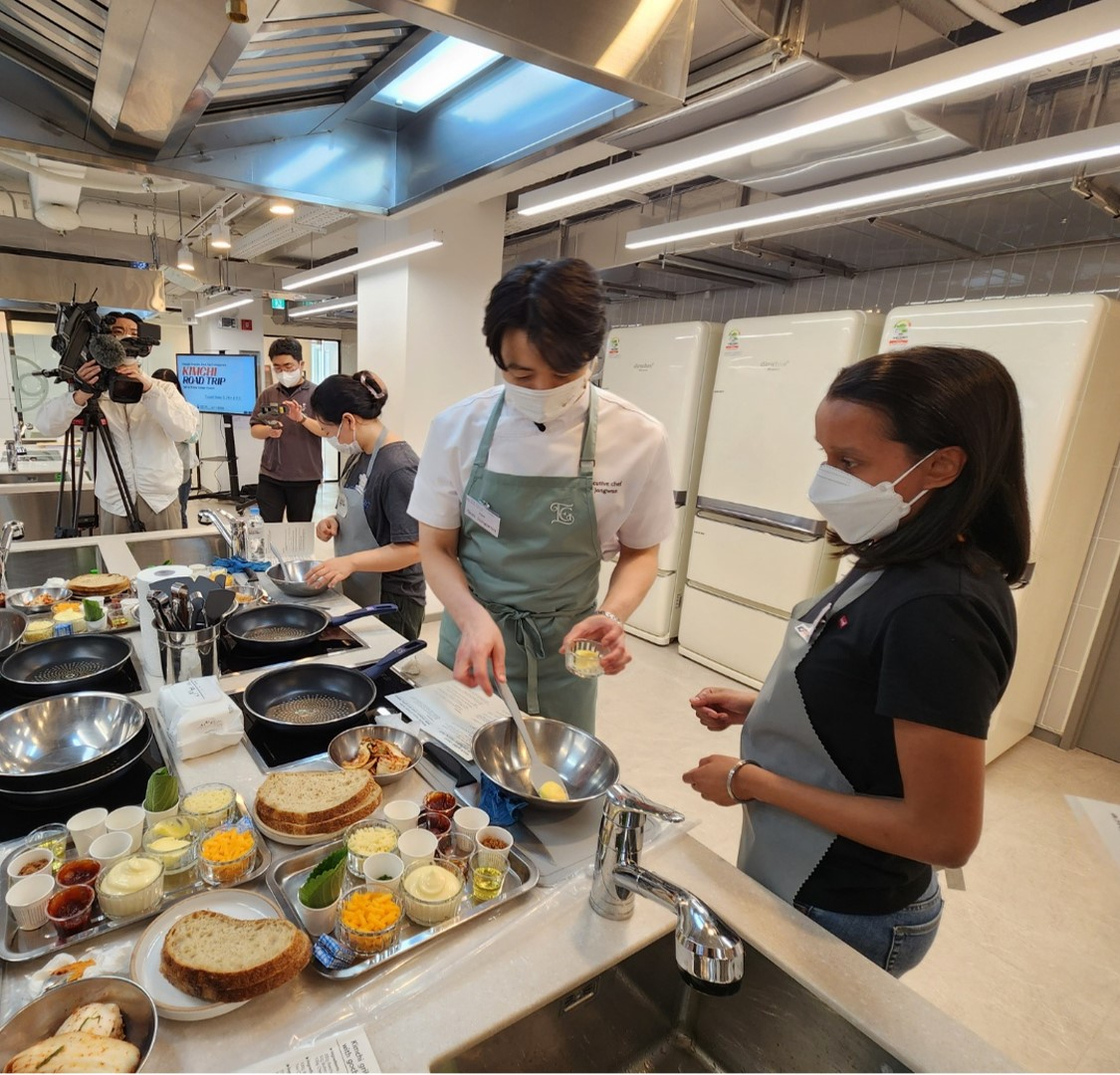 Nisha (right) is assisted by a chef as she tries her hand at making a compound butter flavored with red pepper paste. (Choi Jae-hee/The Korea Herald)

Son said other than the traditional spicy cabbage kimchi, there are many different types of kimchi that have not yet been introduced to the global food scene, such as white kimchi and cucumber kimchi.

“I think more foreigners would enjoy kimchi if they are given better access to various kimchi variations. To globalize kimchi, it is really important to identify what types of kimchi are received better by foreigners and present dishes that incorporate kimchi into Western cuisine," he said.

Tuesday’s event was the first installment of a four-city tour of free one-day classes on kimchi, dubbed “Kimchi Road Trip.”

Featuring the star chef, the cooking demonstrations are followed by cooking and tasting sessions for the participants. Along with the sandwiches they made, participants were served chef-made strip loin with kimchi butter garnish, paired with traditional Korean liquors. 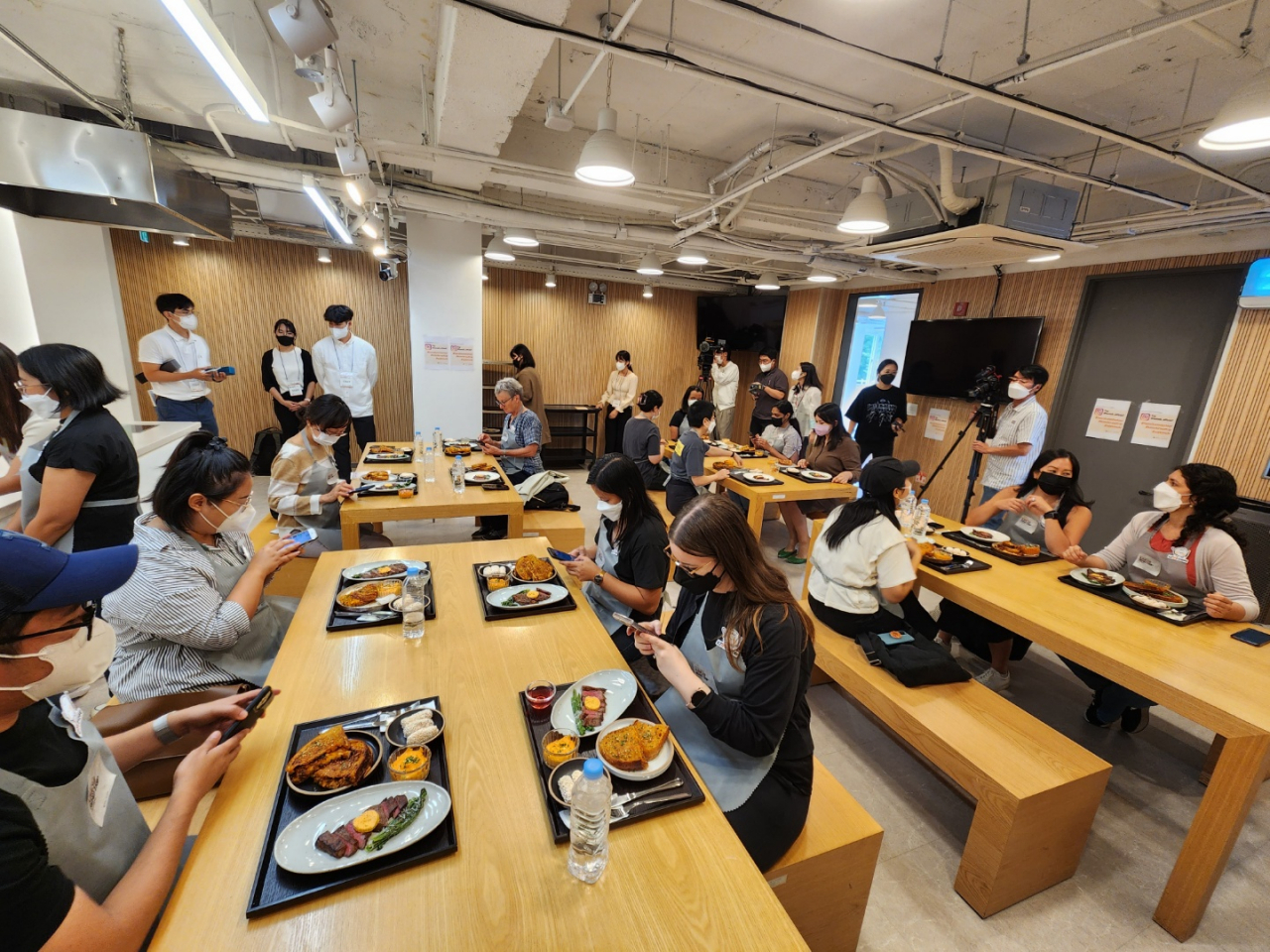 Participants get to taste the kimchi grilled cheese sandwich they made along with chef-prepared strip steak. (Choi Jae-hee/The Korea Herald) 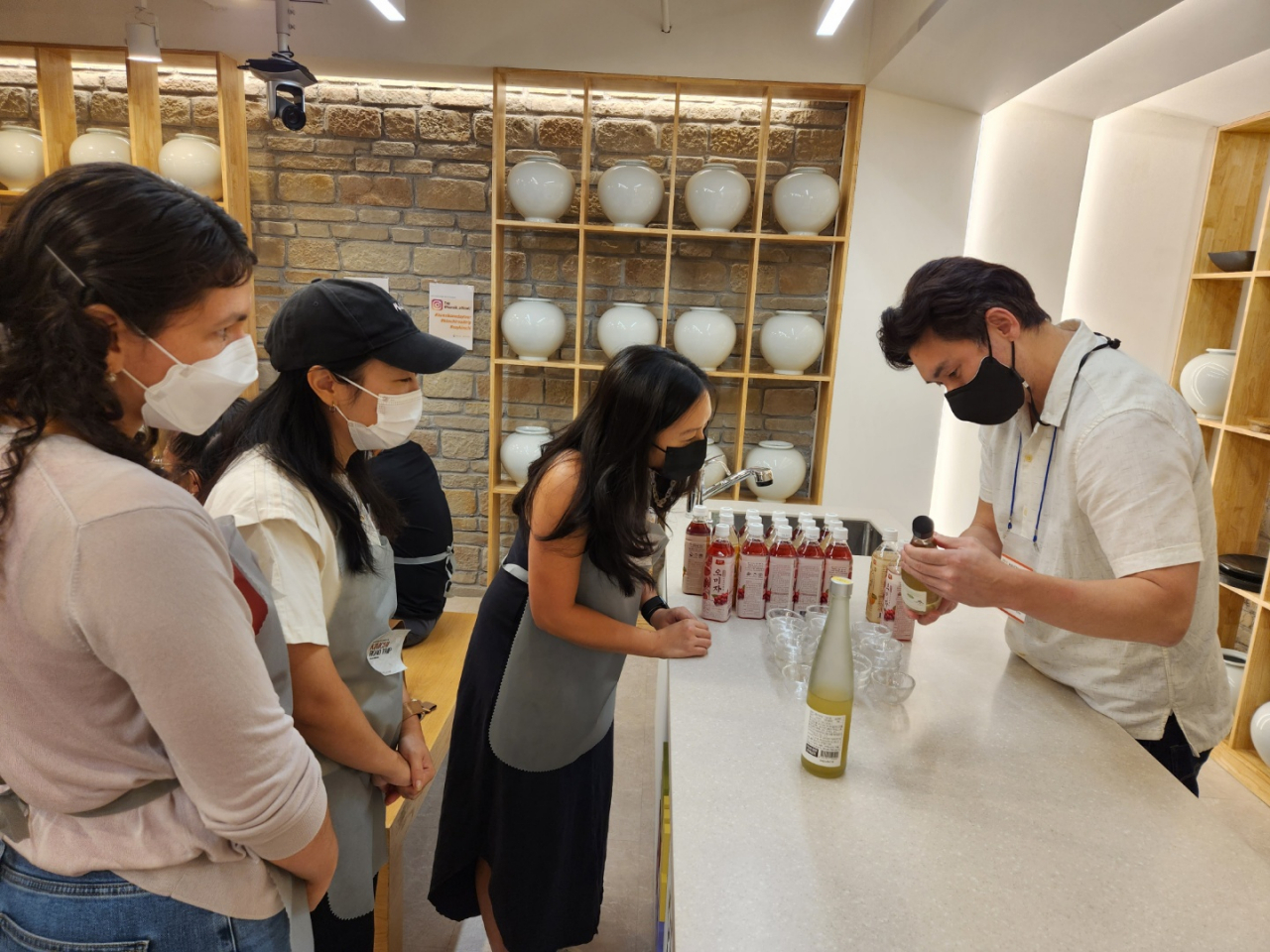 Launched jointly by the Ministry of Agriculture, Food and Rural Affairs and the Korean Food Promotion Institute, the program intends to promote culinary tourism among foreign travelers. 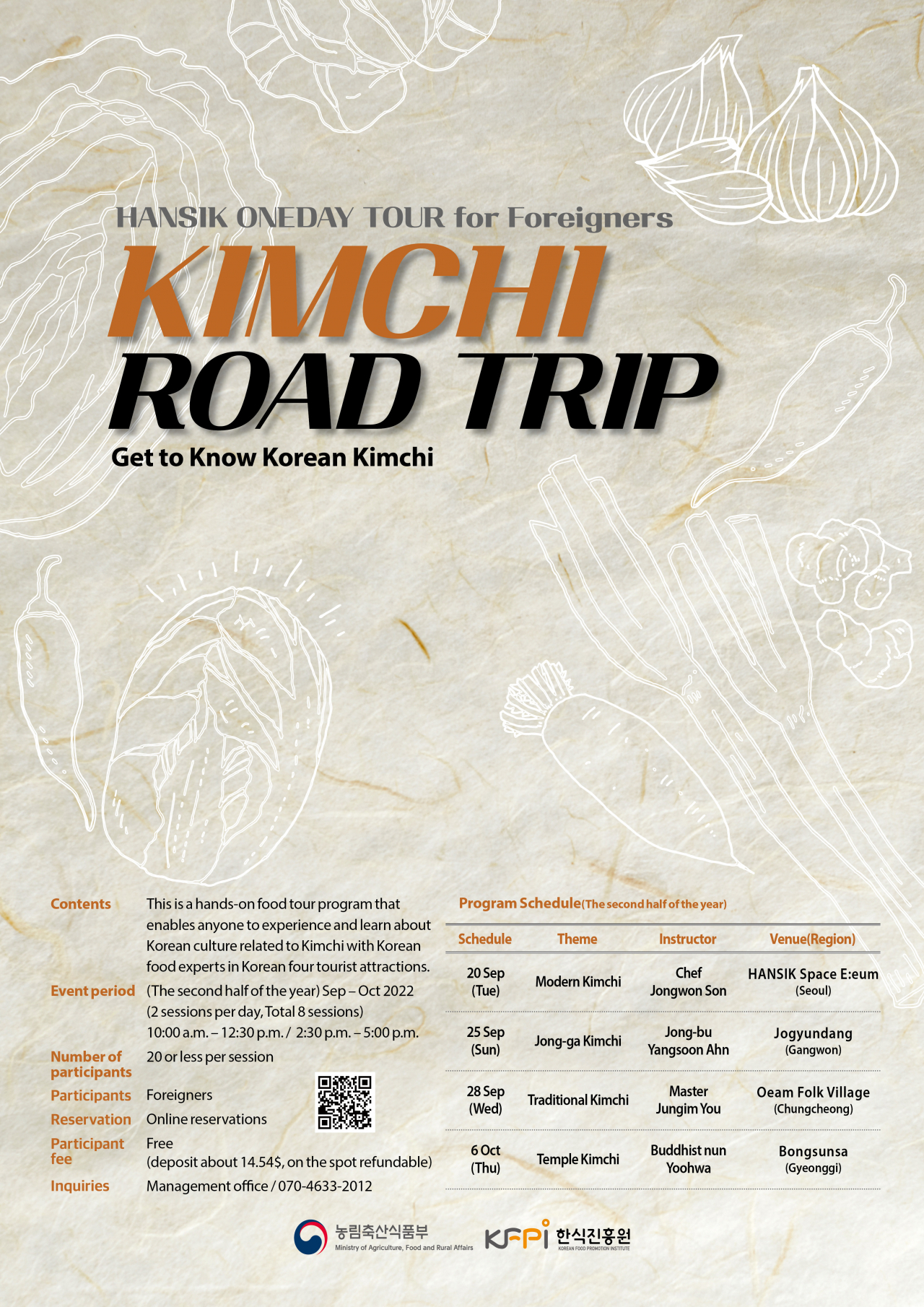 A second event is slated for Sunday in Youngwol-gun, Gangwon Province, covering the history and culture of kimchi-making carried on by “jongga,” or the head family of a respected clan.

The historic village Oeam, located some 8 kilometers south of Onyang in Asan, South Chungcheong Province, will host the third event on Sept. 28, which will focus on the tradition of kimchi-making unique to the region.

The last event, slated to be held on Oct. 6, will introduce Korea's Buddhist temple kimchi at the temple Bongseonsa in Namyangju, Gyeonggi Province.

Cooking classes are held twice a day. Participants can only attend once.

Applicants will be required to pay a deposit of 20,000 won, which will be refunded at the venue. Each session hosts a maximum of 20 people on a first-come, first-served basis.