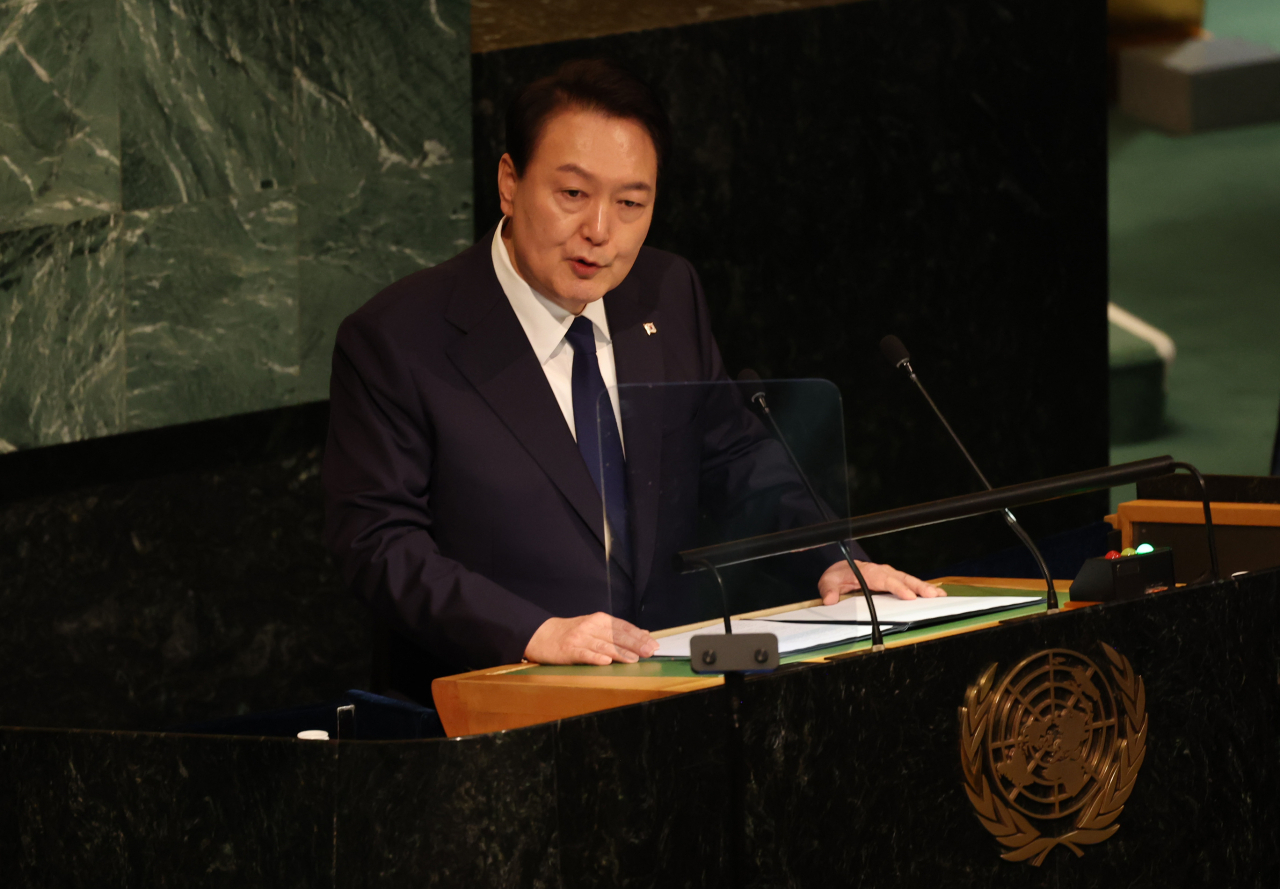 President Yoon Suk-yeol left North Korea out of his first UN speech, an unusual move for a South Korean leader speaking at a multinational event, in what watchers say is likely to be a calculated move.

On Tuesday afternoon in New York, Yoon delivered his first speech at the UN General Assembly, expressing his willingness to take a leading role in international cooperation to protect the international order based on freedom, human rights and the rule of law.

He vowed to actively participate in the international community's efforts to promote peace and prosperity for future generations.

Yoon said the global community was yet again witnessing the freedom and peace of its citizens put in jeopardy due to attempts to alter the status quo by force, and that nuclear weapons and other weapons of mass destruction posed increasing threats to humanity.

“Such threats to freedom and peace must be overcome through solidarity and fearless commitment to the framework of universal global norms consolidated over the years within the UN system,” Yoon said.

As humanity strives to defend freedom and build lasting peace, the UN’s role is indispensable, he said.

He made no mention of North Korea in his speech. Yoon only called "weapons of mass destruction, including nuclear weapons," a threat to freedom and peace.

It was very unusual for the South Korean leader not to mention North Korea on the UN stage, which he could have used to inform the world of issues on the Korean Peninsula. This was in contrast to former President Moon Jae-in, who mentioned peace issues on the peninsula to the international community during multiple speeches at the UN General Assembly throughout his five-year term.

Park Won-gon, a professor in the department of North Korean studies at Ewha Womans University, said, “It is quite intentional to exclude North Korea from a UN General Assembly speech. It's an act of deliberate disregard.”

Previous South Korean presidents have never failed to mention North Korea at the UN General Assembly, since North Korea is a matter of global concern and an issue in which the UN is bound to intervene very deeply, Park said.

"But, this time, Yoon intentionally did not mention the North to show he won't be dragged around by them."

Earlier, North Korea publicly rejected President Yoon's "audacious initiative,” referring to a proposal for engaging North Korea and providing aid in return for steps toward denuclearization. In fact, Kim Jong-un announced a nuclear weapons policy to make its status as a nuclear-weapons state irreversible on the country’s 74th anniversary on Sept.9.

Kim Geun-sik, a professor at Kyungnam University who joined President Yoon’s camp in the presidential election, said in a local MBC radio interview on Wednesday: "There seems to be a tactical calculation that (Yoon) did not speak about (the North) at the UN General Assembly, as the North is not ready to respond to the South's proposal."

Rep. Yoon Gun-young of the Democratic Party of Korea, who served as the presidential secretary for state affairs under the Moon administration, also appeared on the same radio program and said, "I think it was a strategic judgment not to use the word North Korea."

In response, a senior presidential official said on the condition of anonymity: "There is nothing to add or subtract from the message about North Korea already made when announcing the audacious initiative.”

Discussion on NK with UN Secretary-General

"If North Korea chooses a better way to open its doors, I think the Korean government, international financial institutions and Northeast Asia will spare no expense in large-scale investment and financial support," Yoon told Guterres. "We will do our best to open the closed door."

Nevertheless, if the North conducts a nuclear test and makes further provocations, Yoon asked Guterres to pay attention and provide support so that the international community can respond firmly with one voice.

In response, Guterres said the president and South Korea can trust the UN, adding the UN Security Council will clearly respond to provocations that threaten freedom and peace.

"We agreed that the help of international financial organizations and international institutions can be fully received when attempting to open up with the denuclearization of North Korea,” Kim said, according to the presidential office.

As to why the North Korea issue was on the agenda in Yoon’s meeting with the UN secretary-general although it was not in the speech, professor Park said, "Yoon can talk about it in a much more comfortable situation because it was a bilateral talk. Also, what else could be on the agenda besides the North when talking with the UN secretary-general bilaterally?"

But Kim said it is difficult to trust Guterres’ reassurance that Korea can "trust" the UN regarding North Korea, as the organization has so far shown "lethargy" over the issue.