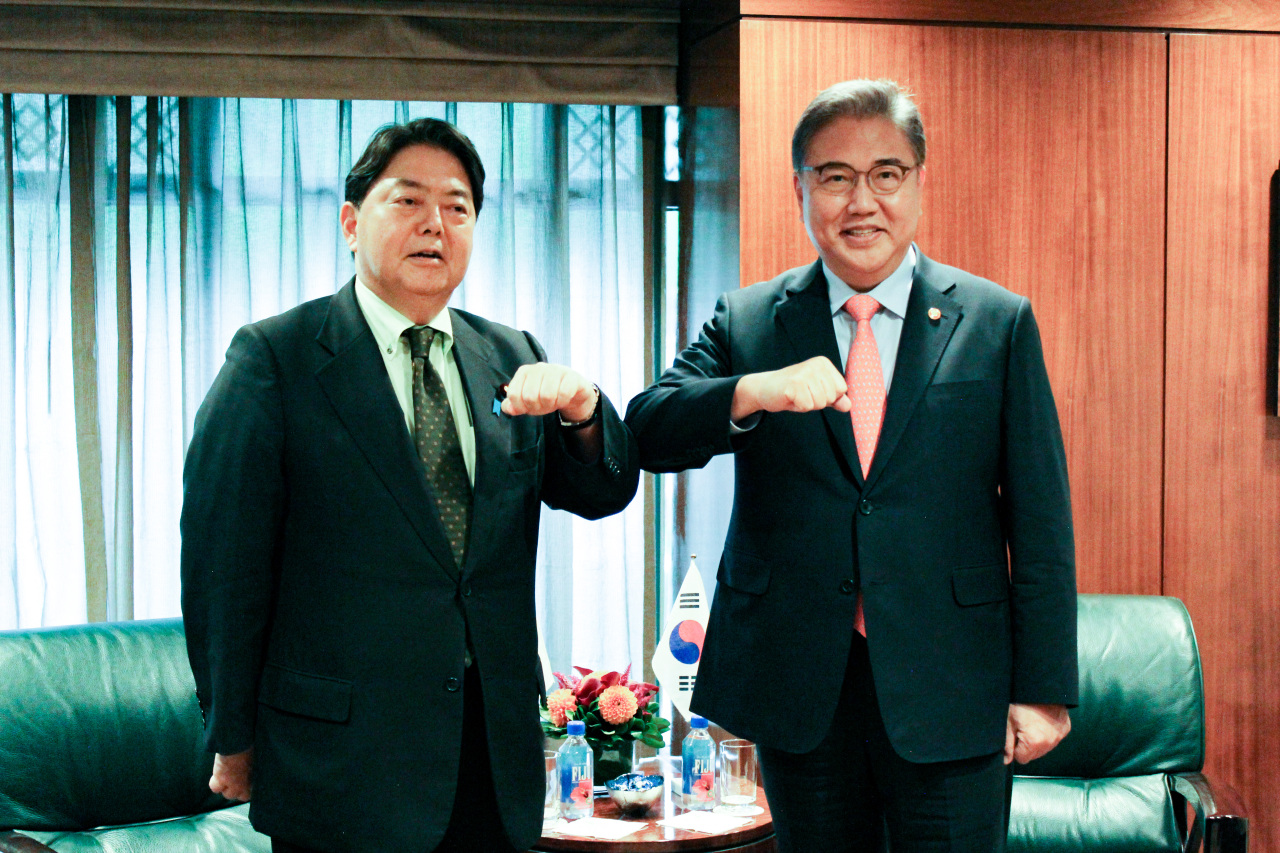 In their meeting held for some 50 minutes, the two ministers agreed to continue to strengthen bilateral, and also trilateral cooperation with the United States, in light of the fast-changing geopolitical environment.

As historic disputes, including Japan's forced labor issue, have strained ties between Seoul and Tokyo for several years in the past, the two ministers also vowed to make sincere efforts to come to a resolution.

"We had a good talk. We agreed to make sincere efforts from each side to improve the Korea-Japan relations," Park told reporters in New York after his meeting with Hayashi.

Their meeting was held in a "friendly" atmosphere, according to a Korean ministry official who requested anonymity.

“Today’s meeting was held a month after the two ministers met on the sidelines of the Cambodia meeting in August, under the consensus that they need to closely communicate to improve the bilateral relations of Korea and Japan,” the ministry official said.

The two last met during the 55th meeting of the foreign ministers of the Association of Southeast Asian Nations, held in Phnom Penh, Cambodia, in August.

The two ministers also exchanged opinions on the forced labor issue, which remains the key sticking point of discussions on repairing ties.

In 2018, Seoul's Supreme Court delivered a ruling on a case in which Korean victims sought liquidation of two Japanese firms' assets to provide compensation to them.

The companies, Mitsubishi Heavy Industries and Nippon Steel, have been ordered to provide compensation for forcing Koreans into labor during Japan's occupation of Korea from 1910 to 1945.

But they refused to take liability, restating its government's position that all claims related to its annexation of Korea were settled once and for all by an agreement signed in 1965.

As the Seoul top court has yet to deliver the final ruling on the asset liquidation, the Yoon Suk-yeol administration has been working to find a way to resolve the issue without liquidating the assets, as that would likely see bilateral relations with Japan plunge to its worst level.

Park reportedly spoke about some alternatives to handling the court's ruling, including having a third party assume the Japanese firm's liability. A third party, such as a civic foundation, can create a new debt contract with the creditors, or the Korean victims in this case. Donations can be collected from companies and people of both countries, which would be used toward a compensation fund for the victims.

Aside from the financial compensation, the victim group has demanded a sincere apology from the companies. The Korean government has a tough task of negotiating with the Japanese government to draw a reaction that would satisfy the victims' demands.

Monday's talks is the fourth the two ministers have had since Park came into office in May. They first held an in-person meeting in July, on the sidelines of the G-20 Foreign Ministers' Meeting in Bali, Indonesia. Park traveled to Tokyo later in the same month to hold the second bilateral talks with Hayashi, and then the third was in Cambodia.