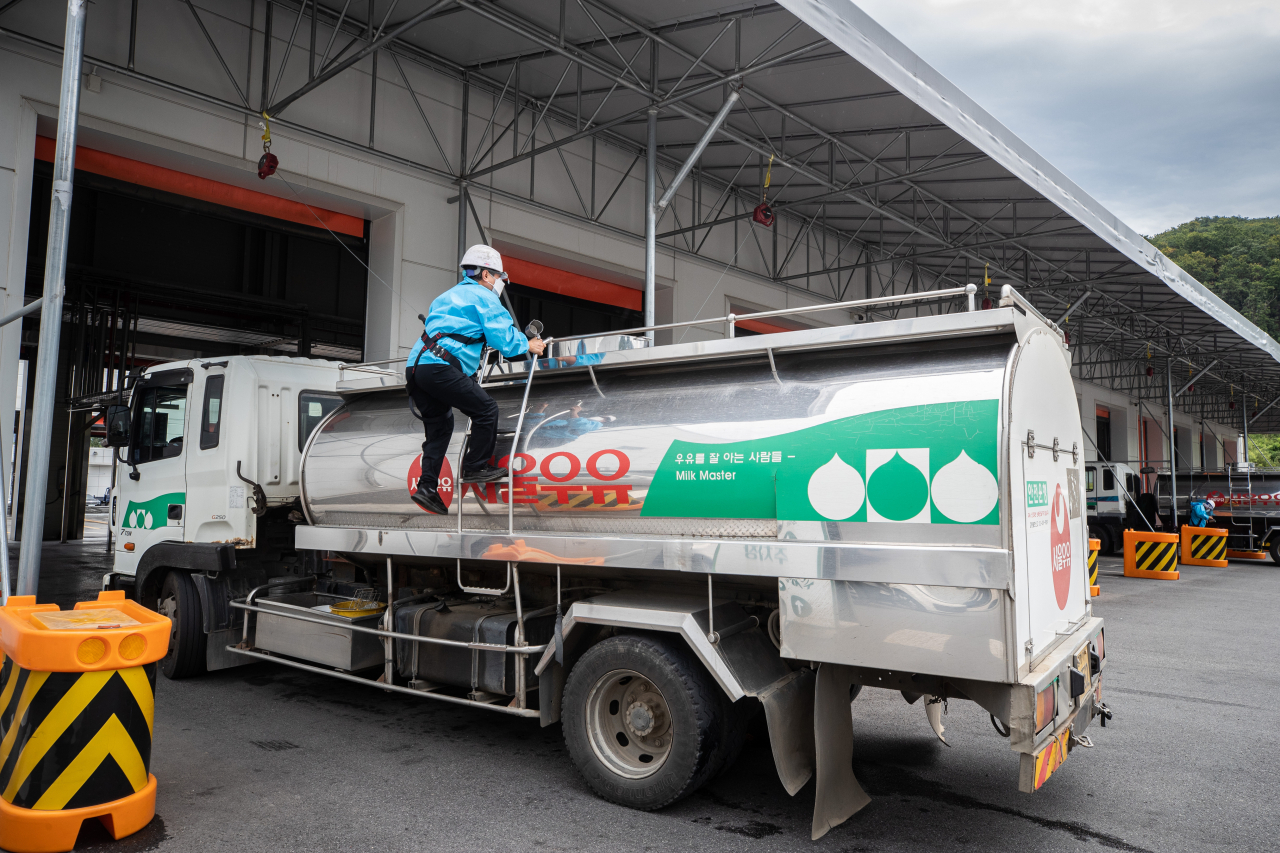 A Seoul Milk employee takes a sample from a milk tanker in front of a warehouse in Yangju, Gyeonggi Province, on Sept. 14. (Yonhap)

Dairy product prices are likely to go up again as the price of locally produced milk is expected to increase as much as 500 won ($0.36) per liter, industry sources said Tuesday.

Korea Dairy Committee, a private organization that oversees fair distribution of raw milk, carried out the first meeting between dairy farmers and dairy companies on Tuesday to negotiate the price of raw milk for this year.

Dairy farmers argued they should raise the price of 1 liter of raw milk by 47-58 won since the fodder cost for cows surged 40 percent, and as other production costs climbed too.

With milk becoming more expensive, it will likely bring up the price of bread, ice cream and coffee, as well as butter, cheese, cream and other dairy products, worsening the already rising inflation, sources said.

As of August, the price of processed food has surged on-year by 8.4 percent, surpassing the overall inflation rate, data from Korea Statistics showed.

The government vowed on Monday it will try to cap the price increase of milk.

“We cannot give direct orders to dairy companies regarding price. But we are planning to ask them not to increase the price of milk, ingredients for other food products, as much as possible,” said Park Beom-su, assistant secretary of the Ministry of Agriculture, Food and Rural Affairs, during a briefing on Monday.

Park stressed that the price consumers pay for milk does not always jump tenfold compared to raw milk, citing a previous instance when milk prices increased just as much as that of raw milk.

But dairy companies are arguing the price hike of milk on the market is inevitable.

“We acknowledge that rising food costs is already pushing inflation higher. Nonetheless, the industry has to increase the consumer price for milk, following the rising price of raw milk, to compensate for the cost,” said an official from a dairy company who requested anonymity.

In the long run, the price increase of milk might hurt the competitive edge of domestic dairy companies, sources said.

Starting from 2026, South Korea will impose zero tariffs on milk imported from the US and Europe. The current tariff rate for US and EU countries are 9.6 percent and 9 percent, respectively.

Even before the tariff waiver, the list of 10 top-selling sterilized milk within the country included milk brands from Poland and Germany -- but not Korea -- as of Monday, according to online tracking firm Danawa.