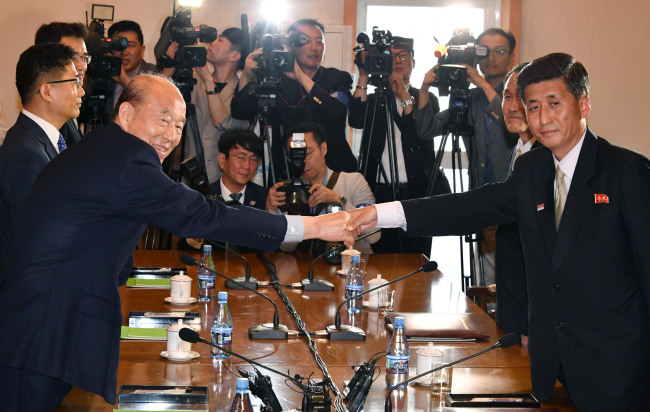 The two Koreas hold Red Cross talks on June 22, 2018, at the Kumgangsan resort in North Korea. Park Kyung-seo (left), head of the Korean Red Cross headed the South Korean delegation, while Pak Yong-il (right), vice chairman of the Committee for the Peaceful Reunification of the Country (second from left), led the North Korean team. (JointPress Corps)

Pak Yong-il, a senior member of North Korea's parliament known for his role in inter-Korean exchanges, has died, according to Pyongyang's state media Tuesday.

"Pak Yong-il devoted himself to the struggle for the prosperity and development of our state and the independent reunification of the country with ardent patriotism," the KCNA said.

He previously served as vice chairman of the Committee for the Peaceful Reunification of the Country handling inter-Korean affairs and took part in the Korean Red Cross negotiations with Seoul in 2009 and 2010.

As Pyongyang's chief delegate, Pak led the working-level Red Cross talks from 2013 to 2015 on the issue of holding reunions for families separated during the 1950-53 Korean War.

In June 2018, he also attended high-level talks at the truce village of Panmunjom to discuss steps to implement agreements reached during a April 27 summit between Kim and then South Korean President Moon Jae-in. (Yonhap)