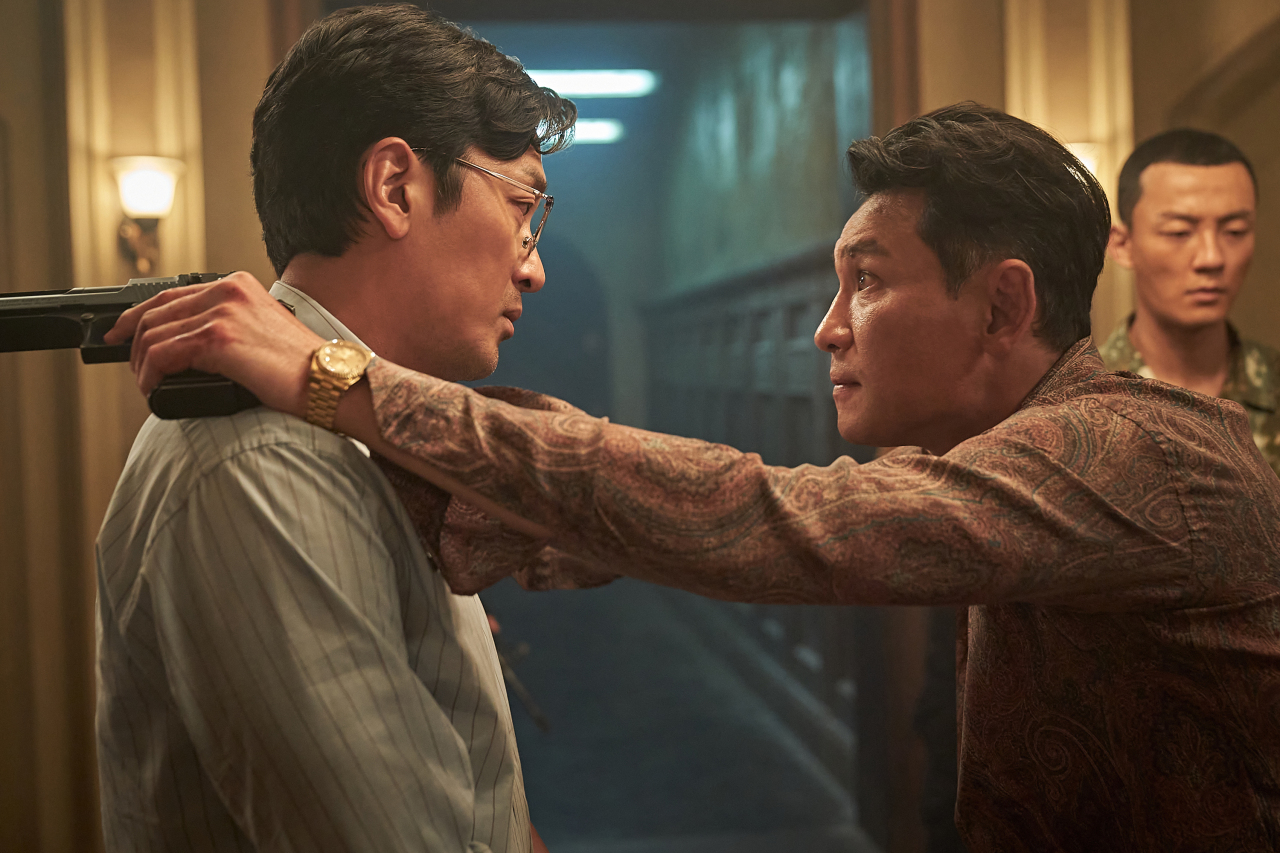 Ha Jung-woo (left) stars as Kang In-gu and Hwang Jung-min as Jeon Yohan in Netflix's "Narco-Saints." (Netflix)
Korean dramas have long had a thing for making viewers chuckle while drawing them into a vortex of suspense, mystery and drama.

Be it romance, legal drama or crime thriller, a good share of K-shows never lose their touch when it comes to humor and bringing out the charming side of its main characters, often banking on brilliant actors to deliver light relief while driving a serious plot.

The show also has the elements of a compelling story -- it’s based on real people and real events, and it’s about an ordinary person somehow doing extraordinary things.

Protagonist Kang In-gu, an auto mechanic by day, a karaoke bar waiter-turned-owner by night and a devoted father, wanted to make more money for his family.

He follows his friend to the other side of the world, to Suriname, to buy skate, which is discarded in the South American country but is a delicacy in Korea.

He finds himself in a Surinamese jail, however, after cocaine is found inside the fish that he ships. A Korean intelligence agent visits him in prison, asking him to work with them to nab the Korean drug lord who put cocaine in his fish. Kang accepts the proposal.

What is most intriguing is how willingly Kang takes risks outside the NIS’ plans to achieve his objectives. As he learns how heinous his target is, he doubles down as if he had been waiting all his life to become a professional undercover agent, demonstrating the calculated audacity of a businessman.

“K,” the real-life civilian on whom Kang is based, was as daring if not more, according to media interviews of the show’s producers and an investigator who was on the actual case.

Kang, played by Ha Jung-woo, one of the best South Korean actors of his generation, is not afraid of getting beaten up by gangs, whether Korean or Chinese.

But in one scene, when the villain’s henchman tries to stop him, the former judoka throws him down on a whim, expressing his irritation, to his target’s amusement.

For Ha Jung-woo fans, it is a joy to watch him play Kang, who plays his role in the operation as smoothly as Ha the actor himself.

His skills aside, Kang epitomizes the typical Korean parent who will do anything for his children’s education.

In the midst of a gripping crime thriller plotline, Kang’s aims -- supporting his family while bringing the devilish pastor-in-disguise to justice -- allow viewers to easily empathize with and even cheer for him. The second motive gradually strengthens, especially after he witnesses that the smuggling ring drugged even children.

Hwang Jung-min, who plays “the pastor,” proves once again that he is one of the best around for playing an evil role. Wearing makeup that makes his skin look filthy and diabolic, he is almost charming when he quips “you’re possessed by satan” to anyone who says anything he doesn’t like.

The real-life criminal figure on which the character is based, Cho Bong-haeng, was sentenced to 10 years in jail in 2011, and died five years later in hospital after he was temporarily released from prison for medical treatment.

Cho, claiming to know the Surinamese president personally, as does the pastor in the film, tricked troubled housewives and students into smuggling cocaine by telling them they would be transporting gemstones. However, he did not pose as a pastor or kill people, according to a former prosecutor who handled the case 11 years ago.

“Squid Game” star Park Hae-soo plays the NIS agent who elegantly plays his colorful part in the mission. Another highly talented actor, Jo Woo-jin, plays a Chinese gang member who defected to the pastor’s gang to be his right-hand man.

Taiwanese actor Chang Chen plays the ruthless Chinese gang leader who chops off a traitor’s hands and feet, and hangs the corpse at the gate of Chinatown. The rivalry between Korean and Chinese criminal crime rings gives more color to the show.

The show does have its limits, however, owing mostly to its director Yoon Jong-bin’s interests that are all too evident in his filmography -- male-dominant action full of machismo and profanity -- and disregard for female characters. The two or three women with lines in “Narco-Saints” are nothing more than tools in the story.

The show has caused a stir in Suriname, with its foreign minister threatening legal action against the producers last week for depicting Suriname as a corrupt country associated with cocaine.

“Narco-Saints” became the third most watched Netflix show worldwide just five days after its release on Sept. 9, and has maintained that spot since.