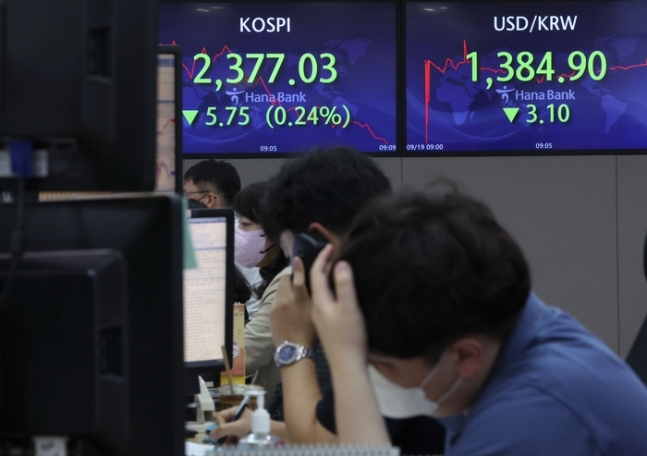 An electronic screen at the Hana Bank`s dealing room in central Seoul shows the won-dollar currency exchange rate on Monday (Yonhap)
The sharply weakening value of the Korean currency has raised alarms among onlookers in recent weeks as it could lead to higher trade deficit, taking a toll on the nation’s economy, sources said Monday.

The Korean won was trading at 1,391.9 won against the US dollar around 2 p.m. on Monday, inching toward the symbolic 1,400 won-mark that had been only surpassed during past financial crises. The local currency fell below 1,400 won against the US greenback in December 1997 and November 2008 and continued to remain below the mark in the following months, stalling Korea’s economic growth for some time.

While the weakening won is unlikely to lead to another financial crisis, it could still create waves that could increase the nation’s trade deficit. A trade deficit occurs when the value of a country's imports exceeds the value of its exports and for a country that heavily relies on its outbound shipments, it could mean trouble.

“South Korea is currently trapped in a vicious cycle of rate hikes, rising trade deficits and the falling value of the won,” Kim Hyo-jin, a researcher at KB Securities, said.

“The trade deficit has been leading to the weakening won, which has been creating hurdles for Korea’s imports, which in turn contributes to higher trade deficit,” she added.

According to latest data from the Bank of Korea, the nation’s August trade deficit came to $9.47 billion, the highest since 1956 when the government began to collect such data. The January-August deficit of $24.7 billion has already surpassed the yearly high set in 1996. Higher prices of energy and petroleum products accounted for 78 percent of this year’s trade deficit so far, according to the central bank.

Noting the won’s sharply weakening value, authorities recently shifted their previous stance of downplaying the associated risks toward adopting more hard-line measures that could cushion the economy from possible blows.

On top of it, President Yoon Suk-yeol is expected to discuss the possibility of a new Korea-US currency swap deal with US President Joe Biden when they meet on the sidelines of the UN General Assembly in New York later this week.

“Since it is a topic of common interest, a discussion is expected to take place naturally,” Choi Sang-mok, senior presidential secretary for economic affairs told reporters on Friday, referring to the currency swap deal.

The first Korea-US currency swap deal worth $30 billion was signed in October 2008 and remained effective until February 2010. Analysts lauded the monetary partnership saying that it played a crucial part in alleviating the risks of the 2008 global financial crisis on Asia’s fourth-largest economy. It had helped bring the won-dollar exchange rate back down to 1,170 won per dollar in February 2010 from 1,468 won per dollar in October 2008, according to the Bank of Korea.

Korea’s latest currency swap deal was signed in March 2020 and remained in place until December last year. It was worth $60 billion.

Experts worry that the won’s latest retreat is surrounded by “more complicated” risks compared with the similar events in the past.

“There were no big events that posed as risks, the won is falling to 1,400 won, dragged down by the possibilities of the US Federal Reserve’s interest rates surpassing South Korea’s base rate and higher trade deficits,” Yang Jun-sok, an economics professor at the Catholic University of Korea said.

“The currency swap deal with the US could quell investor sentiment as the rate difference between Korea and the US widens,” he added.