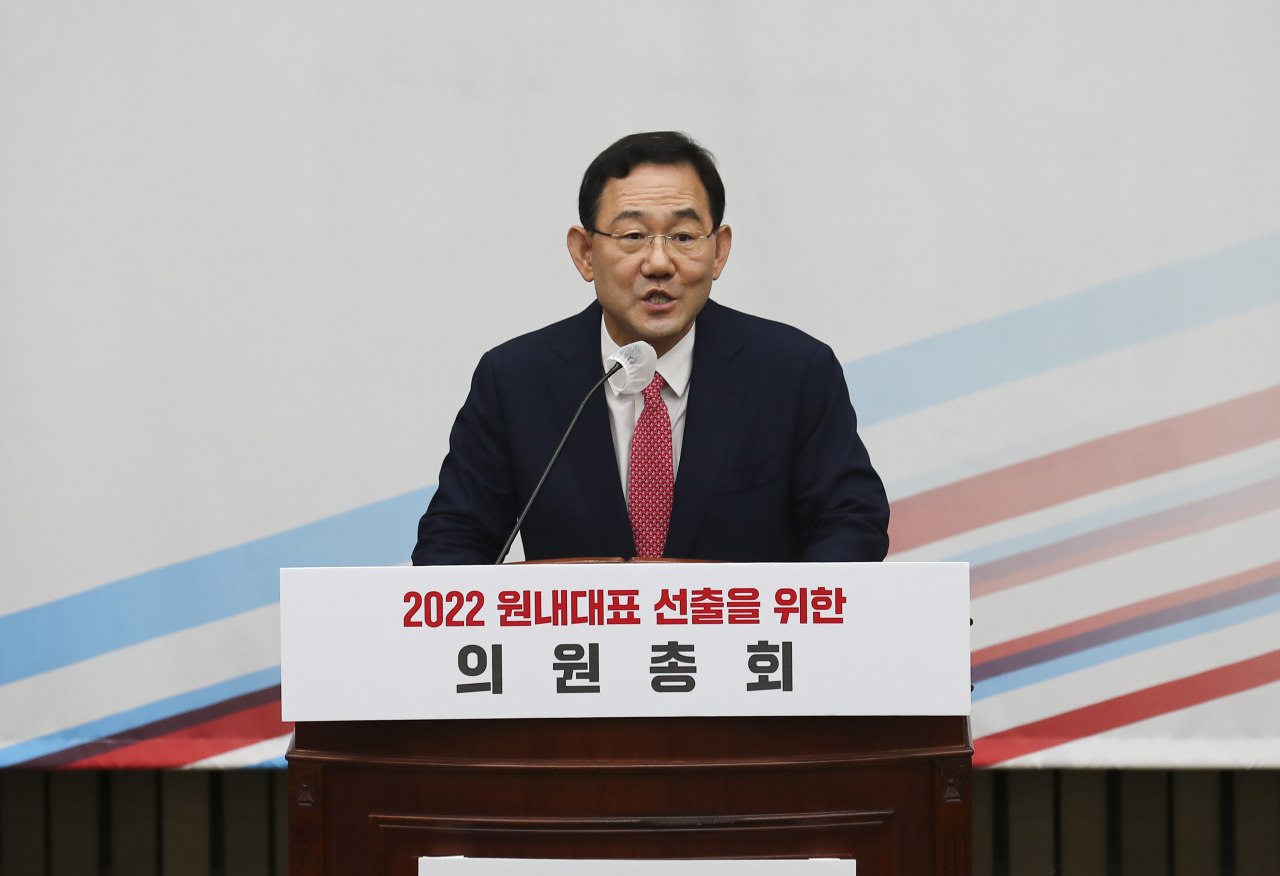 Joo is a five-term lawmaker who previously served as the party's floor leader in 2020. He won 61 out of 106 votes in a party floor leadership election held Monday, running against second-term lawmaker Rep. Lee Yong-ho, who earned 42 votes.

“I thank those who were concerned and those who helped,” Joo said after being elected as the party floor leader. “We can find the best solutions when multiple people gather to discuss.”

The new floor leader’s term will end in April 2023. Though the party charter states a floor leader can serve a yearlong term, Joo said he will only take over the post until the end of the leftover term of former party floor leader Kwon Sung-dong.

A few hours before Joo was elected party floor leader, Lee stated that he filed his injunction request in order to defend himself.

"It is impossible to launch a preemptive attack with an injunction," Lee wrote on social media.

"Filing for an injunction was an act to defend myself against illogical acts," he said, referring to the disciplinary suspension given by the party's ethics committee over allegations related to a 2015 sexual bribery scandal.

Meanwhile, the National Assembly has kicked off its interpellation session on Monday. The parties focused on “politics” on the first day.

The main opposition Democratic Party of Korea attacked Yoon’s administration for the now-cancelled construction plan of a new state guesthouse which was mired in controversy few days ago.

Prime Minister Han Duck-soo said he was not aware about the 87.8 billion won ($63 million) project budget, and that he did not discuss the matter with the president.

“It would have been difficult to hold major governmental or presidential events at Cheong Wa Dae (where Yeongbingwan is located), as it is widely accessible by the public,” he said.

“The new state guesthouse would have been a state facility used by not just the president, but also ministers, prime minister and related officials,” Han said.

Han responded it would be the responsibility of the prosecution and authorities to investigate the allegations.

The government and the ruling party refuted against the main opposition party’s attacks, denouncing the policies from the past Moon Jae-in administration.

Han said the government will call for an investigation on the alleged corruption in the spending of government funds regarding solar energy projects under the previous Moon Jae-in administration.

The four-day long interpellation session will run until Thursday, focusing on diplomacy, North Korea and defense on Tuesday, economics on Wednesday and education, social affairs and culture on Thursday.