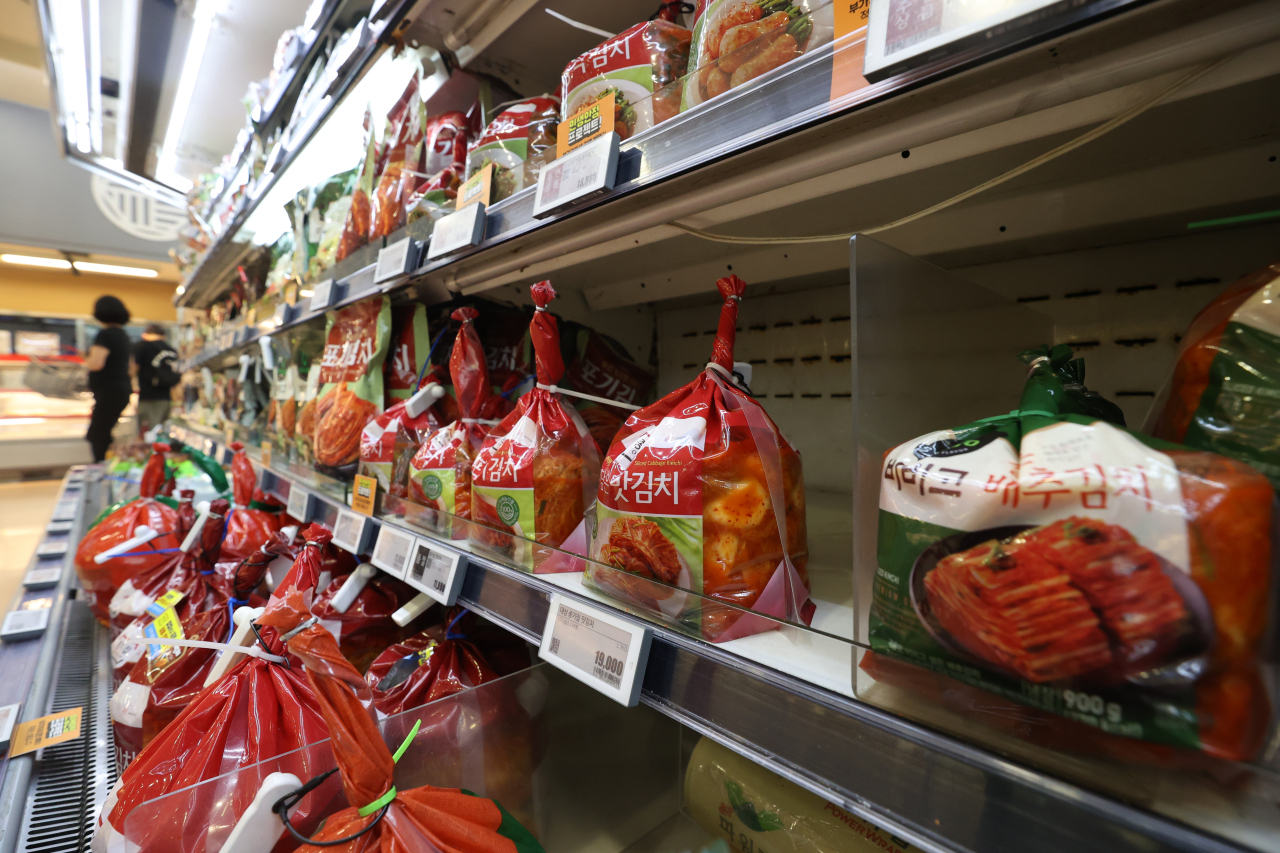 Packs of kimchi displayed in a supermarket cabinet in Seoul (Yonhap)
South Korean households are feeling the inflation pinch as they brace for the annual kimchi-making season later this year.

The price of 20 kg of white radish, which are fermented in spicy sauce and other flavorful seasoning, skyrocketed by 146.1 percent to 28,460 won in the cited period.

Food inflation shows no sign of abating ahead of the annual "gimjang," or kimchi-making season, that usually takes place from November to December.

The communal act of making and sharing kimchi among family and neighbors is considered a cultural heritage that was developed to prepare for a long, cold winter.

Even though more people now prefer to purchase kimchi rather than make it themselves, kimchi remains a staple food for Koreans.

A white-collar employee surnamed Park said, “I heard the cabbage price is through the roof despite its low quality. I don’t know if I can make sufficient amount of kimchi this year with my in-laws.”

The situation is no different for those who opt to buy kimchi. Some of the supermarkets are seeing their stocks of kimchi cut in half compared to last year.

“Sweltering heat waves and record-breaking rainstorms during summer hindered the growth of crops including cabbage and white radish, resulting in a supply glitch and the rising price of kimchi,” said a supermarket chain official who requested anonymity.

Some people have called the ready-made kimchi being sold at supermarkets "geumchi," a tongue-in-cheek term that suggests the kimchi is as expensive as gold.

Daesang, the country’s leading kimchi maker, will increase the average price of its Jongga kimchi by 9.8 percent from Oct. 1. The price of 3.7 kg of packed kimchi will jump from approximately 34,700 won to 38,100 won. Food giant CJ CheilJedang has raised its Bibigo kimchi price by 11 percent to around 34,800 won since Sept. 15.

The government vowed on Monday to ease the supply crunch and keep the lid on kimchi prices for the upcoming gimjang season.

“We plan to move up the shipment date for cabbages grown by the government and for import cabbages that are originally used to make kimchi for export,” said Finance Minister Choo Kyung-ho during a consumer price review meeting. “Noting that the gimjang season starts from early November, the government will come up with measures to stabilize the supply and demand of kimchi vegetables by October.”

Choo added that the Ministry of Agriculture, Food and Rural Affairs will set up a task force to monitor price increases by food companies and carry out a joint inspection with the Fair Trade Commission to oversee any unfair price hikes.