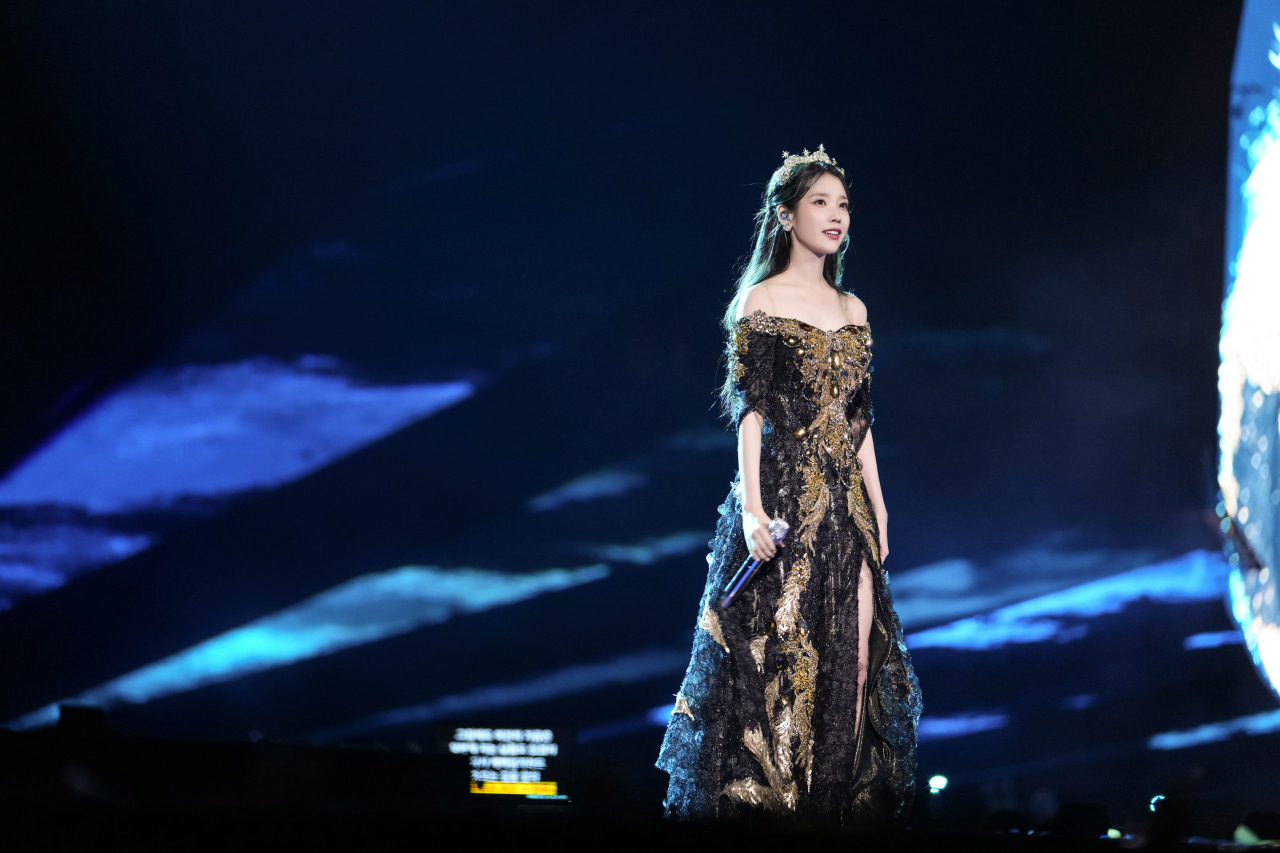 While all IU concerts are special, “The Golden Hour” was historic in another sense, as it marked her debut at Olympic Stadium, one of the nation’s biggest and most-coveted concert venues. The 30-year-old has done that as the first Korean female soloist. It also marked her first offline gig in three years, since “Love, Poem” in 2019.

As the night opened with “Eight,” IU appeared on the stage clad head-to-toe in white. She performed “Celebrity” and danced around the stage, moving to the thrust platform that extended into the floor seats.

“It’s a little bit hotter than yesterday, but fortunately, the sky was prettier today. I wanted to sing ‘Eight’ with the sunset. It was something I had planned for a long time,” she said. "I’m happy that it turned out as pretty as I expected."

IU then kicked into her classics with “dlwlrma,” “Every End of the Day” and “Friday.” During “The Meaning of You,” fans joined in, taking turns with IU.

It was a night of celebration as Sunday marked the 14th anniversary of IU’s debut. On Sept. 18, 2008, IU began her career with her first EP, “Lost and Found.”

With joys came sorrows, as the night bid a farewell to the much-loved “Palette” and “Good Day.”

“I made this song when I was 25 and have sang it until now, cherishing it inside me. But I turned into my 30s (by Korean age), and I want to now leave the song to 25-year-old Jieun,” she said about “Palette,” adding the song will not be included in future official concert set lists.

“Good Day” brought IU her first commercial breakout in 2010 and has continued to represent the singer for a long time, and she said she is now putting the song behind her to bring some fresher tunes into the rotation.

Plenty of visual surprises, from fireworks to drone shows, were in store. During “Strawberry Moon,” IU appeared on a pink hot-air balloon shaped stage and traveled around the stadium, getting closer to the audience in the upper floors.

After IU ramped up the night with, “Blueming,” “Hold My Hand” and “Last Night Story,” the night’s special guest, Jay Park, came to the stage. Along with the dance team Holy Bang, the rapper performed a duet of “Ganadara” with IU.

“Although she’s much younger, IU is an artist I truly respect,” he said. “She’s stayed at the top for 14 years, pulling off everything perfectly, from her albums to acting and even the concerts, It’s more amazing for me as, as a fellow musician, I know how much hard work and effort it takes to do that.”

IU toned down the mood and removed herself of the glistening glamour in the third part of the night. As she began crooning the lyrics of “Knees,” the hall dimmed. A roar of applause burst from the crowd after the song ended. She continued unrestrained, straight into “Winter Sleep.”

“'Knees’ is a song that I think defines myself as a musician, and I wanted to sing the song on this stage even though it’s now so well known. ‘Winter Sleep,’ which followed, is a song that I wrote trying to find that emotions I’d felt when I had written ‘Knees.’ The two are like a set for me,” IU explained, adding it was her first time sharing her thoughts about the two songs.

IU went on to softly coo “Night Letter” and “Only I Didn’t Know.”

The night took a majestic turn with “Above the Time,” as a drone show began with the backdrop of roaring orchestral sounds. Drones flew up in unison into the night sky and made a silhouette of IU in “Celebrity.” They then moved around to draw an hourglass, the symbolic shape of “The Golden Hour.”

Ending the official set list with her "You & I,” IU was welcomed back to the stage by fans with “Love, Poem.” It was the first song of her encore, but fans gifted her with their own sing-along. “I will stand by your every step as we are perfect friends of 14 years,” read a placard held up by fans.

Before wrapping up the night with “My Sea,” IU opened up about the uncertainties she had felt as she waited three years to finally hold the concert.

“I really didn’t believe that this moment would come, but it has. I’ve spent the past two months worrying that some issue will come up and it might not happen, so it feels incredible that this moment has finally come,” IU said.

It wasn’t just the pandemic that had troubled her. IU said she has been struggling with hearing issues as well.

“It’s not something serious, but I haven’t been able to control my ear conditions for around a year now,” she began. “Near the end of yesterday’s show, my ears started to worsen in condition, and from last night until the rehearsal today, the past day has been like hell for me.”

“I stepped onto the stage today not knowing what to do, but truly, you guys did everything for today’s show,” she said, thanking fans sincerely.

Debuting as a girl at the age of 15, IU has grown into one of the most loved and respected artists over the past 14 years. What has brought her such big love, from listeners young and old, male and female, is not just her musical talents, but the humbleness that she has maintained. IU again moved many hearts with her words.

“I thought that this show might be my final destination. I had never imagined being on such a big stage,” she said. “Through tonight’s memory, I will not become arrogant and, staying humble, I will keep on reminding myself about those hearts rooting for me. I’ve only come 14 years, so here’s to another 14 years.”