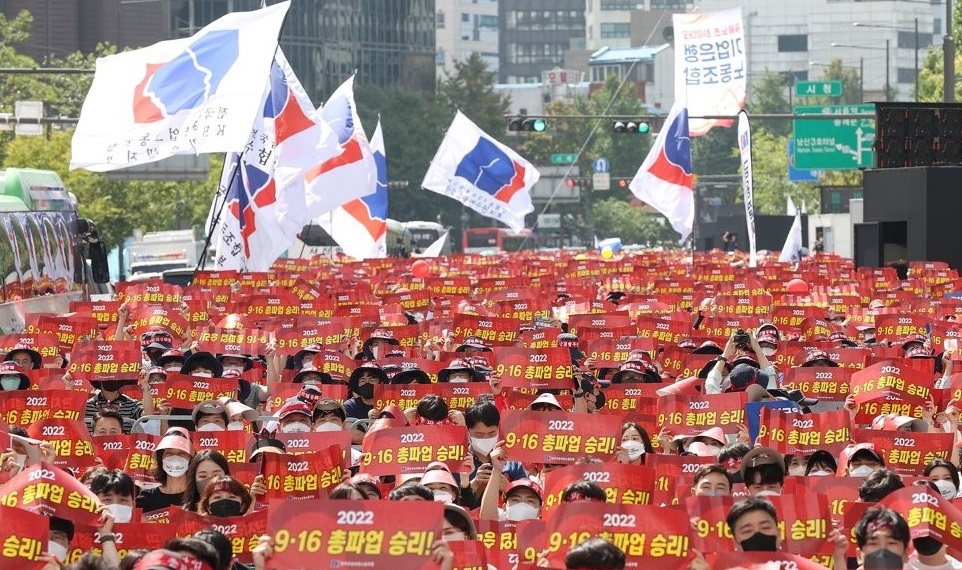 The Korean Financial Industry Union affiliated with the Federation of Korean Trade Unions, one of the country’s two umbrella unions, carried out a one-day general strike and demonstration at Gwanghwamun Square, central Seoul, calling for a 5.2 percent wage hike and the adoption of a 4.5-day workweek pilot program. It marked the first of such nationwide strike since September 2016.

While the demonstration caused heavy traffic jams, the industrial action failed to cause a make a dent in the financial institutions’ operations, according to financial authorities and industry insiders.

“There were no systematic failures detected in all banks here as well as well as no disruptions and damages reported in customer services as of 4 p.m.,” the watchdog Financial Supervisory Service said in a statement Friday.

It also pointed to the lack of participation from the banks’ IT employees at the rally, calling the group a “key workforce necessary” for the operation of the firms’ systems.

“Of the 17 banks that participated in the strike, 8.6 percent or 539 were IT-related employees. We did not find any participation from key workforce necessary in operating the firms’ IT systems at Friday’s rally,” the watchdog added, hinting that the firms’ rapid development of digital and mobile banking services cushioned their operations from possible blows.

Local reports said that only 0.8 percent of the workforce at the top five banks here -- KB Kookmin, Shinhan, Hana, Woori and NongHyup -- participated in the rally. The majority or some 7,000 of the protesters were from state-run institutions including the Korea Development Bank -- where employees have also strongly opposed the government’s move to relocate its headquarters from Seoul to Busan -- and the Industrial Bank of Korea.

“The firm and the unionists’ lack of respect for social responsibilities and solidarity among themselves have led to a polarization in the nation’s labor market,” Labor Minister Lee Jung-sik said at a press conference held the same day as the strike.

“Unionists who are full-time employees or part of a large company are focused on protecting their own existing benefits, instead of creating solidarity with those who are part-time employees or contracted workers.”

According to performance reports released by the top four banks here -- KB Kookmin, Shinhan, Hana and Woori -- in March, their average salary per employee came to 105.5 million won ($76,000) as of end of last year, rising 7.6 percent on-year. KB Kookmin employees earned the most with an average of 112 million won.

IBK employees' average annual salary was some way off this, at some 81 million won, up about 1 percent on year, its recent regulatory filing showed. The corresponding figure for KDB rose 1.9 percent to some 111.9 million won as of end-2020, according to Alio, a state website that releases information on public corporations.

A Statistics Korea data released in December last year showed that the average annual salary of some 20 million South Korean “office workers” came to nearly 38.3 million won as of end-2020. Asia’s fourth-largest economy has a total population of some 50 million.

The FKIU’s rally comes as banks here have been shuttering offline branches and slashing their workforces.

According to the FSS, a total 9,807 unionized workers participated in Friday’s rally, which accounts for 9.4 percent of the entire workforce in the banking sector here. The participation nearly halved from the 2016 rally, when some 18,000 unionists or 21 percent of the total workforce came together.