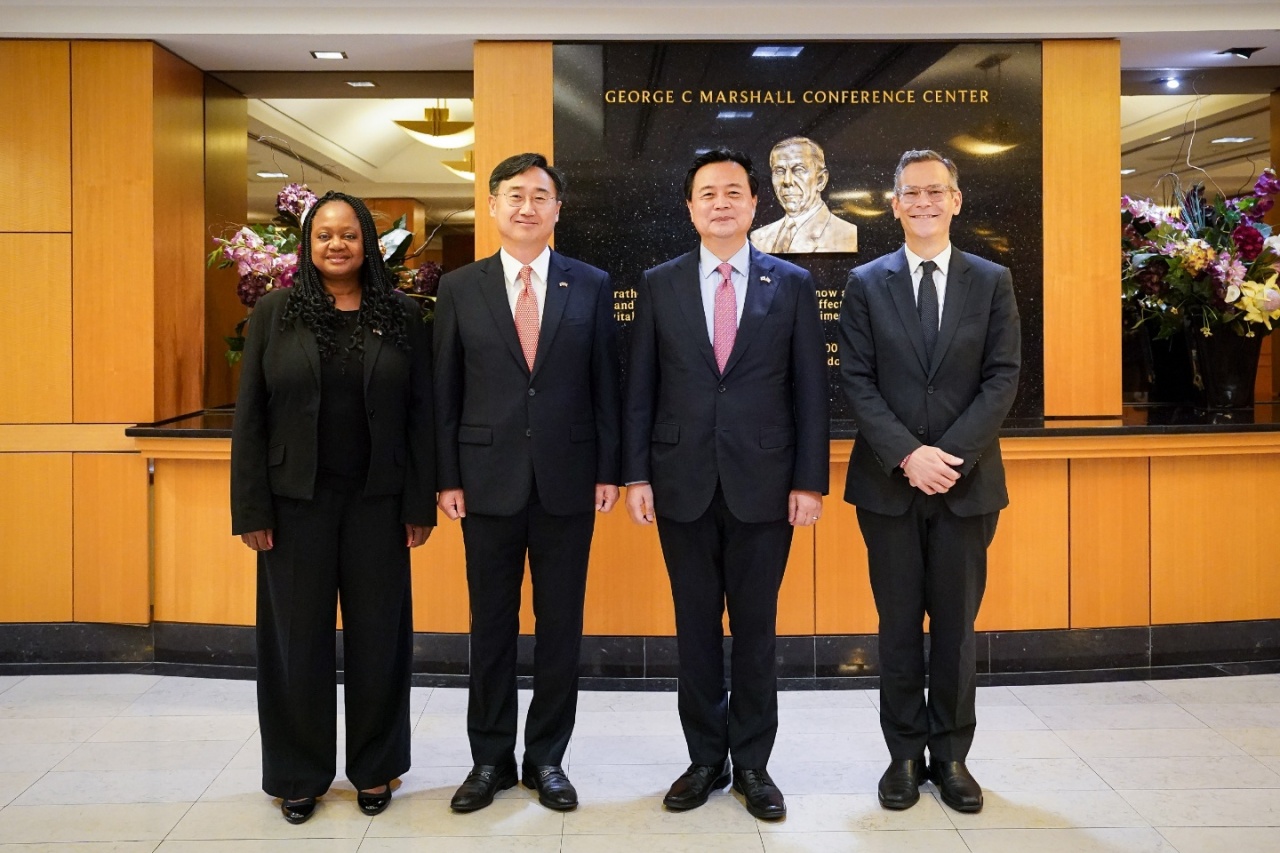 South Korea`s vice defense and foreign ministers - Shin Beom-chul (2nd from L) and Cho Hyun-dong (2nd from R) - pose for a photo with Colin Kahl (R), undersecretary of defense for policy, and Bonnie Jenkins, undersecretary of state for arms control and international security, at a session of the Extended Deterrence Strategy and Consultation Group (EDSCG) in Washington D.C. on Friday. (Ministry of National Defense)
South Korea and the United States warned of an “overwhelming and decisive response” to any nuclear attack by North Korea at high-level strategic talks on Friday, denouncing North Korea’s first-use nuclear doctrine as an “escalatory and destabilizing messaging.”

The two countries held the meeting of the Extended Deterrence Strategy and Consultation Group between South Korean and US vice ministers of foreign affairs and defense on Friday in Washington for the first time since January 2018.

Both sides expressed their “serious concern over the DPRK’s escalatory and destabilizing messaging related to nuclear weapons use, including its adoption of the new nuclear policy law,” the joint statement on the results of the EDSCG meeting said, using the acronym for North Korea’s official name, the Democratic People's Republic of Korea.

North Korea’s rubber-stamp parliament on Sept. 8 passed a new law that legitimizes the possession of nuclear weapons and its nuclear buildup, and which allows a preemptive nuclear strike under certain circumstances.

“The United States and the ROK made clear that any DPRK nuclear attack would be met with an overwhelming and decisive response,” the joint statement said, referring to South Korea’s official name, the Republic of Korea.

South Korea and the US also reaffirmed that North Korea’s “nuclear test would be met with a strong and resolute whole-of-government response.”

“The two countries are closely coordinating in detail and stand ready for all possible scenarios,” the joint statement said without providing further details.

At the high-level dialogue, the US reaffirmed its “ironclad and unwavering commitment” to provide extended deterrence for South Korea by leveraging the full range of its military capabilities, including nuclear, conventional, missile defense, and other advanced non-nuclear capabilities.

Extended deterrence is the US’ commitment to deter or respond to coercion and attacks on US allies and partners. The US nuclear umbrella is one means the US offers to achieve extended deterrence.

Timely, effective deployment of US strategic assets
The US notably committed to strengthen coordination with South Korea to “deploy and exercise strategic assets in the region in a timely and effective manner” to deter and counter North Korea and enhance regional security.

The joint statement referred to the first-ever combined aerial exercise between F-35 stealth fighters from the South Korean and the US air forces in July and the upcoming deployment of the Ronald Reagan Carrier Strike Group on the peninsula as a “clear demonstration of such US commitment.”

The US Navy’s USS Ronald Reagan (CVN-76), a 100,000-metric ton nuclear-powered supercarrier, will enter the port of Busan next week in an apparent show of force against North Korea.

A nuclear-powered aircraft carrier is among the strategic US military assets that are strategically positioned as a show of force to deter provocations by potential adversaries.

Strengthen alliance deterrence, readiness
South Korea and the US also committed to “continue efforts to employ all elements of both countries’ national power to strengthen the Alliance deterrence posture” at the EDSCG meeting, according to the joint statement.

As part of efforts, the two countries will “continue to explore avenues to enhance Alliance strategic readiness through improved information sharing, training, and exercises” related to nuclear and non-nuclear threats.

The better use of table-top exercises, or TTXs, on the use of deterrence assets and deployment of US strategic military assets, was cited as an example. The TTXs allow South Korea and the US to practice joint military responses in simulated contingency scenarios, including North Korean nuclear threats and use of nuclear weapons.

Furthermore, Seoul and Washington pledged to “improve coordination and strengthen the Alliance’s missile response capabilities and posture, and continuing cooperation in the space and cyber arenas, to include through expanded multi-domain exercises.”

During the talks, both sides also agreed to hold an EDSCG meeting annually. The working-level talks will be held during the first half of 2023 to prepare for the next high-level EDSCG meeting.

South Korea and the US resumed the EDSCG meetings at a critical juncture after a near five-year hiatus. After Seoul and Washington agreed to establish the EDSCG in October 2016, only two meetings were held in December 2016 and January 2018.

But South Korean President Yoon Suk-yeol and US President Joe Biden agreed to reactivate the EDSCG at the earliest date at the May 21 summit amid escalating missile and nuclear threats by North Korea. The EDSCG meeting on Friday is a follow-up measure to the commitment launched by Yoon and Biden.

Vice Defense Minister Shin Beom-chul and First Vice Foreign Minister Cho Hyun-dong represented the South Korean side during the EDSCG meeting. The US delegation was led by Ambassador Bonnie Jenkins, the undersecretary of state for arms control and international security, and Dr. Colin Kahl, the undersecretary of defense for policy.

During his trip to the US this week, Shin visited Joint Base Andrews and the US Missile Defense Agency and US Cyber Command outside Washington.

Shin toured nuclear-capable B-52 strategic bombers at Joint Base Andrews on Thursday, South Korea’s Defense Ministry said. Shin was also “briefed on the capabilities and operation systems of US strategic assets which are be deployed on the Korean Peninsula in case of contingencies,” according to the ministry.

South Korea and the US “assessed that the third EDSCG, including a delegation tour of a B-52 strategic bomber, contributed substantively to strengthening Alliance deterrence, as well as enhanced shared understanding and effectiveness of US extended deterrence,” the allies’ joint statement read.