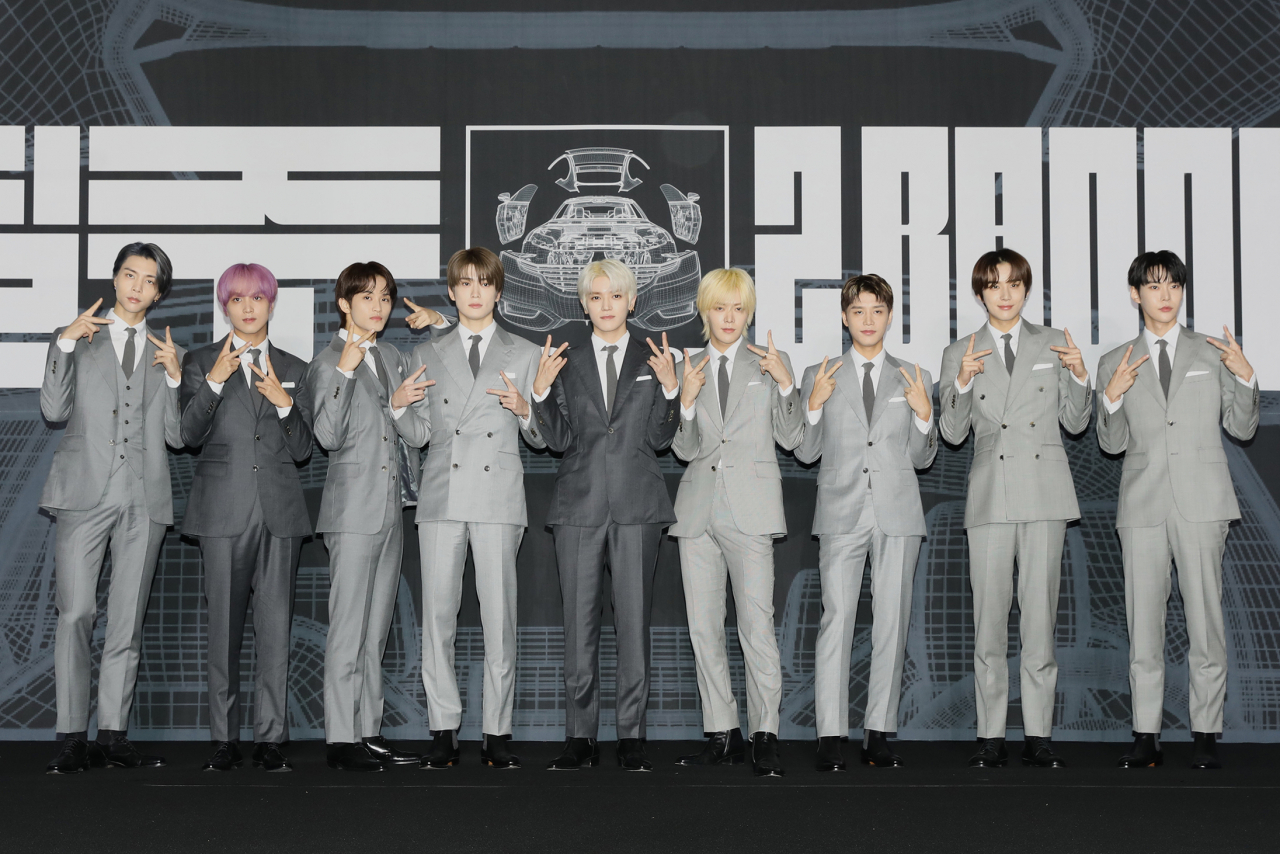 NCT127 poses for pictures at a press conference for its fourth LP, "2 Baddies," in Seoul on Friday. (SM Entertainment)

NCT127 dropped its fourth full-length album “2 Baddies” on Friday, returning to the music scene after almost a year.

Decked out in bright silver suits, the members of NCT127 appeared Friday morning at a press conference in Seoul just a few hours ahead of the album's release at 1 p.m. that day.

This marks some 11 months since NCT127 dropped its third repackaged full-length album, “Favorite,” in October 2021.

“We devoted ourselves to making a masterpiece with this album from the very start of the production. We prepared the album, making each song with all our heart, and we believe we turned it into a masterpiece of our own,” Doyoung said to begin the press event Friday.

Explaining why he believed “2 Baddies” was a masterpiece, Doyoung said, “As we release one full-length album every year, we believed that the mindset we have as we begin the production is important.”

He added, “From the first song recording to collecting each one of the tracks, we took each of the steps very cautiously, and we wanted to embody our genuine heart in the album. As we listened to the whole album at our last monitoring session, every song sounded great and we were satisfied with the album and its tracks, so we labeled it a ‘masterpiece.’”

The LP consists of 12 new songs, including the eponymous “2 Baddies.”

A hip-hop dance anthem of the band’s signature synth sounds mixed with the nine bandmates’ powerful vocals, the song conveys a message that only those who race forward with their own guts can succeed. The Korean title of the song can be translated as “Race.”

During Friday’s media event, the act played the title track and four other: “Faster,” “Time Lapse,” in which Taeyong and and Mark took part in writing the lyrics, “Crash Landing,” composed by star songwriter Kenzie, and the album’s final track, “1, 2, 7.”

The band said “1, 2, 7” is a fan song devoted to the group's global fandom, known as NCTizens.

“It’s a pop genre that sings through the lyrics how it feels like the time has stopped when we are with our lovers. The title symbolizes our name, NCT127, and we included the song on this album thinking of our fans,” Taeil said.

“We hope to sing the song during our concerts later," Jungwoo added.

Meanwhile, the band’s label SM Entertainment unveiled the music video for “2 Baddies” on Thursday, a day ahead of the album’s official release.

“Speaking about how I felt, this song ‘2 Baddies’ is just ‘NCT127’ in itself. As you can see from the music video, it’s very ‘neo’ and the mischievous concept, mingled with the images of each member, really put the song’s performance on display,” Taeyong said.

"Neo" is a term that group uses itself to describe a futuristic concept.

“Since our debut, we took up concepts that even we found difficult to understand. There was a time when we would worry, thinking, ‘Is this really OK?’ as we looked at each other’s clothes and makeup. But I think we’ve turned that neo-tic concept into our own style. It’s not something strange or weird, but I think to be ‘neo’ means to ‘stand out.’ Being ‘neo’ means we’re outstanding,” Taeyong said.

Elaborating on the new performance, Jaehyun added, “If we’d planned our performances very tightly before, this time, there was more space for us to unfold that mischievous concept like a coherent story, and it will be fun to watch.”

After watching the performance video of “2 Baddies” for the first time during the press conference Friday, Taeyong said, “I feel this warmth spread inside me when I watch our stages. Every member is so talented that it makes me think, ‘Yes, this is my team.’”

They seemed especially prouder this time, as the bandmates pushed themselves in training for the performances, with Johnny taking the lead on the extra work.

“Our official training usually ended at around 11 p.m. every day, and I told the members that we should practice once more by ourselves, and I think it’s paid off,” Johnny said. 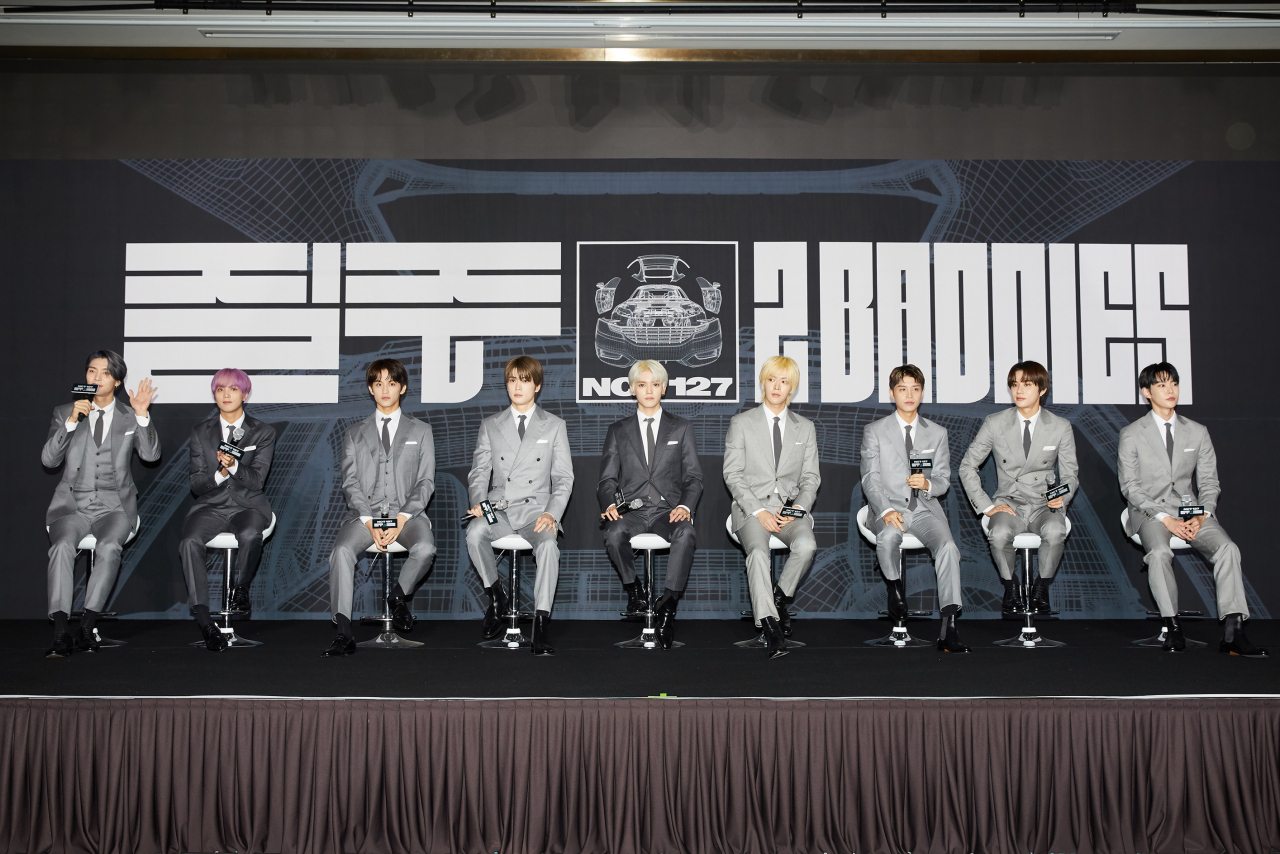 The members of NCT127 answer questions at a press conference for "2 Baddies" in Seoul on Friday. (SM Entertainment)

With their return, the act is set to meet fans at a concert for the first time in South Korea. At 8 p.m. on Friday, NCT127 will hold a showcase with capacity for 10,000 people in Ilsan, Gyeonggi Province, just west of Seoul.

“It’s our first time holding a concert in Korea where we can hear the fans scream. We’re looking forward to everything, from the cheers to the sing-alongs. We’re excited and looking forward to how they’d react to us,” Doyoung said.

The act debuted under SM Entertainment in July 2016 with its first mini album “NCT #127.” It’s a unit group under the umbrella act NCT (Neo Culture Technology), which was produced by SM’s founder and producer Lee Soo-man.

The band has made persistent growth and expanded its global reach with every new effort. When the group's third studio album “Sticker” dropped in September 2021, the band scored a triple-million-seller and stayed on the Billboard 200 main albums chart for the longest consecutive period of any album released that year.

Asked about their chart goals this year, Doyoung said that is not what they have aimed for with “2 Baddies.”

“We know that many fans have waited for a very long time for us, and what we considered the most in making this album was that it could be rewarding to those fans who waited for us,” he said. “Although the scores of the previous album and this one are also important, we want more than anything for our fans to think ‘this is why I waited for NCT127’ after hearing the album.”

But questions continued unabated as to their anticipations for the Billboard charts.

Johnny answered, “In the end, we also aim for No. 1 on the Billboard. We’re always trying our best for that No. 1 goal. I think it’s important we have a certain amount of -- let’s put it like this -- ‘competitive spirit’ (said in English). So, yes, our goal is No. 1 this time as well.”

Just a day ahead of NCT127’s return, SM on Thursday released a statement that it is currently mulling terminating its producing contract with Lee’s personal corporation, Like Planning, upon the official request of the company. Lee has been extending his influence on the K-pop powerhouse as a producer through Like Planning.

“We have asked producer Lee, who has consistently requested an early termination of the contract for the past several years, that he remains with the company until the predebut teams and other acts who have their debuts coming up soon settle into their right track, as those teams are in need of thorough preparations,” SM said in an additional statement released Friday morning.

“In regards, the company plans to discuss the matter deeply with the related parties of interest and announce our decision in the coming days. We will continue our efforts to persist in our growth as the leading company of the K-pop culture and industry,” SM said in the statement.

NCT127’s latest album was also produced by Lee, and Taeyong, the group’s leader, expressed regret on Lee’s possible departure from the label.

“As I have always been with teacher Lee since I first joined SM as a trainee, I cannot imagine SM without him,” Taeyong said, pausing for a while before he continued. “He has expressed so much love for ‘2 Baddies,’ and I just hope that this album does not become teacher Lee’s last production for us.” 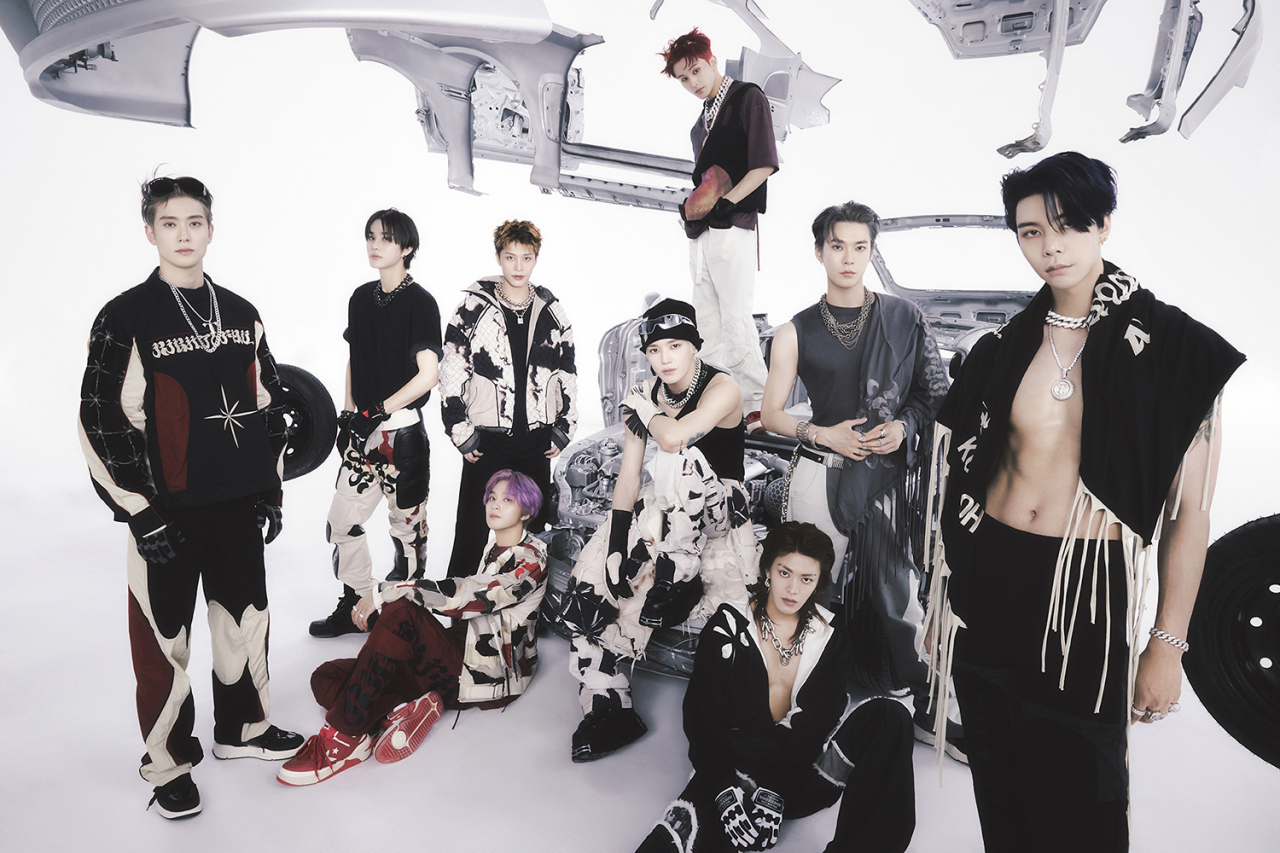 Seven years into their career, NCT127 seems more relaxed and ready than ever, and the bandmates seemed to feel the same about themselves.

"I've always been afraid and tense at press cons before, but today I'm here more firm. We came across '2 Baddies' and honed ourselves hard. Now we feel ready. Rather than saying anything, we'll show it through our performances,” Yuta, the band’s Japanese member, said.

Mark added, "These days, I often feel that the members have all grown into artists of their own colors. Not just in terms of the styling or the gestures on stage, but we know how to make ourselves stand out and show our unique charms, and, in that aspect, we’re also able to voice our own opinions more strongly than before.”

Several times throughout Friday’s event, Taeyong seemed to be touched by how far the group has come.

“I think our team has gone through so many things. We’re a team with many stories, and we’ve come this far by trying so hard,” he said. “When we debuted as NCT127, everything was new for us and we went through so many trials and errors. We share so many memories and have all become very close with each other. This is how we were able to release this fourth LP.”

NCT127 has been on its “The Link” world tour since last December, and the band is set to travel to the US next month to continue the series.

“We’re going to America after over two years, so we’re working hard to present something new. We hope NCTizens look forward to it,” Johnny, who is Korean American, said, adding the group would visit Los Angeles and New Jersey during the trip.

"With every album, our ambition was 'to have fun.' Not just on the stage, but when we are by ourselves as well. We have to have fun first for the fans to enjoy with us,” Taeyong said. “Racing until this point with that thought in mind has brought us to be loved by so many fans that we’re now dropping the fourth LP. We’ll continue to have fun together.”