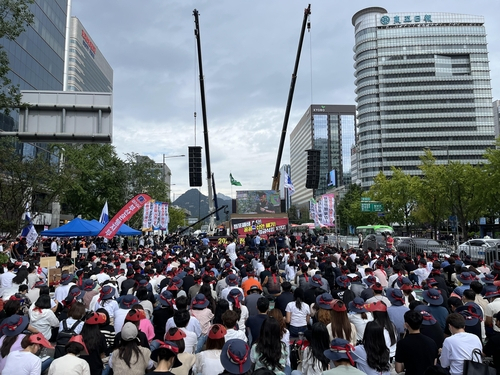 The strike, called by the Korean Financial Industry Union, caused minimal disruption to operations of five major commercial banks, including KB Kookmin and Shinhan, with about 1 percent of union members participating, according to the companies.

In three major state-run banks, including Korea Development Bank, which are scheduled or rumored to relocate to provincial cities, 50 to 70 percent of unionized workers joined the walkout. But they also avoided disruptions, with essential staff members working normally, company officials said.

The KFIU, affiliated with the Federation of Korean Trade Unions, one of the country's two umbrella unions, covers South Korea's mainstream private and state banks and other financial institutions.

In its first strike in six years, the group demanded a 5.2 percent wage hike, the pilot implementation of a 4.5-day workweek and other benefits.

The union said it will launch another single-day strike on Sept. 30.

As part of the strike, some 13,000 members of the KFIU held a large-scale rally at Gwanghwamun Square in central Seoul, on Friday morning.

"We should safeguard the common good of financial services against employers who are dying to reduce the number of stores and employees, and increase dividends to stockholders," Park Hong-bae, KFIU chairman, said during the rally.

The strikers marched toward the presidential office in Yongsan following the rally.

The morning demonstration caused heavy traffic jams around Gwanghwamun Square, slowing down the traveling speed of vehicles around the area to as low as 12 kph as of 10 a.m. (Yonhap)