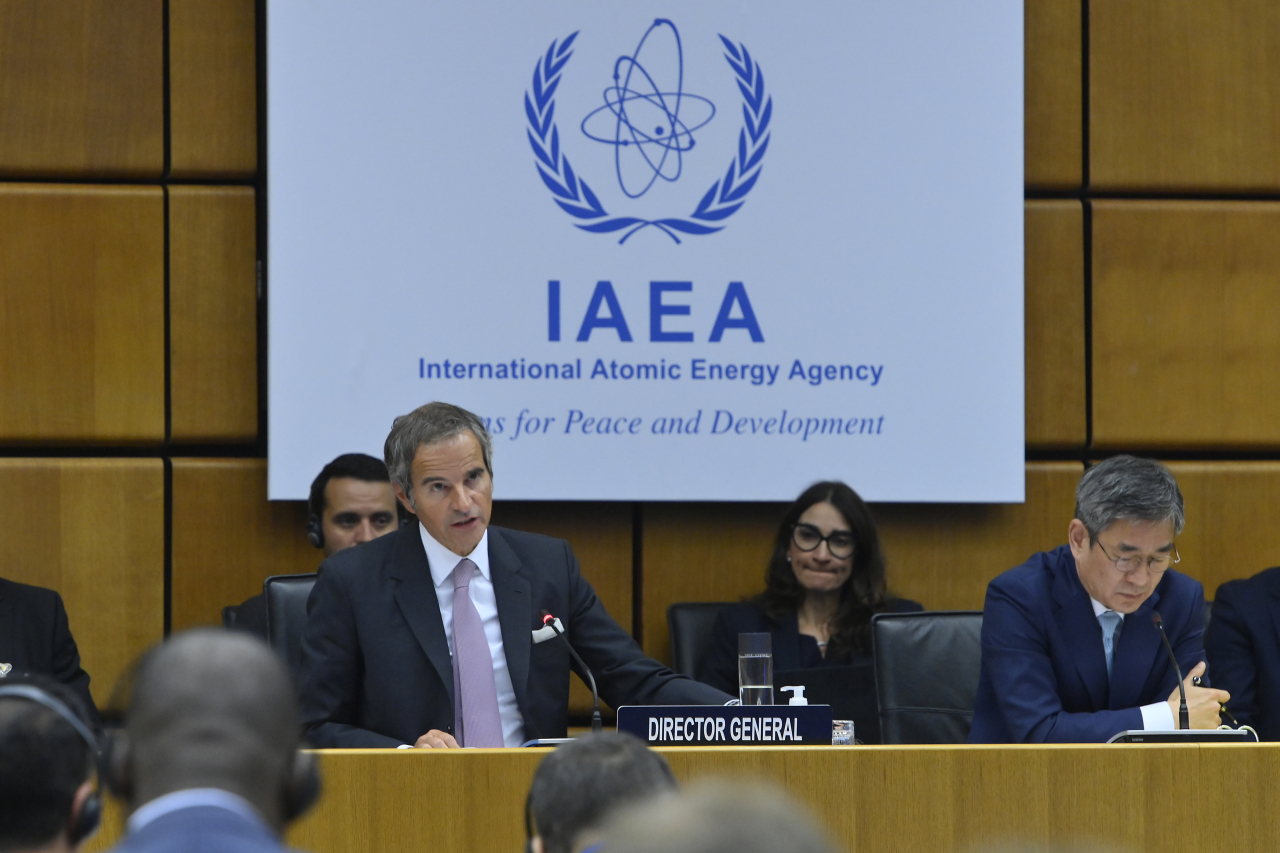 Rafael Mariano Grossi, IAEA Director General, delivers his statement at the 1637th Board of Governors meeting held at the Agency headquarters in Vienna on Monday. (Dean Calma/IAEA)
North Korea has operated and expanded its key uranium enrichment facility at the Yongbyon nuclear complex, the head of the United Nations’ nuclear watchdog agency said Monday, reiterating North Korea’s readiness to conduct a nuclear test.

Rafael Mariano Grossi, director general of the International Atomic Energy Agency, said the agency has observed multiple indications that suggest North Korea’s pursuit to produce the plutonium and uranium required to manufacture nuclear weapons and conduct a nuclear test, during a meeting of the Board of Governors in Vienna on Monday.

The IAEA’s assessments are in line with North Korean leader Kim Jong-un’s recent public pledge that he will never be the first to renounce nuclear weapons, which he labeled as the country’s “absolute force” and “national dignity.”

Kim underscored that “there will be absolutely no denuclearization first and no negotiation to that end” in his policy speech on Sept. 8 after North Korea adopted a new law legitimizing the possession of nuclear weapons and nuclear buildup at the meeting of the Supreme People’s Assembly.

The IAEA chief said on Monday that North Korea has expanded the centrifuge enrichment facility, which is a part of the uranium enrichment plant where North Korea produces weapons-grade uranium.

“We have observed indications that the reported Centrifuge Enrichment Facility at Yongbyon continues to operate and is now externally complete, expanding the building’s available floor space by approximately one-third,” Grossi said in his opening remarks, without elaborating the purpose and impact of the new construction.

The construction of an annex in an area adjoining the existing uranium enrichment plant commenced in September 2021.

But experts had conflicting opinions on the purpose of the annex when the construction commenced began.

At that time, the California-based James Martin Center for Nonproliferation Studies said the expansion could aim to increase the production of highly enriched uranium, explaining that the new area of around 1,000 square meters is sufficient to house 1,000 additional centrifuges.

The think tank assessed that the expansion of the enrichment plant could be part of North Korea’s efforts to achieve North Korean leader Kim Jong-un’s order to produce “super-sized nuclear warheads” at the eighth party congress in January 2021.

Washington-based 38 North shared similar sentiments. But it also said the new building could be a “small pilot or demonstration plant to test more advanced centrifuges” which is analogous to the Pilot Fuel Enrichment Plant in Natanz, Iran. 38 North added that the new construction could be a “centrifuge assembly workshop, to facilitate the replacement of centrifuges as needed.”

North Korea stated that the centrifuge enrichment facility contained approximately 2,000 centrifuges arranged in six cascades with an enrichment output of 8,000 separative work units, or SWU, per year when the US delegation led by Dr. Siegfried Hecker at Stanford University visited the facility in 2010. North Korea also claimed that the facility was operating and configured to produce low-enriched uranium.

The IAEA chief also said on Monday that the construction of “several new buildings” near the light water reactor, or LWR, has been completed. The LWR, which is fueled by low-enriched uranium and estimated to have a capacity of 25-30 MWe, has been under construction since July 2010.

The IAEA has detected ongoing indications that the main 5-megawatt nuclear reactor, which can produce weapons-grade plutonium, at the Yongbyon nuclear complex, Grossi said.

Additionally, ongoing signs of activity have been detected at the Kangson complex, which is believed to be a centrifuge enrichment facility, as well as the Pyongsan Uranium Concentration Plant and its associated Pyongsan Mine.

The Pyongsan Mine and Concentration Plant are believed to be the sole publicly acknowledged places where North Korea extracts uranium ore and turns it into yellowcake that can be used to produce enriched uranium.

Grossi also said in his briefing that the IAEA has detected signs that Tunnel No. 3 at the Punggye-ri nuclear testing site has remained active and is prepared to support a nuclear test.

“The reopening of the nuclear test site is deeply troubling. The conduct of a nuclear test would contravene UN Security Council resolutions and would be a cause for serious concern,” the IAEA chief said.

But the agency has not observed extensive work around Tunnel No. 3 at the nuclear test site in Punggye-ri in Kilju County of North Hamgyong Province during the summer months.

In addition, the IAEA has “very recently observed renewed work on the road leading” to Tunnel No. 4, which has not been used for a nuclear test.

Grossi previously explained that the road construction “had resumed by late-August” after several weeks of suspension in his report “Application of Safeguards in the Democratic People's Republic of Korea” submitted to the Board of Governors last week.

The IAEA observed work to shore up portions of the washed-out road that led from the support area to Tunnel No. 4 and No. 2 during June before the temporary suspension.