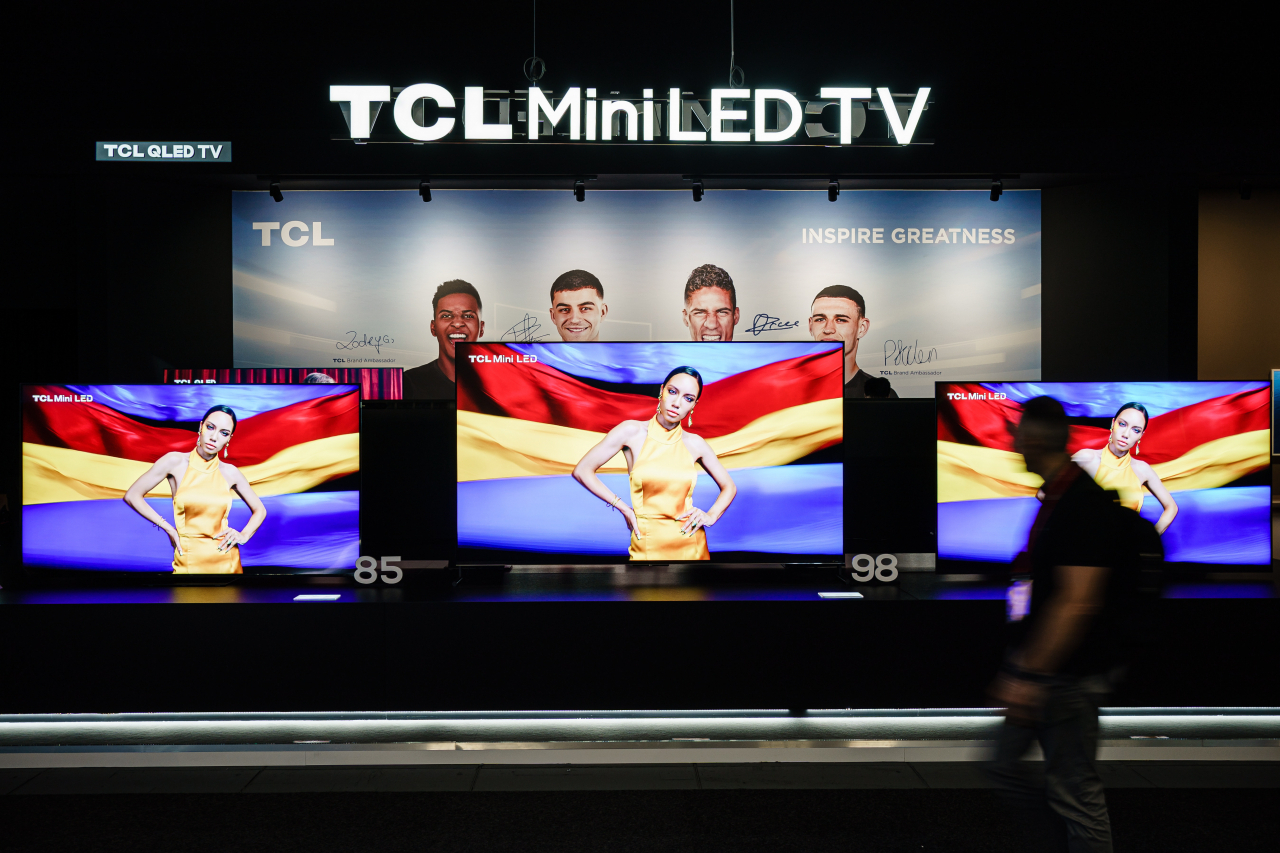 TCL’s TV sets are displayed at its exhibition booth at the IFA trade show in Berlin. (AFP-Yonhap)

BERLIN -- At this year’s IFA trade show in Berlin, the world’s top two TV makers -- Samsung Electronics and LG Electronics -- both stressed that they will focus on upgrading the user experience and not the hardware itself.

The South Korean tech rivals said they aimed to meet different consumer demands, especially those of younger generations, by offering more diverse products like a rotating TV for horizontal viewing or a bendable TV for gamers.

Their emphasis on user experience is also an answer to their fierce competition with Chinese runners-up that are rapidly catching up in terms of sales.

“China’s TCL and Hisense are competing each other for growth like Samsung and LG did in the past,” an executive from a Korean tech company said on condition of anonymity.

He especially pinpointed TCL as a more potent player that is posing a direct threat to its Korean rivals.

“What makes TCL more formidable is the fact that it has its own display-making unit -- the same strategy of Samsung and LG,” he added.

In the early years of LCD TVs, when Japan’s Sony was the No. 1 TV maker, Samsung and LG, then fast followers, started investing heavily in producing panels through their display-making units, which allowed them to secure competitive pricing.

After decades, the Korean duo has become the world’s No. 1 and No. 2 TV makers with a combined market share of almost 50 percent, while Sony has fallen to a distant No. 5 with some 7 percent market share.

Now TCL, equipped with its own display-making unit CSOT, is mimicking the success story of Samsung and LG.

“Such a vertical integration strategy will help improve product quality and pricing strategy of their TVs in the future,” the executive said.

Another official from a Korean company who also wished to be unnamed said the gap between Korean and Chinese TV makers has been narrowed to less than 10 percent.

“When it comes to LCD TVs, there is little difference. That’s why Korean companies are betting big on high-end models like OLED TVs that are harder to produce but are more profitable,” he said, adding it would take two to three years for TCL to catch up with Samsung and LG.

But he stressed that the long accumulated experience remains the key strength of Korean brands.

During COVID-19 lockdowns in major Chinese cities, Chinese TV makers turned their eyes to overseas markets like the US and Europe but faced high entry barriers, he said.

“Unlike Samsung and LG, Chinese brands have little experience in meeting different standard requirements from numerous broadcasting stations around the world. It would take some time for them to bolster their responsiveness in overseas markets,” the official said.

LG’s vice president of the TV customer experience division, Paik Seon-pil, also said he feels the pinch from China’s growing presence in the TV market but stressed the company retains an upper hand in the premium segment.

“Chinese brands may be able to catch up on TV production but we still gain an upper hand on processors exclusively designed for OLED TVs,” he told reporters at LG’s IFA exhibition booth.

LG, an unrivaled market leader in OLED TVs, is diversifying its OLED TV lineup, and debuted two new models -- the world’s largest 97-inch OLED TV and a bendable OLED TV for gamers -- at the IFA.

At the IFA, Samsung introduced its “lifestyle TVs” that appeal to different preferences and lifestyles of younger generations in efforts to differentiate itself from rivals.

“One big trend in the TV market is that millennials and Gen Z do not consider TV an essential item any longer,” Chung Kang-il, senior vice president at Samsung’s TV business division, told reporters at Samsung’s exhibition booth.

“As we are adding new features to TVs, we are reviewing repositioning TVs as a new screen with multiple functions.”

Samsung, who has focused on QLED, an upgraded LCD, recently returned to the OLED TV market after a nine-year hiatus, raising speculation about a strategic shift in its TV sales.