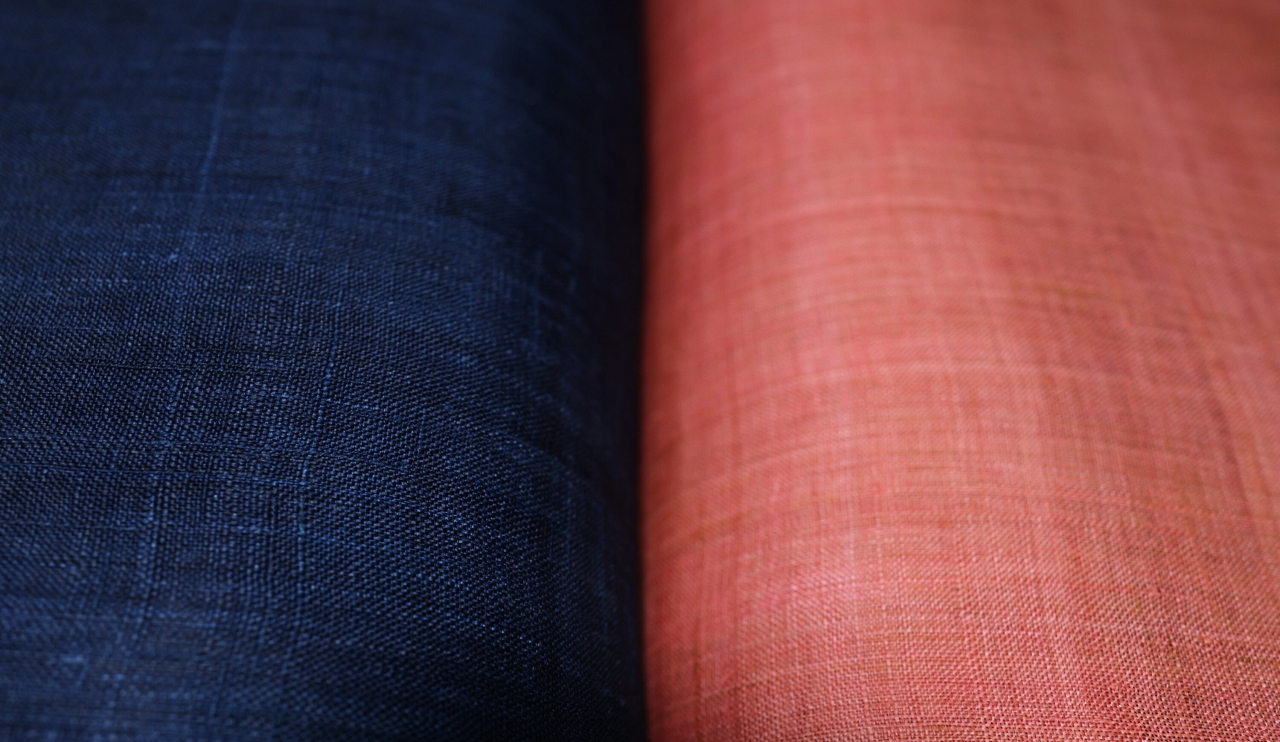 For more than a thousand years Koreans have been vat-dyeing fabrics and Hanji with indigo dye, one of the oldest natural sources of blue dye, made with the leaves of the indigo plant.

The indigo plant, called jjok in Korea, not only adds varying intensities of blue to Korean clothes, but fabrics with the blue dye also repel mosquitoes, snakes and ticks. Extracts from the leaves have also been used to treat various skin and respiratory ailments.

The colors in children’s clothes strike a balance with nature: blue for spring, white for fall, red for summer, black for winter and various shades of yellow representing the land.

"Blue comes from indigo, and yellow and red from safflower. With these three primary colors, it is possible to produce all the colors of the rainbow, as well as black,” said Choi Ok-ja, 77, a master of indigo dye, who lives in Andong, North Gyeongsang Province. 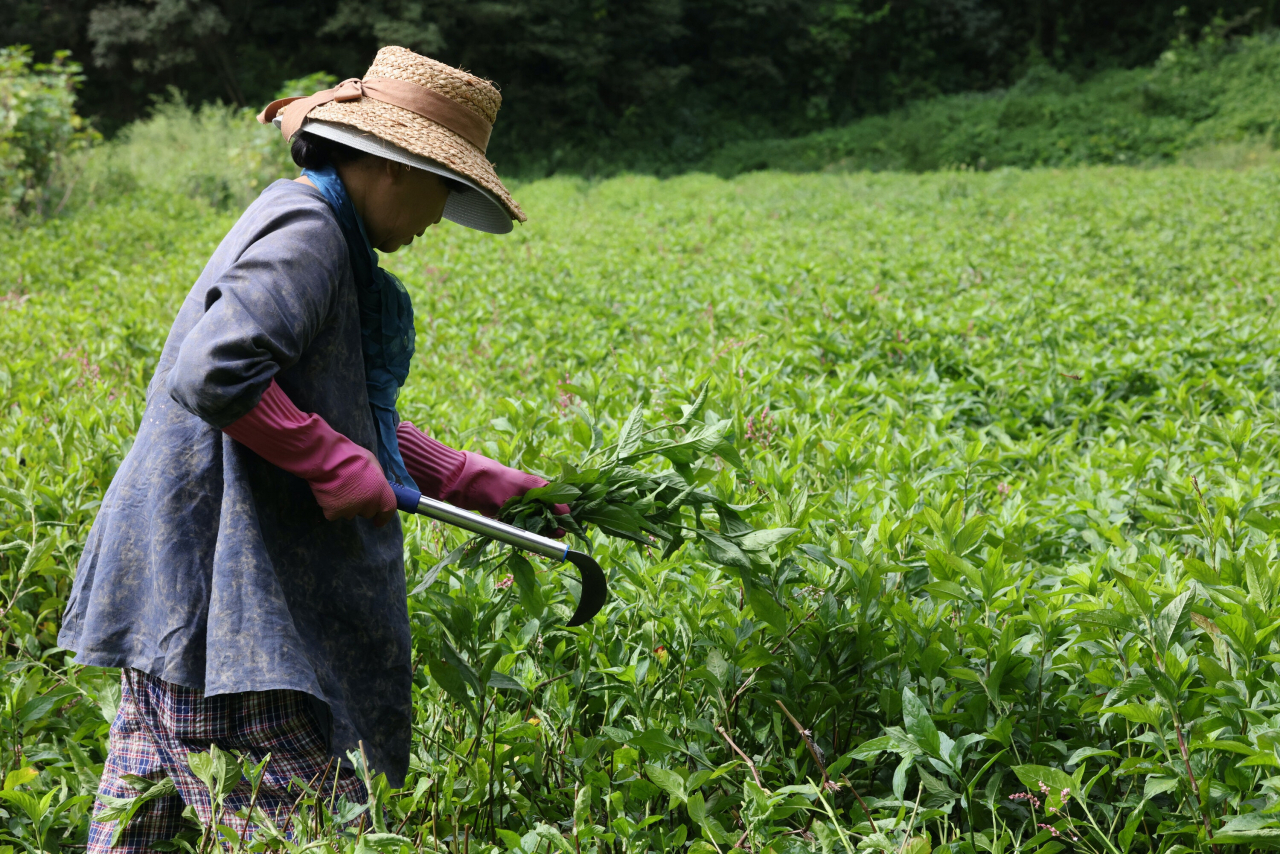 Choi maintains an organic farm full of vegetables and indigo plants behind her home, all grown without chemical fertilizers or pesticides. She harvests the green leafy parts of the indigo plants twice a year before they flower.

To create the indigo dye, the leafy plants are submerged in water to extract the blue pigments. The process, called ninam, uses fermentation with specific nutrients to produce dye. 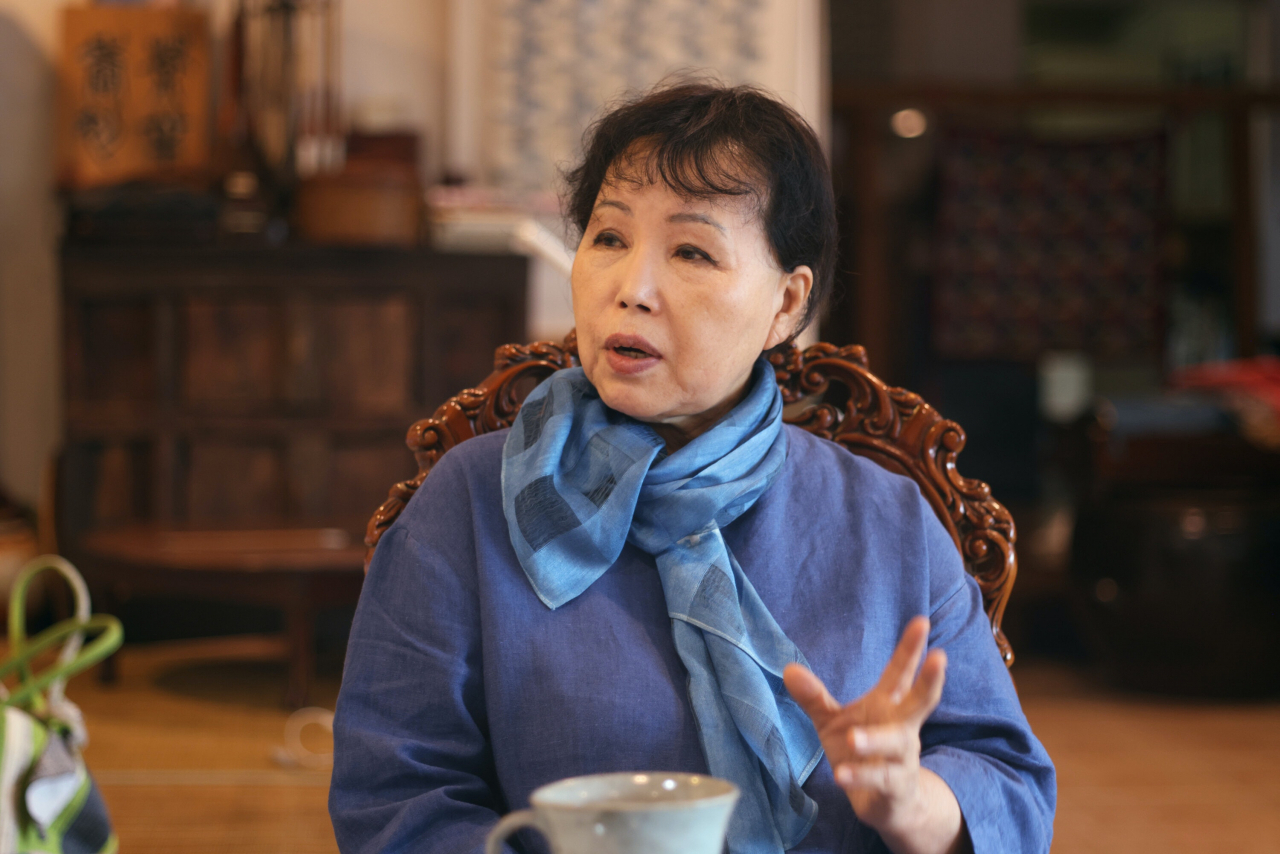 Choi got interested in indigo dyeing some 36 years ago while teaching the tea ceremony in Japan. A Japanese counterpart was wearing a kimono with a colored underlayer which she was ashamed to admit was made with synthetic colors. The traditional kimono was dyed with natural dye.

Impressed with the vivid blue colors in the kimono, Choi decided to research the art of making indigo dye.

"When the royal court was disbanded in the 20th century and the Korean War (1950-1953) followed, the art of dyeing clothes came to a screeching halt. I felt challenged to learn and continue the art of indigo dyeing," said Choi.

Ironically, the Japanese indigo tradition originates from the Edo period (1603-1867) following the Japanese invasions of Korea of 1592 to 1598. At that time, the retreating Japanese army kidnapped skilled Korean dye workers who were made to continue the art in Japan. 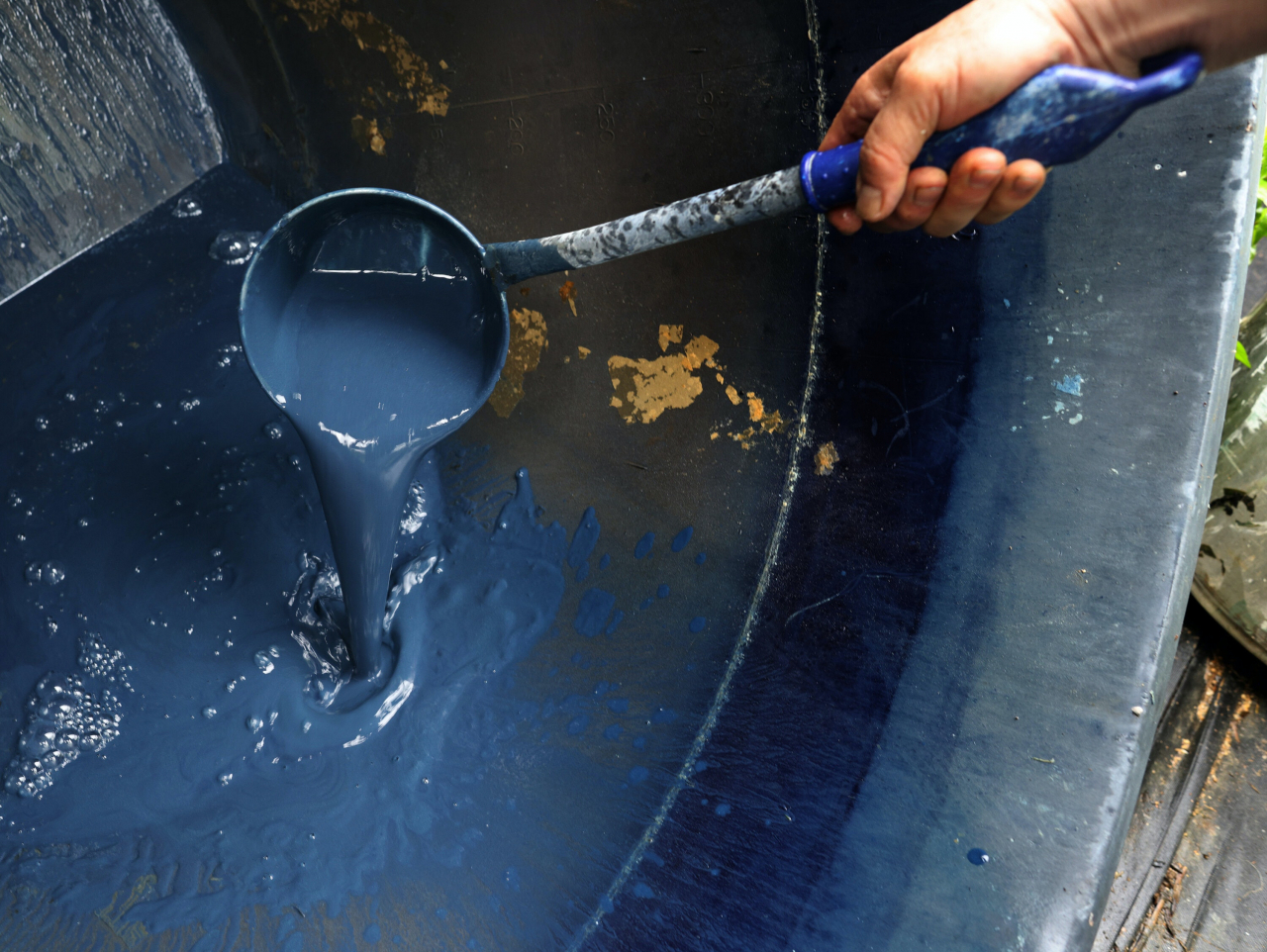 “I finally figured out how to successfully make the indigo dye using only organic materials. I used natural lye to make the indigo dye. None of the byproducts from my process are harmful or unsafe for the environment." said Choi.

"Extracting pigments from the indigo leaves is about 10 percent of the work. Another 10 percent is fermenting it. The rest of work is aging the indigo for about 100 days," said Choi.

The indigo vat is heated and kept at 36 degrees Celsius at all times to facilitate fermentation. The onggi jar is kept covered and a daily dose of jocheong, a grain syrup, is stirred into the mix, providing the crucial nutrients needed during fermentation. 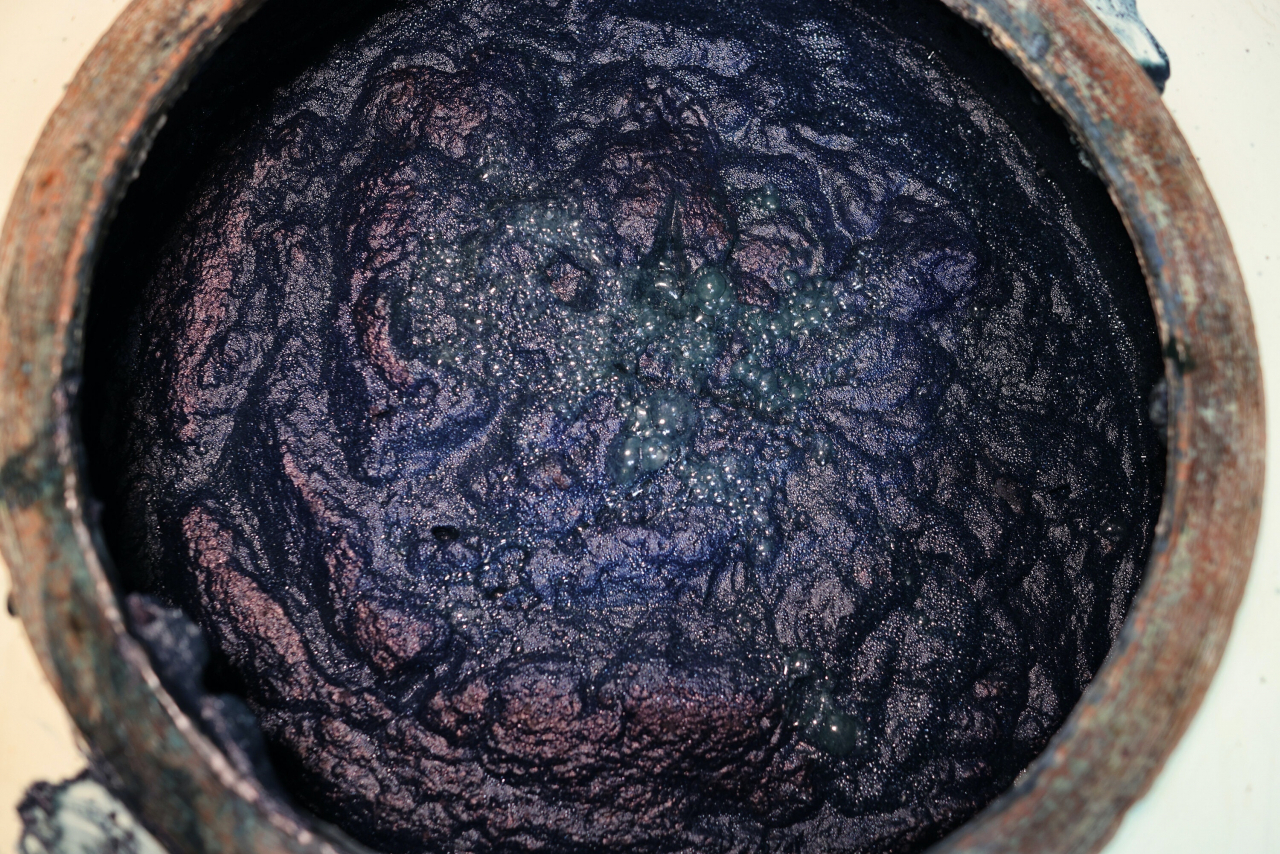 When dyeing silk scarves, Choi makes every effort not to let the scarves drop to the bottom of the vat. When removed, the scarves come out of the process with a green color that gradually, magically turns blue as they are exposed to oxygen.

Once the scarves are washed thoroughly, they are neutralized with vinegar before they are hung to dry and packaged for sale. A duty free shop at the Incheon International Airport sells Choi's scarves, all of which are colored with indigo dye.

"Indigo dye workers cannot be away for more than three days. We have to feed the grain syrup daily to provide nutrition to the microbes in the vat," said Choi. Her close watch on the process pays off with treasured indigo cloth, an amalgamation of Korean culture and artisanship.