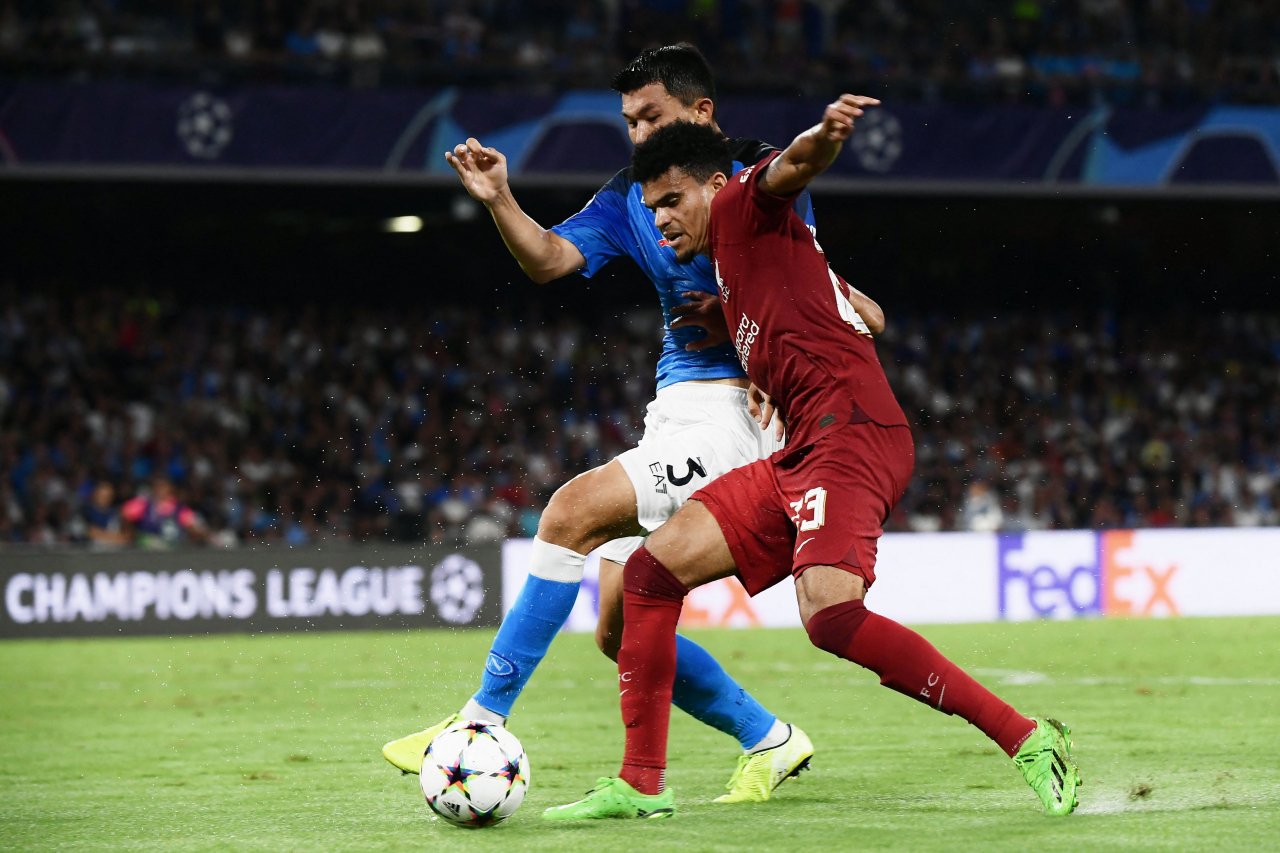 In this AFP photo, Kim Min-jae of Napoli (L) battles Luis Diaz of Liverpool for the ball during the teams' Group A match at the UEFA Champions League at Stadio Diego Armando Maradona in Naples, Italy, on Wednesday. (AFP)

Son Heung-min of Tottenham Hotspur and Kim Min-jae of Napoli, the only two South Koreans in the UEFA Champions League this season, each enjoyed a win in their first group stage matches at the top European club competition.

In his Champions League debut, Kim played the full match at center back, as Napoli hammered Liverpool 4-1 in their Group A opener at Stadio Diego Armando Maradona in Naples, Italy, on Wednesday (local time).

In Group D, Spurs blanked Marseilles 2-0 at Tottenham Hotspur Stadium in London on Wednesday, with Son drawing a pivotal foul that sent an opposing defender out of the match.

Kim, who joined Napoli this year after a stint with Fenerbahce in Turkey, has helped his new club to an undefeated start in Serie A with three wins and two draws. And the streak continued in continental play, as the Italian side shocked Liverpool, the Champions League runners-up last season led by Mohamed Salah, the co-Golden Boot winner with Son in 2021-2022.

Piotr Zielinski fired the opening salvo for Napoli with a penalty in the fifth minute. Though Victor Osimhen missed the second penalty for Napoli some dozen minutes later, the Serie A side did double their lead in the 31st minute, courtesy of Andre-Frank Zambo Anguissa.

Giovanni Simeone made it 3-0 Napoli late in the first half, and Zielinski scored his second goal of the evening two minutes into the second half to put the match out of Liverpool's reach.

Luis Diaz had Liverpool's lone goal in the 49th minute.

Son has not yet scored in six Premier League matches so far, and his luck did not change in the Champions League.

He got the start despite his early-season scoring woes and contributed to Spurs' victory in another way. In the 47th, Son went on a fast break after taking a pass from Harry Kane. Defender Chancel Mbemba challenged Son from behind and was sent off on a straight red card.

Richarlison netted both of Tottenham's goals, in the 76th and then the 81st. Son was subbed out for Matt Doherty in the 85th minute.

Spurs have not yet lost this season. They have four wins and two draws in the Premier League. (Yonhap)