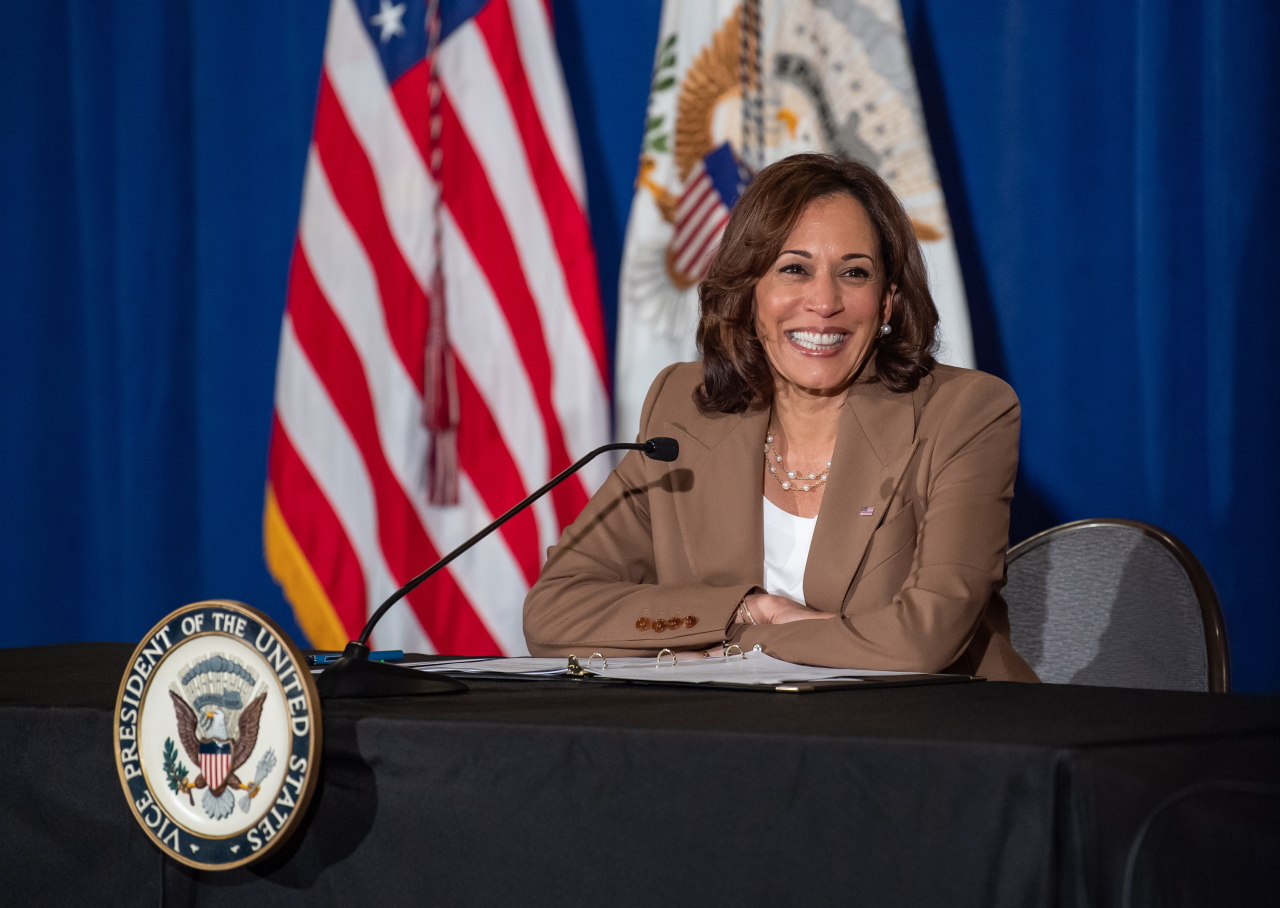 US Vice President Kamala Harris speaks during a roundtable discussion with local leaders after attending the annual Greater Boston Labor Council breakfast at the Boston Park Plaza Hotel in Boston on Monday. (EPA-Yonhap)
Anticipation is growing here for top-level negotiations on the US Inflation Reduction Act that Korean electric-vehicle makers say would hurt their business, following news of a possible visit to the country by US Vice President Kamala Harris.

Harris is reportedly coordinating a visit to Seoul to meet with Korean authorities after going to Japan to attend the state funeral of assassinated former Japanese Prime Minister Shinzo Abe on Sept. 27, according to local government authorities.

If her Seoul visit is arranged, it will be her first after South Korean President Yoon Suk-yeol came into office in May. The US vice president is also expected to travel to other Asian countries.

Harris’ spouse, US second gentleman Douglas Emhoff visited Korea earlier this year as part of the US delegation to attend Yoon's inauguration ceremony.

During Harris' visit, the Korean government is expected to deliver its concerns regarding the US IRA that was signed into law on Aug. 16. The new law that encompasses health care, taxation and climate measures, would take away tax benefits given to Korean electric vehicles being sold in the US upon implementation.

Under the IRA, only EVs assembled inside North America are qualified for the US government's maximum tax subsidies of $7,500. For Korean automakers, including Hyundai Motor and Kia, that means the IRA lowers their price competitiveness, as they build their flagship electric models in Korea.

Amid rising concerns, the South Korean government has relayed the industry's worries and asked to establish a channel to the US where they can discuss measures to minimize the negative impacts the IRA has on Korean automakers.

Seoul believes that the new US law violates the US-Korea free trade agreement, and has also considered bringing the case to the World Trade Organization for a possible violation of the “most favored nation” principle.

US National Security Council Coordinator John Kirby on Monday said the US is ready to engage in serious consultations with South Korea on the IRA issue.

At the same time, Kirby mentioned that the IRA does offer benefits to foreign manufacturers.

"We take their concerns seriously as always, and we certainly stand ready for serious consultations," Kirby said in an online press briefing when asked about national security adviser Jake Sullivan's meeting with his South Korean and Japanese counterparts in Hawaii last week.

After meeting with Sullivan in Honolulu, Kim Sung-han, Seoul's national security adviser said they agreed to have the US NSC look into the concerns of the Korean EV industry.

"We will have more details in the coming months as we begin the domestic rule-making process," Kirby said.

"But I would refer you to the Department of Energy's website, which does contain some initial information about makes, vehicles produced in North America that are eligible for the tax credit, which obviously include foreign manufacturers."

Kirby also highlighted how the bilateral cooperation of Seoul and Washington would help them meet their "clean energy goals and reduce costs."

"The Republic of Korea is one of our strongest allies and very close economic partner in the region," the official said. "So we share a common commitment to addressing the climate crisis and we are also committed to boosting electric vehicle manufacturing, infrastructure, innovation -- all those things that are going to help us meet our clean energy goals and reduce costs to create jobs."